We’re crowdfunding! Please help us manufacture our limited run of 250 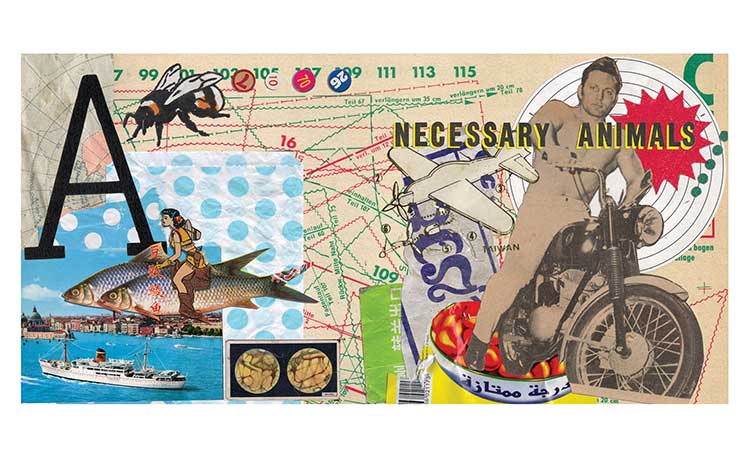 Spoiler Alert! No Messianic Pronouncements! But this is a prophecy. For true understanding Animals may be Necessary.

I know everything there is to know.Nice line. Not mine. I know because I’ve just been told. It sticks with you once you know and you find yourself smiling – even if you’ve been told you’re wrong all your life – at the glib irony. Like it’s totally unnecessary. If anything that’s the key to this album. I could be Jesus and it wouldn’t show, trickles syrup-ily through Amanda Thompson’s seductive tonsils. “Reality is not a hole in the ground, a sigh, a whisper or any kind of sound…” poses the notion irony could be our core’s subtext, before pathology attempted to map life. But don’t look-think too deeply. Its levity, like a feather twirling up a thermal, refracts a sunbeam to highlight the fun inits profundity. That’s what you get from people experienced enough in the music of life to deliver these youthful jibes in catchy throwaway hooks. It’s all as necessary / unnecessary, depending to your dogma. It’s a dichotomy to me. See what I did there?

The easy melodies imbue. You find them looping subconsciously, forming between the lips as you calculate the diminishing elliptical logarithmic cotangents of stone-skimming trajectory; tweezer that rogue eyebrow hair in the mirror; wire-brush your panther-headed door knocker, its dried-chilli rust spores stinging your nasal follicles; abseil the Eiffel; watch detergent bubbles paisley fractals swirl and dissolve eventually to white with black polka-dot, then colourless before they burst above your lasagne dish; or simply as you wipe your arse whilst on the loo. This is the depth of its intimacy. Its spells secrete involuntarily as sweat globules when your skin tingles.And I know because it happened to me after the first listening and still occurs, five weeks after listening to the album for only the 4th time.

I know because I’ve seen and heard enough to know I’m picky as a listener, a sensualist, a hedonist, a somewhat jaded and irrelevant sound producer. But I’ve little time for pretentiousness, especially if it’s no fun. Sublime is another entity entirely. It comes from somewhere ethereal that resonates, sometimes by lottery, sometimes from nostalgia and often from exploration. But even in its simplest form it rises out of intuitive craft and mature sensitivity that delivers knowing tweaks to sweet-spots at the right place at the right time.You’d look hard and long to find anything individually new, ground-breaking or unique, in this album, except for the rare subtlety in the varied compositions of its musical contributors – to whom Keith Rodway and Fritz Catlin give equal credence – combined with the chic transcendent harmonies of Thompson, Ingvild Deila (with only a cheeky hint of a formerly rogue princess fallen to the dark side) and Melody Wescott. A million miles away from cliché but truly far ‘more than the sum of its parts.’ Feel the quality and the width. The width is there, no short blanket, it’s sensuality you could snuggle and suffocate in if it didn’t levitate above you like satin on a breezy summer solstice night in the Caymans. Addictive touch. Because music is always felt almost before it is heard. ‘Dark side of the moon,’ ‘Kamakiriad,’ are stunningly sensuous and sonically symphonic, different genres, but they are not my addiction. They stuff me with sound, groove and good emotions, like eating the richest chocolate fudge cake. Necessary Animals are like slurping a Delta chocolate cone in a 42 degree Palaeokastritsa haze; the ‘mmm’ ‘mmm’ ‘mmm’s just keep coming and as soon as the bitter dark chocolate solid surprise coats your tongue, you think, ‘fwwoooerrr, I could just down another of those.’

All communication is imperfect and Necessary Animals (band of the album name) are exceptional at it. I sense Rodway doesn’t always write definitive lyrics to always make sense, even to himself possibly. There’s a freedom of discovery and letting things cut their own path.  And whatever their significance to him, he doesn’t mind whatever we interpret. The alternative ‘Revelation’ is not that Jesus has left us to it – not in the glorious ascension of the faithful, but on the 10.20 from St Pancras, nice touch there – nor in the reassurance, “Don’t be afraid, don’t be afraid, get your house in order…” like the judgment is pending. There is none. “Let’s make lemonade” might be the thing that occurs to you to complete the chorus, but no matter – the point is, it will occur. It’s in the sumptuousness of intuitive invention that combines such exquisite comforting chord sequences and contrary bass line, to leave me feeling, ‘awwww I could stand this kind of massage for eternity.’

Analogue is often described as more comforting tonality than digital. The discrepancy very hard to locate and a dark art. But here’s where the arguments cease. The polemic– usually puritanical sectarianism deriding each other’s imperfections – is shown here to be totally unnecessary and impotent, like most Judeo-Christian factions, missing the point entirely. Pre-digitation production had to get it right, when things were far less complex, more fluid and far more skilled as a consequence, but what is right? Analogue could offer only an estimation but was far richer than anyone expected then and still shocks us in the advent of digital, which still requires taste and craft. Rodway’s and Catlin’s ears eke out constant surprises for us, consummately sensual, buff, lush and fresh every time they’re unwrapped. The musical imperfections and connotations just as rich, sweet and stimulating without preaching hard-hitting Americanised evangelistic fist-thumping body blows. Its emphasis on allowing the instruments to speak and breathe and merge. Original low-tech, no Nord-ic simulation. Allowing static finite recording preferences to stand up and assume their own identity is no less or more valid and the combination affects the feel and flow, depth and levity, the way it feels to be dizzily buoyed up and down in a lively sea swell, or primordial volcanic soup Jacuzzi. If you’ve never done either you’re in for a treat.

Crashing to shore cascade Simon Charterton’s arms (which would be described digitally as ‘crosstalk’) at times rattling his entire kit, as if he’s playing in a discarded fuel tank bobbing over the surf – you feel his physicality without him showboating or sledgehammering your door down. And there’s just as much pleasure in a jazz brushed snare as there is in a looped sampled shaker in ‘Time Lord,’ its crafty oscillations hypnotic and restful as a cicada on diazepam. The live hollow rattle and hum of Charterton in one of the record’s potential hit singles – ‘Talk to me’ – gives way entirely to the neatest electronic beat box without a hint of crosstalk or affectation. Just groovy in its seamless segue. As dusk falls and ‘Darkness comes over the hills’ the perversely ring-modulated snare brushes and kick lead us by collar and chain into our basements, where the most taboo of pleasures are found; Steve Finnerty’s(Alabama 3) sinuous guitar solo more intent on raising our eyeballs not on stalks but up into our eyelids. A fizzling fluid bass distortion that resists deep massage and tickles as tenderly as water droplets hitting a blacksmith’s anvil walks us ‘…To Babylon’ with cymbals so sweetly wafer-thin, you’d enjoy them on their own with nothing on. They’d disappear completely, spread on toast. The simplest sophistication is found on ‘Piano Thing,’ combining subtly abbreviated chord progressions with a subversive discordant accompaniment by students of Guildhall School of Music. These are random delicacies to be savoured.

I know at least one thing… it’s one thing to make good music. It’s another altogether to write good songs and it’s another again to make compositions that cling instantaneously as sticky bobs. What ever happened to sticky bobs? Like with classic poetry and literature and all art, music is hardly worth talking about without it turning into yet more peripheral noise or pure ego. Its enough on it’s own. It can’t be replicated nor adequately quantified, so what’s the point? The point is we’re equally creatures of pleasure and necessity. Pleasures to take us away from necessity or to bring us closer to our own, crucially by someone else finding then sharing it, so we want to.

‘Necessary Animals’ leave me (like Jesus did) pondering why humans invariably treat each other to the contrary. The antidote to high altitude spiritualised sermons and post-modernist sardonic psychobabble at disdain for the oft-described dystopian ‘human condition’ or Anthropocene, animals can’t be right or wrong. They tolerate the reasons we impale upon ourselves, as if we are the only unnecessary species on the planet, and who knows? Maybe pity us. But animals, necessary as they are, are also an indulgence – they indulge us. It’s hard to say music separates us from animals when a blackbird wakes us in the weary hour of 4.43am and we’re instantly seduced. Maybe Necessary Animals do just that – separate us from our unnecessary at the same time as we “the animals understand” within there are more fundamental incalculable resonant revelations that enlighten. Life will always throw up the hardest challenges to our core evaluations. Experiences we ultimately face alone. ‘Jesus, who needs it?’ we might think. But it’s inevitable and necessary. Invaluable when animals, who don’t attempt to know everything, help us equally let go, to chill with it and enjoy new connotations with each excursion, until we’re ‘gone’ for good.

Tweet
This entry was posted on 1 August, 2018 in homepage and tagged Kendal Eaton, Necessary Animals. Bookmark the permalink.