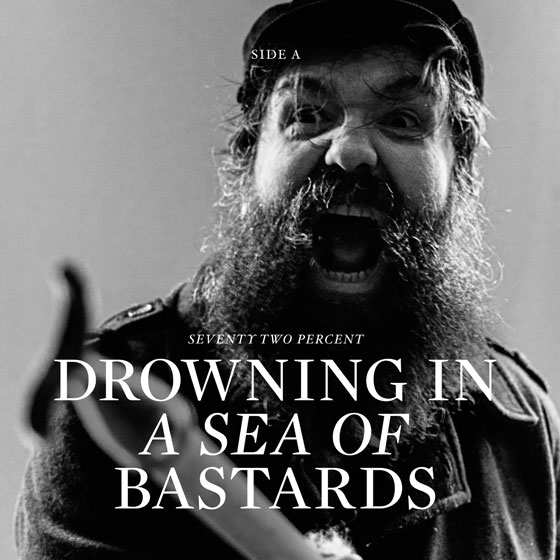 On Seventy Two Percent’s DROWING IN A SEA OF BASTARDS (Human Worth, 2021)

Can the sea scream? So it proves in Seventy Two Percent’s sea spiced single.
Released by Human Worth, here the value crests the fire and force of sound waves
Which batter the ear’s inner storm, retuning thoughts, carving chaos with which
This fresh lightning trio strike corrupted shores. No-one’s saved.

Guitarist Joe Brown’s video shows a monochromed bearded sailor,
Summoning Robert Eggers The Lighthouse, the rope at which he wrenches
Sinews like flesh – as he grapples against snake like weight and the light is seen
To flex in warped water. Felt, the piercing arc of the music exposes

The visceral strain of this test. With Brown and Josh Ryan’s guitars
And Joel Harries hell clatter, drums and strings become weather against
Which tide is shaped.  For this is a soundtrack hell sent as the bastards burn
Within water, and the struggle set in the promo find unique echo

In what listening does to a face. Recorded at Northampton’s The Lodge,
And produced by Harries hurried rhythms, Stephen Kerrison’s masters
Summon the song’s Ragnarok. After the hard whirpool mix in which strings
And drums thrash sounds oceans, and this noise craft’s engineering is oared

By Mark Cann and the cannily named Rufus Fox. Seventy Two Percent
Will complete with Modern Technology on Lorn, a joint album, where Chris Clarke’s
Bass and vocals and Owen Gildersleeves’drums  will present a unique vision for noise
As its own hidden language, heard in Drowning in a Sea of Bastards sheer power

As it communicates dark intent. You hear wind and weather and storm
And the chorus and scream of lost bastards, as well as those of the present
Warring with those bastards of old to usurp – the fears drowning grants
To the separated soul as they’re splitting, torn by both cold and terror

And imagination and foam, to seek worth, It is a rolling wave of pure sound
That creates the shore it is shaped by. At its pitch there is story carousing around
Sunken decks.  Your own soft cabin is smashed as each note spikes and thunders.
What the sea consumes is still fire as even Neptune awaits what comes next.

You can almost see him stand, sea staff poised, to spear  the bastard sharks
Drowning spirals, making this song the soundtrack from which legends learn.
In Brown’s video, our man sinks after the mist, as smoke seems to stoke him.
Clearly, for completion, the 72% he’s been living will soon be balanced
By a further 28 madness earns. Or possibly death,  or, retribution, or riot,
Caused by a vast crew of bastards making water weep: hope falls spurned.
But in the fire and force of this song and oncoming album, Neptune power thrashes
As he ‘air’ or ‘sea’ guitars plays unheard notes. And guitars and drums spark,

Making steam from boiled oceans that in three minutes thirty
Make this Seventy Two drown and float. Spirits ascend
Just as seas surround. Darkness fires.  From such bastardy you hear horror
As each King of sea and storm falls deposed.

View all posts by David →
This entry was posted on 6 March, 2021 in homepage and tagged 72%, David Erdos. Bookmark the permalink.