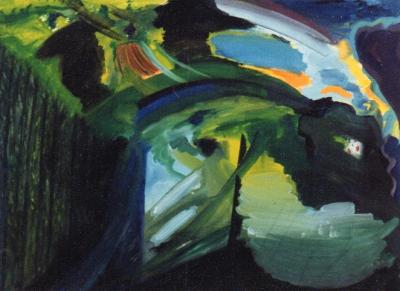 From a gently insidious dystopian future, a woman looks back on her life and the true love she knows she missed out on. Finally, she remains undismayed, confident that the human span isn’t everything… “Along a lane threaded through the night… threaded through space: so the colours and shapes had sung for over forty years. Of daylight inside darkness. Of reassurance. Of permanence beyond the transitory. Though its mysterious and variegated surface could not alter, its effect each day, was often subtly different. Kathleen had never tired of this painting, and it always narrowed the distance in years and personal space between her and the painter she’d once known. Several times they’d met when they were young, and so close in mind had she felt, that to her they’d stayed friends in a hidden parallel ever since – despite only the occasional letter to break the silence. Perhaps the song of these colours and forms welled from sentiment? Perhaps she’d buried her love in this painting… and its shifting planes, stood in for the man who would rarely have claimed more than partial responsibility for the work he signed? Moving away from the dark glass, her reflected face left the rim of the impulsive, breathing world beyond – a landscape frequently more promising than the intermittently anxious horizons outside. Passing an unexpectant chair, she had only wished before nightfall, to check the latch. Now, she needed to open the door, to renew her faith in the real world…”

Born at Hammersmith in 1962, Lawrence Freiesleben grew up in Aylesbury. Leaving home at 16, before long he moved to a caravan in Devon and began a peripatetic existence, painting and writing in many different parts of the country, staying in each area “for just long enough to remain unsettled.” Supporting himself when necessary with various temporary jobs, in the late 1980’s and early 90’s, as a qualified youth worker he enjoyed the company of a variety of age groups – from four year-olds to teenagers. His early, experimental novel The Bow, was first published in 1983. A revised edition (described by the late Colin Wilson as “full of brilliant ideas and images” and by Brian Louis Pearce as “A liquid, lyric prose achievement of a high order.”) was re-printed by the independent press, Stride, in 2000. In 2013 he completed Maze End, a literary/philosophical novel with supernatural overtones. Although not exactly conventional, this was considerably more accessible than The Bow. Certainty Under the Rose, a searching love story, was completed in 2015 and longlisted for the Tibor Jones Pageturner Prize in 2017. Currently he is working on a parallel story, Estuary and Shadow. All three novels are psychological dramas, with challengingly explicit as well as poetic elements. With his wife and the youngest of their children, Lawrence currently lives under the shadow of the Howgill Fells in Cumbria, in a kind of free poverty. Twice winning the Bridport Open Prize (for painting) he has held over 50 one person exhibitions since 1984’s show at the Margaret Fisher Gallery in Hampstead and contributed to numerous group shows. The most recent of these was on-line with the International Times.

When did you start writing?

What do you love about Short Stories?

Both their economy and their possible space – the freedom of interpretation

Do you write in other forms?

What distracts you from writing?

Too many pointless tasks and, inevitably, my children – though of course I don’t mean that unkindly!

Outside of writing, what are your other passions?

What is your favourite book?

Who are your favourite writers?

Where is your dream location?

Arcadia! But Sardinia, Dartmoor, the North Pennines, Cumberland and Westmorland are all pretty good

What one item would you put into Room 101?

Quad bikes and mobile phones – I don’t have either, but loathe their power to invade everywhere.

Do you have any advice for new writers?

If in doubt, be as intense as possible at first and then reflect. Unlike with painting, revision is nearly always creative. Never give up!

Tweet
This entry was posted on 25 October, 2017 in homepage and tagged Lawrence Freiesleben. Bookmark the permalink.