NO – 20 years of Stop the War – A Visual Retrospective. Last chance. 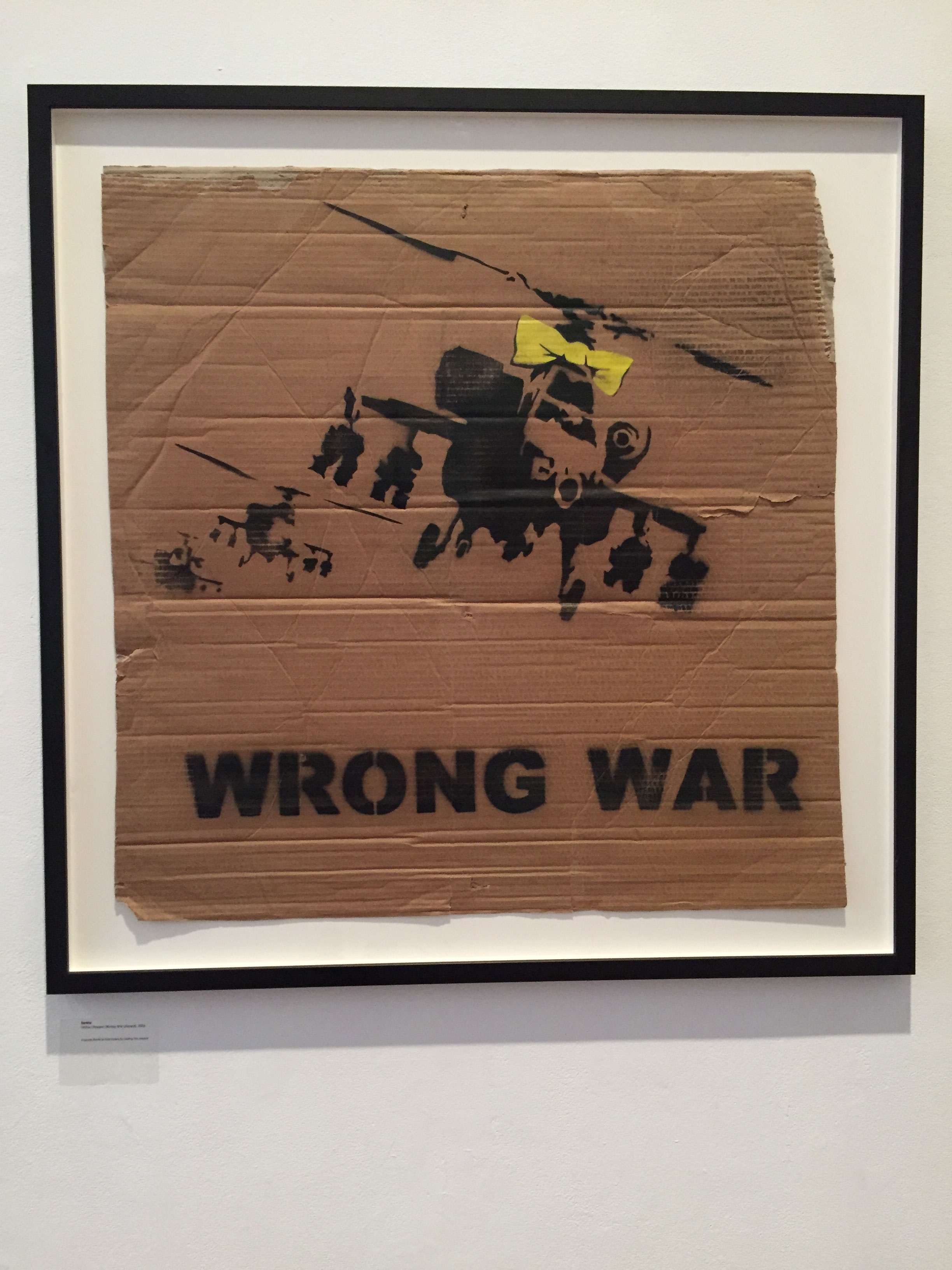 Image – Banksy – The Yellow Chopper (Wrong War Placard)  2003
Is this exhibition of artwork and related design a celebration or a commemoration? Well, it’s both.    We commemorate the dead and those whose lives have been changed forever by suffering, yet celebrate the founding of the enduring, effective and incredibly important Stop the War Coalition. Stop the War was established by activists and politicians after Bush and Blair reacted insanely to the attack on the twin towers of New York. Instead of hunting down the killers and bringing individuals to justice,  they invaded other people’s countries,  killing thousands. The ‘war on terror’  (using terror tactics of course) was born. Stop the War has consistently challenged all of this and given those who care to listen the geo-political truth: that this is all about ‘free’ markets and oil.  Stop the War organised the million strong march in London in February 2003. It could not stop the invasion of Iraq, but a global peace campaign was born. One of the exhibits is a clip from ‘We are Many’ a film by Amir Amirani, an account of the global protests against that war.   Protest with integrity has always inspired artists, and this show includes work by Banksy, kennardphillipps, Brian Eno, Vivienne Westwood, Martin Rowson, Robert Montgomery and Katherine Hamnett – among others.  Anger can spark creativity, and the truth conveyed in the flash of an image.  Note one of Banksy’s pieces The Yellow Chopper.  It tells it like it is – bypassing the hypocritical language of those who sought to justify the invasions of Afghanistan and Iraq.
This exhibition provides a brief history of the movement through art and design.  Catch it over the weekend at – Bow Arts Nunnery Gallery – 183 Bow Road London E3 2SJ .  Also, check out the website for related events for their 20th anniversary and analysis and statement on growing threats in the present.  For Stop the War is all about the present – from NO to NOW.   The new Aukus Alliance between the US, UK and Australia is a provocative one which can only heighten tensions with China. Unnecessary,  dangerous and all about neo-liberal trade alliances.  Stop the War convener Lindsay German says.
http://www.stopwar.org.uk/
Jan Woolf
.
Tweet
Tweet