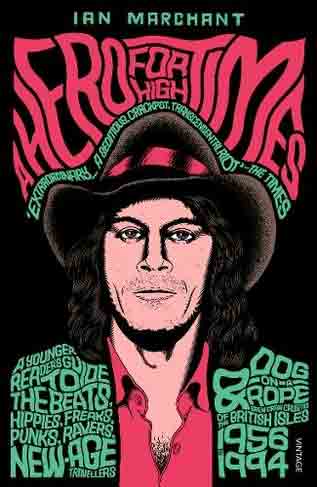 ‘Great,’ I thought, when I came across Ian Marchant’s book, ‘an alternative history of the counterculture by someone who was actually there. Perhaps my daughters will read it and realise our generation did try hard to change the world.’ How naive of me.

A Hero for High Times is subtitled A Younger Reader’s Guide to the Beats, Hippies, Freaks, Punks, Ravers, New-Age Travellers and Dog-on-a Rope Brew Crew Crusties of the British Isles, 1956-1994, an overlong but generously inclusive and all-encompassing sentence. Marchant also writes a foreword to his grandchildren, commending to them the ‘new way’ evidenced in his book, ‘[a] new way which allows people to live their lives how they choose, no matter what anybody else thinks or says’, although he is honest enough to admit ‘It didn’t work, […] of course it didn’t. But […] the Freaks tried to make it work.’

All well and good, all from an author who was there at the time (including involvement with international times), but it’s downhill from the foreword (or dedication) onwards. Marchant shapes the book as a story told by a friend of his, which allows Marchant to ask questions, and his friend Bob Rowberry – who may be real or simply an authorial device – to ramble on without consequence or focus.

It’s a version of a version of a half-forgotten story, and Rowberry and Marchant desperately need an editor. As it stands, this is a story full of asides and ramblings that lead nowhere: epic stoned philosophic discourse and longwinded ideas. It is a personal odyssey that remains personal, and whilst all stories need facts and specifics to make them real, they also need to engage with their intended audience.

To be honest, I simply don’t believe some of the stories here. Your mate imported the first Afghan coats into London? Of course he did. You were beatniks, hippies, travellers and established authors? Of course you were. This is social history and commentary as shaggy-dog story, as rambling pub talk near to closing time, this is nostalgia gone mad and over-the-top. Don’t get me wrong, at times the book is hugely entertaining and diverting, and I love recognising and revisiting old haunts as well as reliving concerts and events I was also at, but there’s too much hot air and verbiage here. 500 pages should have been 300 tops. I wanted Marchant to tell his story, his stories, simply and clearly, curbing the sexism and laddishness of the past as he did so. My daughters would have several things to say to him if they ever read this overlong digression. 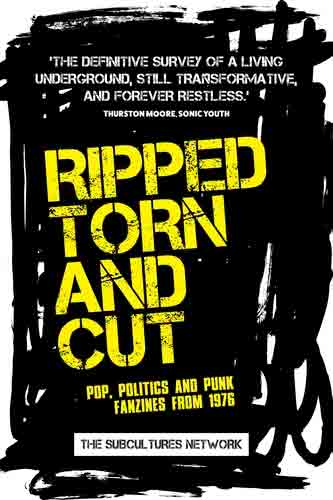 Better is Ripped, Torn and Cut, a book about Pop, Politics and Punk Fanzines from 1976, a rich mix of history, cultural critique, cultural theory, and memoir. Several editors, including the indefatigable Tom Vague and musician Nicholas Bullen, recall their early escapades into journalism, photocopying, mail order and distribution whilst others ponder the roles of politics and women in zine culture, and consider it (now) as history and (counter-)cultural phenomenon.

There’s also discussion of zines within specific genres, from goth to industrial music via indie-pop, as well as an outstanding consideration of ‘[T]he evolution of an anarcho-punk narrative, 1978-84’. The final section moves out of the UK to discuss RE/Search in San Francisco, and activities in the Netherlands and in Munich, as well as a chapter which time-travels forward to Riot grrrl in the 1990s.

It’s an immensely readable and enjoyable collection of writing which evidences – as the Introduction argues – ‘why (punk) fanzines matter’. It’s unafraid to question, unafraid to offer various versions of events or contrasting ideas and concepts. It is coherent in diversity, clear and readable despite its academic guise, and a welcome alternative and jolt-of-reality to Marchant’s euphoric but unkempt ramblings.

View all posts by Rupert →
This entry was posted on 23 November, 2019 in homepage and tagged A Hero for High Times, Ian Marchant, Ripped, Rupert Loydell, The Subcultures Network, Torn and Cut. Bookmark the permalink.