NO POETRY AFTER ADORNO 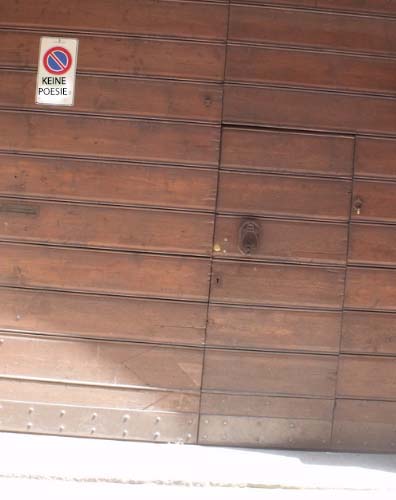 NO POETRY AFTER AUSCHWITZ
ADORNO

1. Adorno’s dictum is like Fukuyama’s ‘the End of History’, an infuriatingly untrue soundbite that only makes the philosopher look ridiculous. Melodramatic, arrogant, obsolescent, it looks ever more wrongheaded as the decades roll on. A groan of despair, it might have been excusable as a Facebook status update, but not as serious philosophy.

2. Its memorability is not in question. Its bombast is Nazi-like, wilfully irrational, an overweening hyperbole that cancels itself out. Its flashiness is such that it is understood and appreciated immediately, but quickly becomes untenable. It putrefies. What’s striking is the intellectual’s old trick of inverting common sense. The truth is that holocausts are barbaric, not poetry. After Auschwitz, the sound of the German language itself must have seemed barbaric. Adorno’s dictum not only sounds like a Nazi command, its prohibition of poetry is fascistic.

3. Does he mean that it would be barbaric for Germans to write poetry after Auschwitz? Apparently not. It would be equally barbaric for African or Irish or Chinese poets to engage with their craft after the ARBEIT MACHT FREI sign becomes the entrance to a museum rather than a circle of hell. However, such poets would laugh at Adorno. Marxist poets might defend him, but those who take the idea seriously are likelier to be academics. It becomes an abstract discussion — a hypothesis — for those for whom the artform is not a way of life, the ‘idle chatter’ that Adorno was supposedly warning against. He is excused his famous phrase because it is part of a ‘complex deliberation’. His defenders don’t like to see his complexities simplified; simplified, they look silly. In fact, despite his American exile, he was thinking too much within a Germanic linguistic and cultural prism, and assuming its universality. For poets, writing poetry after Auschwitz became an important task. In England, Geoffrey Hill is one of many poets who have self-consciously written poetry after Auschwitz. Sylvia Plath is a poet, arguably barbaric to the bourgeois ear, whose Nazi imagery challenged the ‘gentility principle’ of English verse. What does Adorno think poetry is for? He thinks it has failed to halt civilisation from descending into chaos. Poetry is about healing, not preventive measures. Poetry is not CND.

4. Was it barbaric of Paul Celan to write ‘Death Fugue’? No, but it offended the gentility principle, especially as he intoned it like a Jewish cantor. Does ‘the aesthetic principle of stylization and even the solemn prayer of the chorus, make an unthinkable fate appear to have some meaning’? (Though Guernica doesn’t count, because it’s before Auschwitz, does Cubism betray those who suffered there?) ‘Death Fugue’ is not guilty of Adorno’s charge. It is a sorrow song. Its chorus is a solemn prayer. It is, as we all know, the ultimate refutation of the Adorno claim. Is Celan’s oeuvre a decades-long act of barbarism? Hardly. His suicide is arguably an act of barbarism but no one would bother to think of it as such if it wasn’t for the Adorno dictum. It is also painful to imagine that had Adorno’s philosophy carried the weight of a law, if he had been a philosopher king, his decree might have made it impossible for Celan to write. There is something Urizenic about the dictum which Anthony Rudolf calls ‘grandiose and jealous.’ Celan wrote: ‘No poem after Auschwitz: what sort of an idea of a “Poem” is being implied here? The arrogance of the man who hypothetically and speculatively has the audacity to observe or report on Auschwitz from the perspective of nightingales and song thrushes.’ Later, an uneasy friendship developed but Celan remained disturbed by Adorno. His prose-poem ‘Conversation on a Mountain’ casts Adorno as ‘Big Jew’ to his own ‘Little Jew’. Another poem meditates on Adorno’s discarded Jewish surname, Wiesengrund. Adorno’s later essay on Celan is, subtextually, atoning for the erroneousness of the dictum. Even there, he gets it wrong again. He hails Celan as ‘the greatest exponent of hermetic poetry in present-day Germany’. Celan, though, was always adamant that his poetry was not hermetic: ‘ganz und gar nicht hermetisch‘.

5. Adorno’s defence that ‘it expresses in negative form the impulse which inspires committed literature’ is sophistry. Adorno’s dictum is impulsive, yes, inspiring no. Of course, he is a type of the poet-philosopher, who writes with Nietzsche in mind, and aims for aphorism, but there are gaps – even black holes – in his observations. His own aria is from Negative Dialectics and is itself a highly stylized meditation with a highly solemn, prayer-like chorus. Another of the refrains runs: ‘No word tinged from on high, not even a theological one, has the right to exist after Auschwitz unless it has undergone a transformation.’ Elsewhere he seems to disqualify himself: ‘All culture after Auschwitz, including its urgent critique, is rubbish.’ Though he seems to rubbish his own urgent critique, he is as involved in its utterance as a concert tenor. He is totally exempt from his own dictum.

6. Adorno’s notion is over-dependent on such academic qualifiers as ‘reification’ and ‘aporia’. It is a philosophical abstraction that doubts everything but itself.

7. Why didn’t he say ‘to write philosophy after Auschwitz is barbaric’? This would have displayed some humility. Or, if he couldn’t be that humble, or was really trying to say something about the arts, why didn’t he say ‘to compose music after Auschwitz is barbaric’, or ‘to paint pictures after Auschwitz is barbaric’? The answer is that he was a good writer (when not factory-producing conundrums for the Marxist market); neither of these variants would have had the same effect. Yet we are supposed to see ‘Auschwitz’ as a synecdoche for the Shoah, as we are supposed to see ‘poetry’ as a synecdoche for the arts. The real effect of his aphorism is to appeal to deep-rooted prejudices against poetry.  The origin of those prejudices is Plato, another philosopher, and an ‘enemy of the open society’, according to Karl Popper, alongside Hegel and Marx. Adorno’s philosophy is here inexcusably thoughtless. As he carried on philosophizing after Auschwitz, so the poets kept on writing, painters painting, composers composing etc. He casts a slur on poets, and by extension the arts, but doesn’t extend it to all the humanities, or specifically to philosophy. Poetry, often insulted, now receives its ultimate kick in the balls and becomes a scapegoat for the holocaust. Note, there is nothing morally deficient in his channelling the nightmare of history into his philosophy, but poets attempting the same thing are barbarians. Redolent of the ancient dispute between philosophy and poetry, it also reminds us of the modern conflict between academia and bohemia. Adorno’s judgement is that of an arch-academic looking down his nose at the arts. One is reminded of another of his preposterous judgements on the black jazz musician blowing his instrument who only thinks he’s free, but isn’t. For Adorno, ‘jazz’ was the musical equivalent of ‘the gentiles’.

9. Adorno is — without acknowledgement — merely reprising the attitude of the Dada movement to World War One. As he screams his litanies from the agon of the present moment, he’s forgotten the past, against his own warnings. (Interestingly, Dada’s contribution to poetry is negligible, with the honorable exception of sound poetry). Adorno is also alluding to Benjamin’s more general but still highly questionable statement ‘there is not one document of culture which is not at the same time a document of barbarism’. Was it barbaric of Marvell to write ‘An Horation Ode Upon Cromwell’s Return from Ireland?’ I’m Irish, I don’t think so. It was poetic… Was the poetry of World War One barbaric? Was it barbaric of the Sumerians to write city laments after their towns had been sacked by ememy tribes? How long does the ban on barbarism last? Is all mid-20th century poetry to that of the present day barbaric? Adorno claims to find himself at ‘the final stage of the dialectic of culture and barbarism’. But that dialectic — like history — is ongoing and far from its final stage. ‘Auschwitz’, as Adorno elsewhere stated, is also a synecdoche for ‘genocide’, and genocide was nothing new. His ‘After Auschwitz’ motif becomes tiresome; we don’t wish to tell him about Treblinka, Dachau or Belsen in case he bursts a blood-vessel. More and more it seems to stand for ‘After Adorno’. Most poets writing after WW2 wrote in the twin shadows of the Holocaust and the atom bomb. Did anyone notice any Japanese drama-queens announcing that ‘to write poetry after Hiroshima is barbaric’? The Shoah is not the only atrocity with which humanity, and artistry, has to come to terms.

10. Adorno knew he’d got it horribly wrong but couldn’t refrain from wriggling on his own hook. Retractions followed, and retractions of the retractions: ‘Perennial suffering has as much right to expression as the tortured person has to scream; thus it may have been wrong to say that after Auschwitz poetry can no longer be written. Not wrong, however, is the less cultural question, whether after Auschwitz living is possible at all; whether it’s at all permissible to him who by chance escaped but should have been murdered; this is the drastic guilt of him who was spared. As revenge he is plagued by dreams that he no longer lives but rather was gassed.’ Life after Auschwitz was of course possible, albeit very very difficult. Chil Rajchman’s memoir Treblinka was written by an escapee who lived a long, married life in Uruguay until 2004. Life after Auschwitz was only impossible for those who had died there. Yes, it became impossible for Celan — not a survivor of the camps but whose parents had been exterminated — who nonetheless had the choice to commit suicide. Adorno shamelessly plays on sympathy for the survivors in yet another bungled attempt to somehow justify his dictum. Contemplating his ‘poetry is impossible/life is impossible’ parallelogram, we are then forced to reconsider his dictum as being applicable only to Jews who had survived the camps. Wiesengrund, the son of an assimilated Jewish-turned-Protestant father and a Corsican Catholic mother, turns to the survivors of the last stage in the culture/barbarity dialectic, and commands: ‘NACH AUSCHWITZ EIN GEDICHT ZU SCHREIBEN IST BARBARISCH’.

View all posts by Niall →
This entry was posted on 11 September, 2012 in homepage, Uncategorized and tagged Conversation on a Mountain, Grosse Jew and Kleine Jew, Negative Dialectics, nick victor, No oetry after Auschwitz, No Poetry after Adorno, PaulCelan/Theodore Adorno, Theodore W. Adorno's dictum, To write poetry after Auschwitz is barbaric, Wiesengrund. Bookmark the permalink.