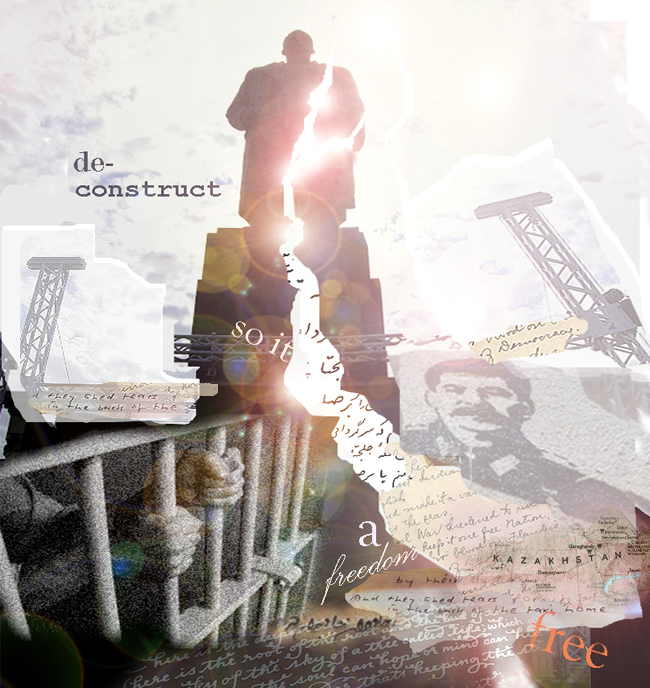 …And we fought against the Soviet system
For the INDEPENDENCE of the Kazakhs
Spending our youth in prisons
Going through the circles of GULAGs.
The dedicated heroes and sages make HISTORY
But the fruit of their efforts is stolen by crooks.
Yesterday and today the same men
— The Soviet apparatchiks — are holding the power.
And again the return of the STALINIST system:
“No person – no problem!”
And again everybody keeps schtum
for fear of imprisonment.
The deaths in strange circumstances:
ERIC, NAGASHBAI, MICHAIIL, MUSTAFA,
TEMIRTAS, NURBOLAT,
Murders of ZAMANBEK and ALTYNBEK,
“SHANYRAK” burned down
And we are captives forever.
Journalists are murdered for a single word of TRUTH —
ASKHAT, NURI and BATYRKHAN —
And randomly thrown into prison….
EVGENY, TOKHNIYAZ, ERMEK and RAMAZAN!
The personality cult and cult of charisma
and again the dark era of STALINISM,
the tyrant’s bloody hand on the wheel
turning KAZAKHSTAN into NURLAG.

Translated from Russian by Alfia Nakipbekova with minor adjustments by Niall McDevitt.

(Note:  “Nur” is a reference to Nur-Otan which is the main political party in Kazakhstan headed by Nursultan Nazarbayev. Aron Atabek has been recently been given two extra years in solitary confinement, on top of the 18 year sentence he is already serving).