Obama and the State of the Onion Address 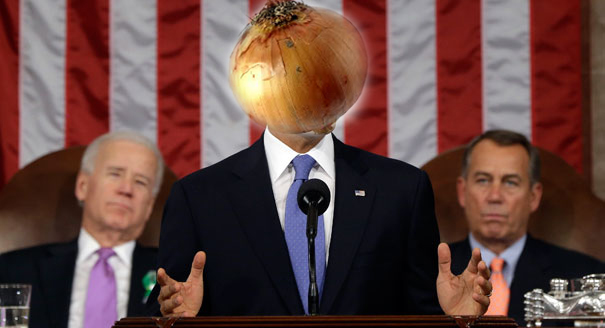 Apparently, the President had ingested some kind of weird drug, because when he stepped to the podium he didn’t look at the teleprompter. He just started talking.

“…like every other recent President, when I take to this platform I’m expected to tell a certain number of lies dressed up as the truth. And believe me, folks, I had a few whoppers ready to go.

“But now I feel like doing something else. I’m not going to delve into the many scandals of my administration, because examining them and taking them apart and exposing the lies would keep us here all night and into tomorrow.

“Instead, I just want to explain my overarching agenda. It’s the same agenda every modern President has fronted for. I’m not really doing anything new. That’s a myth.

“You see, in order to become President in the first place, I had to sign on to the scheme to debase, throttle, and weaken this country. I have my methods. Every President has his own.

“Weakening America is part and parcel of Globalism. Ultimately, America will not the lead the way into what has been called the New World Order. International heavy hitters, bankers, and corporations will carry that ball. America will go along, with its population of sleeping masses.

“So-called Pax Americanus, or imperial American empire, has been shelved, in favor of a much larger operation.

“My basic job is allowing all this to happen, so we end up with a global management system, in which the individual is enmeshed.

“With some degree of accuracy, you could say that everything I’ve been doing is a smokescreen to obscure the march of Globalism.

“We politicians view humans at large as dangerous and badly programmed biological machines. Until new programming can be inserted universally, we keep things in check. We hold the fort.

“I’ll allow the expanded militarization of local police forces. I’ll intercede, wherever possible, to stop individuals from living off the grid. I’ll try to mangle the spirit of self-sufficiency in whatever form it occurs.

“I’ll assist mega-corporations. I’ll keep as many doors open for Monsanto as I can.

“You get my drift. It’s business as usual. In my case, I’ll try to up the ante and intensify the collapse of America.

“Did someone put something in my cigarette or coffee? I’m telling the truth. It feels strange, very strange.

“Anyway, here’s to One World under one authority. It’s the only solution to our problems. Trust me, I wouldn’t mislead you. Give up, give in, take the ride. It’s not so bad. Resistance is a fool’s errand. The people who are running things are out to destroy independence. Let them. By the time they’re finished, you’ll see that ‘equality’ isn’t so bad.

“One final random thought. Agents of the US government killed Martin Luther King. In case you didn’t know that. Good night and good luck.”