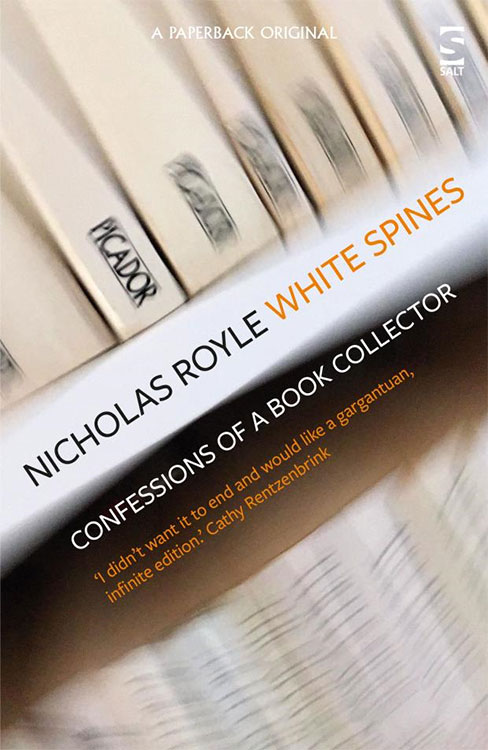 Nicholas Royle’s book is obsessive, witty, informative and entertaining. Well, actually, I guess it’s Nicholas Royle who is obsessive (etc.) and making confession to the reader with this book, which is subtitled ‘Confessions of a Book Collector’.

Royle collects white-spined Picador books, which were published from 1972 and into the beginning of the 21st century. Like him, I can remember bookshops with Picador spinners and checking them out for new titles; and when I got to the end of the book and read the list of books Royle has found, I was surprised how many I own or have owned in the past.

Research has shown that not many readers actually collect books by specific publishers, which kind of makes a mockery of series design for books and the idea of reader loyalty. But Picador certainly had an entirely justified reputation for great cover images on experimental and innovative texts, be they by the likes of established writers like Samuel Beckett, Herman Hesse and Borges, or new authors like Russell Hoban and Iain Sinclair.

Truth be told this book is about far more than book collecting, because the nature of that addiction involves travel, visiting secondhand bookshops, writers and readers, notebooks, lists, and storage solutions. Besides, Royle isn’t just a collector of Picadors. Oh, no, he collects things left in secondhand books – messages, tickets, lists, postcards and other ephemera, King Penguins, Picador anomalies without the white spine, overheard conversations, his dreams and friends’ comments. And he pretty much walks everywhere.

So this book is also about secondhand bookshops around the UK. Royle is great at conjuring up that smell of fading paper and musty rooms, and describing book piles, sagging shelves, and how things are ordered (or not) wherever he goes. If at times, I violently disagree with his assessments (Alnwick’s Barter Books is one of the worst shops I have ever visited: a severe disappointment) he more than makes up for it with his informed reports of bookshops I don’t know, and his love of Oxfam shops, as he breathlessly digs around for Picadors he thinks he doesn’t already have.

Often, of course, he does, but Royle has a shelf of spares and is also willing to trade, swap or acquire a better copy of something he already has. In addition to interesting inserts he can also be persuaded by annotations, previous owner’s names, dedications and inscriptions – things which put me off buying any book! But Royle, who is a writer, editor and publisher as well as a collector, likes sleuthing, finding out who these previous owners are. He seems to have a knack of finding copies owned by people he knows – often other writers, or tracking down likely suspects online.

He’s also happy to be distracted in his quest, as all book collectors are, by previously unknown editions, publishers and authors who look interesting, not to mention chatty booksellers  and/or other shoppers. Some of these people and shops turn up in dreams – the book is punctuated by short surreal scenes from the land of Nod. Others stay in the real world and Royle has got to know them over the years and we get short intriguing histories and asides about their activities, interests, business strategies, other employment and interests.

He’s also got to know a number of authors and readers who share his passion for Picadors, as well as people who worked for the publisher. His book is full of correspondence and conversations with those who share his enthusiasm for the books and authors they published. And discussions about the hierarchies of collections and the nature of collecting. There is no self-doubt though: Royle is totally committed.

It’s really all an excuse to digress, and having found himself that excuse Royle has excelled himself. White Spines is not in any established sense an autobiography, but actually it is: here is the world Royle lives within, networked into all areas of writing, reading and publishing. It even made me briefly reminisce about and become nostalgic for how Foyles bookshop in London used to have separate shelves for each publisher. Nicholas Royle must have loved it!

View all posts by Rupert →
This entry was posted on 12 February, 2022 in homepage and tagged Nicholas Royle, Rupert Loydell, White Spines. Bookmark the permalink.