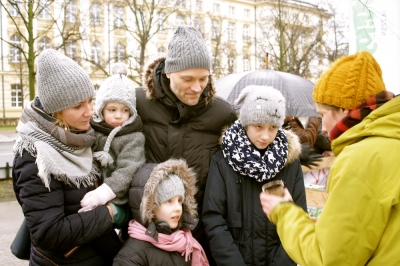 Something rather remarkable is happening in the middle of Poland’s capital, Warsaw, and it’s not exactly a capital city spectacle. In fact, rather the opposite.

Tucked-away under a line of trees, opposite the Prime Minister’s Palace in Central Warsaw, is a small ramshackle camp, comprising two tents, a Second World War wood fired mobile cooking apparatus, some chairs and benches, a pile of logs and a number of banners, posters and logos.

This is ‘Green City’ a symbolic and actual site of occupation by farmers fighting to save their livelihood and way of life. At the time of writing, it is in its 28th day of existence – and it isn’t planning on going anywhere, in spite of the fact that it is illegal and suffering under a daily fine imposed by the Polish government. A fine which is, in many ways, a small replication of what is happening on a much bigger scale to farming communities throughout the European Economic Community and beyond.

At Green City, a name affectionately bequeathed upon the camp site by local Warsaw well-wishers, the fourth shift is taking place. A group of thirty farmers is replacing another similar sized group which has been ‘in residence’ for the last week.

A huddle of farmers gather around as hot vegetable soup is served from the wood fired dispenser. Conversations break-out with supporters who arrive sporadically with gifts of food and other items. In amongst the protesting farmers is Edward Kosmal, the owner of a mixed family farm in Zachodniopomorskie Province in North West Poland, and leader of the resistance to the ‘land grabs’ that are taking place there.

A strongly built, quiet and thoughtful man, Kosmal has resolutely refused to give-in to government intransigence and deafness to the farmer’s calls for fair treatment. His emergence as farmer’s leader is both welcome and necessary. A steady and determined hand on the helm is critical to the staying- power of this grass roots uprising which has already been hailed as the single largest farmers protest to have ever taken place in Poland.

In February, six thousand farmers marched through central Warsaw to the very spot where the ‘Green City’ now stands. Its inauguration took place on that day.

On the other side of the road from the camp, a military police officer stands impassively in front of the main entrance to the Prime Minister’s vast Palace. Other police patrol slowly up and down, keeping a wary eye on the activities that bubble up at the Green City camp site.

One such activity is the birth of the ‘Academy of Self Sufficiency and Health’, a series of workshops, slide shows and films, demonstrating the practical techniques of self-sufficiency – and offered by enthusiastic  farmers and their supporters – who strongly oppose the globalisation of food and farming under vast transnational agribusiness corporations.

Corporations that cream-off any profits to be made in the agriculture sector so as to enlarge their empires at the expense of the small and medium sized family farmers who uphold the traditions of good land management practices and nourishing, wholesome foods. Foods that will not be found on the shelves of the ubiquitous super and hypermarkets that have come to dominate Polish society, in just the same way as they have in North America and  Western Europe.

The farmers who squat down beside a log fire, a welcome source of warmth during the cold Polish nights, listen to the talks with a growing curiosity. They are here because the land that they and their families wish to farm, in perpetuity, is being stolen from under their feet.

Stolen by a government that is more interested in the profits to be made by selling-off its prime agricultural land to the highest foreign bidder, than retaining it for indigenous farmers to ply their trade and keep the nation fed with the ‘real foods’ that Poland is famous for. These farmers are not prepared to see their lives ruined by short-term profit hunters.

They have been steadily stepping-up their protests for three years now. Blocking the government land agencies responsible for doing the deals that undermine their futures.

In the streets of Szczecin, a large market town in Zachodniopomorskie Province, farmers picket the main regional land agency, while on surrounding roads their tractors have kept-up a regular convoy, Polish flags fluttering from their cabs and poster messages stuck in the windows. The public is broadly with them. Eighty percent of the land area in some regions of Zachodniopomorskie have already been sold-off, according to Edward Kosmal. Another farmer added “I woke up in the morning to find I had Danish and German neighbours.”

Some seventy percent of citizens of Szczecin have come out in support. They see what’s happening and fear a total take-over – once the buying of Polish farmland by foreigners becomes legal in 2016.

With the support of The International Coalition to Protect the Polish Countryside, the farmers added two further demands to the Polish government: establish a proper, legally enforced ban of GM crops and seeds and end the exceptionally harsh regulations that demand registration, licensing and separate processing premises before any farmhouse foods can be legally sold to the Polish public.

Then there are further demands, made by hard-pressed farmers from East Poland, that they be compensated for deeply unfair historical milk quota allocations that have left many dairy farmers with no internal demand for their dairy products, as cheap imports pour in from Western European Countries with two or three times higher quota allocations.

There are also demands for proper land inheritance regulations and compensation for being victims of the Russian embargo of Polish and EU foods. An embargo established as a counter to the EU penalising Russia for illicit actions that it accused Putin of carrying out in Ukraine.

Uncontrolled wild pig damage to large areas of crops is yet another problem that has negatively impacted upon farmers’ incomes. In Poland, farmers cannot carry guns and all hunting and vermin control is carried out by government employed registered gamekeepers.

Edward Kosmal explained how nearly all farmers in his area (and it’s broadly true across Poland) are heavily in debt to the banks they took out loans with, so as to purchase modern tractors and other farm equipment suitable for the commercial farming enterprises they were encouraged to undertake when Poland joined the EU in 2004.

The advice came from Government Advice Offices for farmers, which espouses the ‘restructuring’ of farms so as to fit the typical Western European agribusiness model. The one based on a drive for increased exports with its attendant knock-on effect of more monocultural farming practices, higher synthetic fertilizer applications, more pesticides and ever bigger and more expensive farm machinery.

The financial pressures that this aggressive push for higher export revenue puts on farmers who have borrowed heavily in order to fulfil these recommendations – are ubiquitous throughout farming communities from one end of the world to another. They hardly ever lead to sustained higher incomes to the farmer, as costs regularly outweigh returns and (in Europe) only EU subsidies keep the farms from bankruptcy.

In the UK, this situation has led to one farmer taking his life every two weeks, rather than witness his life’s work taken away by the bank to whom his farm is indebted. In Poland, the subsidies are smaller, in accordance with the size of the farms, but also due to the fact that they are only paid at 50% percent of the rate received in Western Europe.

Back at Green City’s Academy of Self-Sufficiency and Health, the discussion comes around to this global debacle that Polish farmers now find themselves swept-up in. Poland’s EU membership and pro EU government mean that officialdom fully espouses the capitalist neo-liberal free-trade model. The model that leads to globalised factory farming regimes supplying the dominant supermarket chains – while simultaneously decimating the health and diversity of the natural environment with their vast sterile monocultures.

One can appreciate why there are some intensely serious expressions on the faces of the participating farmers. After all, Poland remains one of the last bastions in Europe of large numbers of small scale, semi self-sufficient farmsteads. Still around one million with an average size of just seven hectares.

Farms that are synonymous with the non-commercialised, low input and bio diverse characteristics of pre EU agriculture. The typical self-sufficient family farms that have been trampled on by the European Union’s utterly insensitive common agricultural policy (CAP).

Now those who followed the government’s advice to expand and intensify their commercial activities – the hallmark of ‘restructured’ EU farming incentives – are faced by the unpalatable probability that their bank loan supported expansion efforts have simply driven them onto a tread-mill. A tread-mill which renders them permanent slaves to the corporate/ government/ Brussels ‘Troika’, and ensures that the independence they once enjoyed – has become a rapidly fading dream.

But maybe this is not, after all, the end of the story. The spontaneous arrival at Green City of the clandestine Academy of Self-Sufficiency and Health, has brought into focus a new/old vision that just could be exactly what the doctor ordered; not just for Poland, but for struggling farmers everywhere: a renewed commitment to supplying the nation, the region and the local community with home grown ‘real foods’, produced by time honoured methods that bring genuine health back to the soils, plants, animals and humans that are the true beneficiaries of a caring and benign approach. An approach that gets the nation off the chemical, GMO and synthetic food killer fixes that threaten to achieve complete dominance of the globalized food chain.

Have we arrived at a turning point? One which exposes the failed model of the profit driven, tax payer subsidised, monocultural madness that has brought mankind to the edge of a cliff – beyond which lies complete ruination?

Two weeks ago, in early March, ICPPC leaders Jadwiga Lopata and Julian Rose, delivered two loaves of ‘legal’ chemically enriched ‘USA style’ plastic wrapped white bread to Prime Minister Ewa Kopacz. A week earlier, accompanied by the Solidarity Farmer’s Union chief, they had offered her a basket of ‘illegal’ real farm food’ with a letter demanding a change to the regulation that criminalises such foods and the farmers that produce them.

The USA style white loaves were a reward for her failure to respond. They were accompanied by a letter explaining this, signed by ICPPC’s President.

We aren’t giving-up. Spring sunshine is replacing the cold grey days of winter. Soon the farmers will have to return to the fields to plant their crops.

But the resistance will not come to an end. We’re all in it for the long-term. The Academy of Self-Sufficiency and Health, planted as it is at the heart of this resistance camp, will bring into all our minds the possibility of a life in which we are no longer slaves to the insentient and power obsessed Brussels, corporate, government cabal; but become once again independent farmers, supporting and supported by the communities in which we grow and share our real farm foods.

Julian Rose is an early pioneer of UK organic farming, an author, activist and President of The International Coalition to Protect the Polish Countryside. His acclaimed book ‘In Defence of Life’ is available from www.amazon.com and book stores, as well as from Julian’s website www.julianrose.info