‘Of Dylan and his Deaths’ by Heathcote Williams 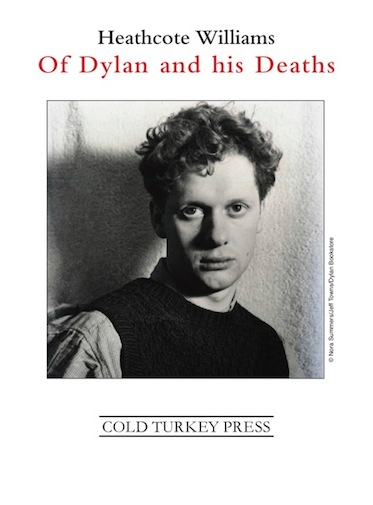 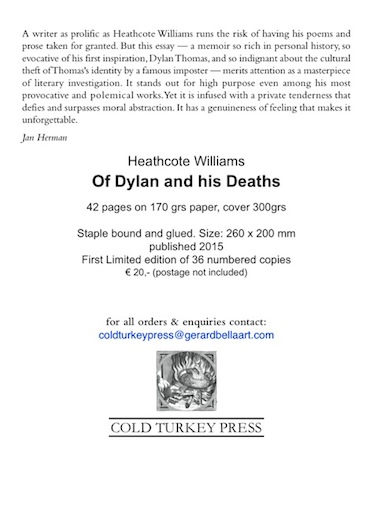 A writer as prolific as Heathcote Williams runs the risk of having his poems and prose taken for granted. But this essay — a memoir so rich in personal history, so evocative of his first inspiration, Dylan Thomas, and so indignant about the cultural theft of Thomas’s identity by a famous imposter — merits attention as a masterpiece of literary investigation. It stands out for high purpose even among his most provocative and polemical works. Yet it is infused with a private tenderness that defies and surpasses moral abstraction. It has a genuineness of feeling that makes it unforgettable.

I asked Dylan Thomas’s trusted friend, the Welsh poet Vernon Watkins, how Dylan had thought of his own poems, and he said that Dylan had called them “statements on the way to the grave.” There was a doleful pause. He went on quietly, “Dead poets can be your contemporaries you know, that’s if the whole of the past is a simultaneous experience, and it is. In which case …” He studied me closely. “Dylan’s right here now, you see. He’s sat at this table. Not dead.” And then he repeated it, quite insistently, as if it was a phenomenon that he often experienced, “Not dead.” Heathcote Williams

View all posts by Heathcote →
This entry was posted on 7 May, 2015 in homepage and tagged Cold Turkey Press, Dylan Thomas, Heathcote Williams, Jan Herman. Bookmark the permalink.