Once Around Uncle Ho 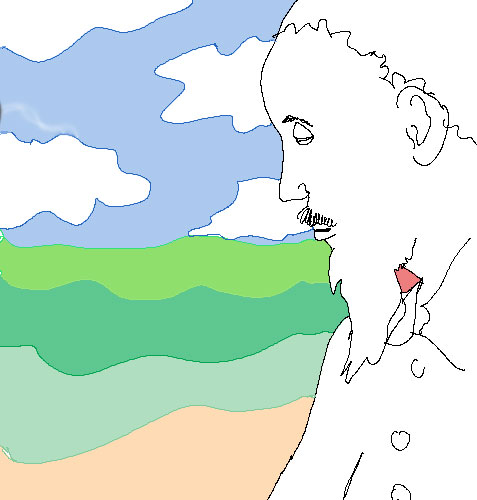 A gentle touch on her shoulder. One of the mannequin soldiers in white dress uniform, needing to move her on.   There are four of them, respectfully – lovingly – guarding their sleeping prince in his casket, one at each corner.   She’d stopped just a few steps into the two-minute shuffle that most Vietnamese waited half a lifetime to do, as the man in front of her had started to weep, silently, his body shuddering.   A much younger one – his son? – takes his hand. Moving on, her attention returns to the corpse, and the slogans of the demonstrations of her youth.

Hey hey LBJ, how many kids did you kill today

She can’t remember the rest; unsure if it was equivocally anti- war or pro-Ho, like many of them taking their first baby steps into leftist politics. Her thoughts drift back to 1975. How they’d cheered as the last American helicopters took off from the roof of their Saigon embassy like grotesque, mechanical dragonflies. There were parties; ‘We all did that. The Vietcong, the people of Europe and America. Defeating the most powerful military machine on earth.’

She stares at now at Ho Chi Minh; a foreigners’ gaze, not like the Vietnamese who seem to be absorbing him through a different set of senses; like the couple of men in front of her, the younger now with his arm around the older.   Father and son?

Eyes left, for Ho’s right profile – the high intellectual’s forehead, the white hair set back on his scalp; sharp bones over scooped out cheeks, the overbite of a top lip, and that famous long wispy beard tapering half way down his grey jacket, a satisfying last touch for the embalmer.   The hands and long fluted fingers spread over a cover that stops mid chest, like he’d been tucked up for a bedtime story; an arrangement just like Lenin’s, the only other embalmed body she’d seen. Quite unlike like her mother’s of course, laid out in her coffin in the undertakers, her pretty face couched in cream satin, permed white hair nicely flounced.   Mum was merely dead, out of the fridge for a visit, waiting for her cremation.   She’d been tiny, the same size as Lenin actually, but with pearl white skin. Lenin’s was sallow yellow. Ho is a warm pink, illuminated by soft lights on his lacquered bier, the same colour as a prostitute in a window in Amsterdam’s red light district, she thinks profanely.   But the constant in each of them was that indescribable lack of life. No actor playing dead could ever get it. Lack of life was tangible, as if the air had been sucked out of every cell.   Or was it the spirit? That which is not matter. Love. That was it, the love had evaporated, drifted off somewhere, reducing the person to compressed atoms. Love. Devotion. The invisible thing linking the cells like the thread of a string of beads, or the silence between the notes that made a chord.   She’d kissed her mother’s forehead, so cold against her warm lips; life meeting death. Did anyone kiss Ho’s?

Turning the first corner, the foreshortened view of the corpse presents itself, even though raised at an angle, to stop you seeing the bungs up his nose? she thinks, swallowing a nervous giggle.   She’d be thrown out for sure if she did. But the Vietnamese, she’d noticed, seem to have a more mature attitude towards unexpected emotions.   The look on Ho’s face is serene, eyes shut, but what if one opened? Casting a beady eye on this miniscule sample of his people? Yet the tiny parchment discs remain closed on that brain, marinated as it was in Confusionism, Buddhism, Taoism – Marxism Leninism. CBT-ML, she thinks, smiling, aware of how the Vietnamese had kept a spiritual dimension in their societies.

He’d chain-smoked, yet made it to seventy-nine. Another unbidden thought as she imagines a fag in his right hand, a spiral of smoke, a continuation of the wisps of beard; dead air, dead hair, the only things still growing.   He’d died on Independence day, nineteen sixty nine – so didn’t see the victory. They’d kept his death from the people for two days. Who were they? The advisers? The politbureau? When Mum died she’d known immediately. The hair on the back of her neck – the phone call just after she’d said goodbye in the hospital.   Wouldn’t surprise her if she’d waited for her to go – to be ‘no trouble’ in her dying as in her living. She wonders which of the Vietnamese here are saying goodbye – and who hello.

Turning the second corner now, and the men in front of her are still hand in hand.   What’s the story there?   She wonders. The older one, calmer now, looks her age, old enough to have been Vietcong – a whippet thin veteran of the tunnels, steaming jungle warfare and party education.   The Americans would have called him a ‘gook’ and tried to destroy him with flamethrowers.   Maybe the son had been disrespectful – not understanding that his nice life was down to the sacrifices of his father’s generation and the tiny man in the casket. She noticed his trainers; bright blue and orange affairs like tropical fish flashing through clear water.   His jeans were tight, his tee-shirt sporting a logo.

Just two metres to go.   Staring at Ho’s right profile, she thinks about eastern ancestor worship, and the parcels of rice cake tied in palm leaves that Vietnamese burned to honour their dead.   Uncle Ho, of course.   A last look, the top of his head, his caved in cheek – the long threads of beard. She follows the two men out of the mausoleum and into the polluted air of Hanoi, the cities’ only flaw, like the bad breath of a lover.

Now for the Mango Walk – the obligatory turn around the fishpond surrounded by mango trees that Ho used to do every sunrise, for exercise and thought. About the French? The Chinese? The Americans? His people? What he wanted for breakfast? A woman? But he was supposed to have been celibate – father only to the Revolution. She knew that every November, his body was flown to Moscow for an embalming top up with Pharaohic chemicals. Maybe they did him and Lenin together? Comrade corpse to comrade corpse. Did their DNA exchange study? Revolutionary theory? The National Question? Or how entrepreneurial practice in their respective countries had flourished.

The couple are still in front, the older man in tears again. Maybe it was another story, that the ‘gook’ was from old Siagon city. Maybe he’d kept a fine department store and had to give it up to be used as a school – after liberation; that it was his son, a new party member, who revered Ho. Or maybe…..

The older man turns to her.

‘You are curious for what we are saying – no?’

Time now for the son’s tears, as he leads his father away.

‘I’m sorry,’ she says to their disappearing backs, thinking again of her mother.

View all posts by Jan →
This entry was posted on 20 April, 2017 in homepage and tagged Jan Woolf, nick victor. Bookmark the permalink.