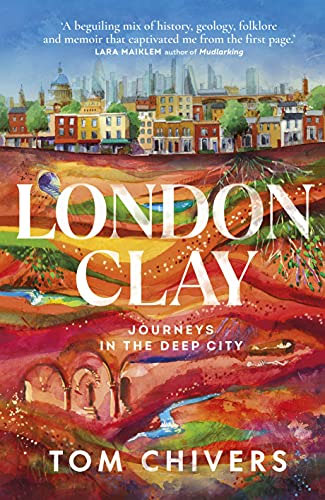 Merlin Coverley has written several books, such as London Writing, Psychogeography and Occult London which serve as useful introductions to and  brief summaries of their subjects. Unfortunately, Hauntology, which is subtitled Ghosts of Future Past, simply offers a lot of regurgitated and undigested material, which doesn’t evidence much understanding of original works on the subject by the likes of Mark Fisher which it draws heavily on. Whilst it is always good to see the books of Alan Garner, W.G. Sebald, Susan Cooper and Nigel Kneale’s TV films discussed there is little of any originality on offer here.

Tom Chivers works much harder with his research material, refining and reshaping it within a personal narrative of obsession and encounter as he explores overground and underground London in an attempt to map the city’s forgotten rivers.

Chivers’ writing has an amiable, friendly tone which draws the reader in and disguises how much varied and erudite information is contained within the pages of his books. At times the city exploration ceases and the book becomes philosophical, elegaic and highly personal; elsewhere the writing offers historical and geographical material, with autobiography sometimes also woven in. It’s a clever and interesting way off shifting focus, offering panoramic views and microscopic detail, both the near and the far, and allowing commentary on Covid lockdown and Chivers’ children’s births without the book appearing to go off topic.

I’m also very aware that this is a younger writer than me, not because of any flaws in the text but because of the cultural references and how the author situates himself in the contemporary and recent city. If I could do without football, praise for Big Brother, or mention of unpleasant right-wing singer Morrissey, in general the generation jump makes for a refreshing change in approach to that of the elder statesmen of London psychogeography (Iain Sinclair, Allen Fisher et al), and offers up a whole new set of psychical and mental locations from both the inner and outer city.

If there’s a tendency to produce a mini cliffhanger at the end of each chapter here, and a feeling that the geographical maps in the book aren’t much use as guides to anywhere, I am sure I will get over it. (I confess I resorted to Google maps at times so I could work out exactly where Chivers was walking.) I also found myself reminded of Michael Portillo’s constant reference to his Bradshaw’s Guide on TV when Chivers referred to his hand-coloured A-Z once too often!

But these are minor complaints. I have a list of new places to visit in London next time I am up there, a wealth of new information, and have enjoyed visiting the sewers, hills, edgelands, tunnels,  parks and streets old & new with Chivers as my guide. London Clay is a welcome addition to both my bookshelf and the literature of London.