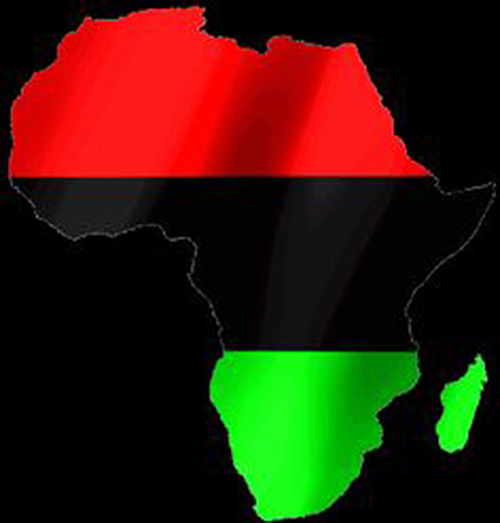 I’m a pan African but I ain’t a hotep, go step in line with pan African goals,
souls aligned by oppression the pan-african pie was split up before the pan African eye could see itself.
They sliced the panafrican  cake, before it baked, all these ingredients mixed no homogenous bits,
And bops lumped together, stolen chocolate chips to feed the greed the voids the pits of the stomach!
Filled their faces with our spirit ‘till it runs down the lips of colonialists onto the guns at their hips,
the Leopolds, the Rhodes, the Clintons,the Trumps, till all that’s left is a couple of crumbs.
yum yum yum yum.
But they don’t know that crumbs are actually seeds,
sesames,
and seeds grow into trees,
And tree blossom.
Their deforestation and their change of the weather can’t weather our souls,
They tether our fros, with their chemicals where they once tethered our throats with their chains,
Their belief systems tether our brains on the continent.
What is a continent?
Belief systems tether our brains on  the continent?
Europe is a cultural creation, separated by the other, peninsula of the Asian continent we know,
Nothing geographical to separate, not large outside mercator, no different to the subcontinent of India though.
Africa is a geographical entity, meant to be huge, mostly water of each side with two thousand languages, more lingustic diversity than 30 Europe’s,
talk of culture the convention is a sham, forget your geography man, look at the facts.
European is synonymous with whiteness,
European unity is.. well you get the idea, When you peer under rocks you might gain under rocks you may find your rocks isn’t a continent,
It’s just part of a larger rock,
a larger plan,
suppress, reduce, exploit, demand.
I’m a pan African African but I ain’t a hotep  reducing Africa to dashikis, and sun. Ethnocentric to the left of the suez canal and great bitterness to the oppressed on its right side.
Are you on the right side of history, not how will judge you.. They see their killers as saints,
Are you on the right side of truth in the now, cos if not the you’re  complicit in pain.
What is an African? let’s do the maths again, are African Americans Africans after they were captured and massa made ’em worthless there masters were European on American earth is that an African?
The mestizo is both but he’s black,
again the line is blurred it’s worth questioning all the facts again,
do I choose my identity like putting on a mask,
and then is choice even an element?
when and what if I am black but I’m Australian?
It’s messy. Read, separate the fact and that is how you unify to deny the divide and rule,
Question school! history is written by the victors, so is geography.
Hypocrisy is rife in life as is ignorance,
In the age where the skies hold our secret our bias keeps us chained to the ground,
Confirmation.
Geographic factors of latitude lead to ideas and food traveling the breadth of Eurasia, the rhino’s head spread over the temporal zones and thus crops that travelled were dead on arrival, and yet the survival continues.
And survival continues today in the blood and the sinews and the hearts and the minds of the dinka the Twas and the Tivs and Saharans, Jamaicans and Haitians and those in the states  and the British Nigerians and Shebros, the fate of the African,
Belongs.
To.
The.
African.

Tweet
more
This entry was posted on 29 September, 2016 in homepage and tagged Femi Nylander. Bookmark the permalink.