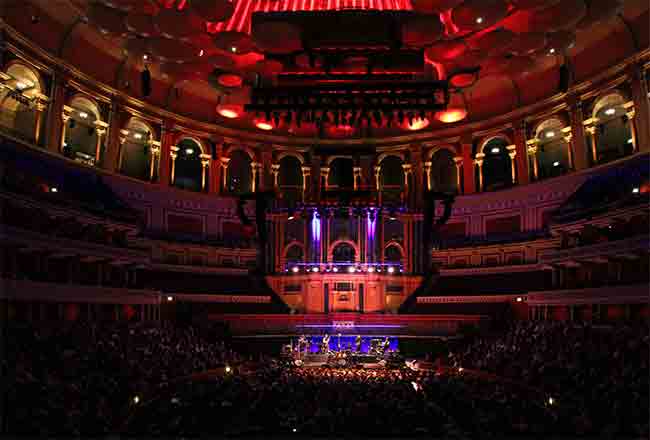 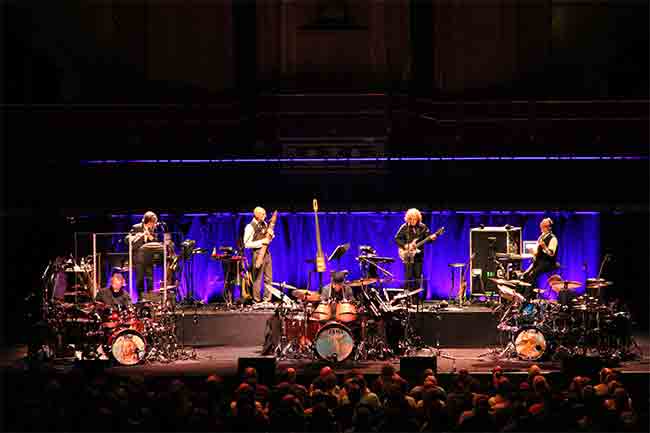 King Crimson are an English progressive rock band formed in London in 1968. King Crimson have been influential both on the early 1970s progressive rock movement and numerous contemporary artists. The band has undergone numerous formations throughout its history, in the course of which 22 musicians have been members; Robert Fripp is the only consistent member of the group and is considered the band’s leader and driving force.
– Wikipedia

It’s my own ideas that I am struggling with, actually, which is why I have resorted to Oblique Strategies as a way out of my predicament. See, I was looking forward to this gig. I’ve only seen King Crimson twice before, as a quartet way back when, and at Shepherd’s Bush in 1998, although I did see Robert Fripp do solo Frippertronics at the Virgin Megastore, play with David Sylvian, guest with Peter Gabriel, and speak at the launch of one of the first King Crimson live reissues. So this 50th birthday bash was going to be good. But it wasn’t, and I’m feeling as though I’m looking a gift horse in the mouth for my free review ticket, and will no doubt be regarded as uninformed by said Fripp, who has little time for reviewers at the best of times and will perhaps suggest I was not listening correctly. But I did my best, I really did.

I’m going to be a smartarse, and suggest that the most embarrassing details, namely the plethora of drummers, was amplified anyway. Otherwise, where to begin? This was one of the worst sounding concerts I have ever attended. The band sat in the distance with little lighting, no screens, and little stage presence, and the sound was muddy and quiet. I wanted to report back how the drummers had won me over with their clever and considered interplay of percussion and drums, but it was cluttered and unnecessary, and just reinforced my general dislike of drummers. It reminded me mostly of the awful double-drummer moments in late 1970s Genesis concerts, when Phil Collins and either Bill Bruford of Chester Thompson would, for no reason beyond showmanship, bash a few bars out together – but thankfully they were short, if not so sweet. Tonight there were always drummers fiddling about, filling up the spaces, leaving little room for guitars or bass.

I stayed for the second half although I really didn’t want to. I’m glad I did, because the band briefly came alive halfway through, with some nifty guitar and bass work. In fact both Fripp and Tony Levin did a solo. Then the aural soup and my disinterest returned. I sat still and breathed deep, trying to listen, trying to connect.

This isn’t the King Crimson I wanted to see, I accept that. The trio who made Red are long gone, as are the quartet of Discipline and whoever it was made Projekt X. Neither Jamie Muir or Bill Bruford are going to return, and I am fine with that. But when a progrock flute made itself known during ‘Frame by Frame’ early on in the evening I realised this wasn’t a band I wanted to hear. To confuse and clutter one of King Crimson’s tautest and most clearly defined songs is a bizarre decision, one compounded later on when Adrian Belew’s spoken parts in ‘Indiscipline’ were sung. I’ve never been a fan of Belew’s vocals, but this was just ridiculous, as were Mel Collin’s wind instrument interventions. Mind you, the drum and percussion interplay at the start of this track was one of the few moments when the drummers seemed to be having fun and it sounded good. But, again, the track sounded retroactively refitted for In the Court of the Crimson King as epic progrock sludge. But then there was far too much early progrock-sounding Crimson generally for my taste, even if they were actually songs from later albums. I can disconnect and step away, but I confess I was and still am disappointed.

Very apt, for a band with a frontline of three drummers (although one of them sometimes plays keyboards). New arrangements and new medleys, or segues between tunes, are interesting and – I’m sure – necessary for a band now revisiting their vast repertoire. But, when a progrock flute made itself known during ‘Frame by Frame’ early on in the evening (‘I repeat myself when under stress’) I realised that what was in many ways a freedom, a band of 7 musicians able to reinterpret the music of 50 years, actually seemed like a constraint, since they all have to be given something to do, most of the time. I noted, however, that Gavin Harrison showed admirable restraint in several places and contributed, as did Bruford in days gone by, by remaining silent until he was required.

Okay. Lots of fans around me enjoyed the concert, including the friend I attended with, and another friend who was sitting elsewhere. There were cheers of recognition for many songs, but I found the whole thing strangely muted and unengaging, as did lots of the audience nearby, several of whom left during the concert. They should be less critical. I note that there were swathes of empty seats in the upper balconies of the Albert Hall too.

Well, that’s over then. I am so disappointed. What was that about? But it’s only a concert, only a band, a rock group. In the grand scheme of things it doesn’t matter, it was just a night out. There is other music, there will be other concerts. And King Crimson will no doubt continue reinventing itself in the studio and live, and I will probably like a lot of it. Just not right now.

View all posts by Rupert →
This entry was posted on 22 June, 2019 in homepage and tagged 18 June 2019, King Crimson, Royal Albert Hall, Rupert Loydell. Bookmark the permalink.