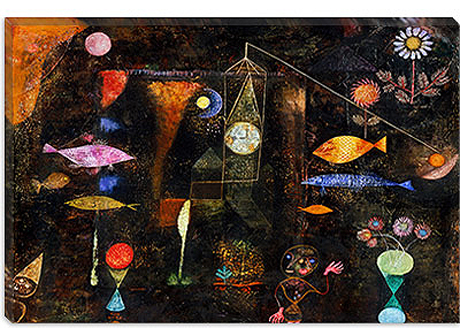 Paul Klee was one of those spirits who transmuted everything he came in contact with—effortlessly. It was in his bones, his blood, his heart, his mind, his psyche: the act of transformation.

The poet e.e. cummings once wrote, “There’s a hell of a good universe next door, let’s go.” Klee went, every day of his life. And he was not committed to one particular alternative. He invented them by the truckload. This, as opposed to organized religions, each of which invents ONE cosmic mural and tries to back people into a corner with it.

Klee never focused on developing a trademark style. He saw One Style as a limiter, a defection from the real joy of painting. He was a man who had many desires, recognized that fact, and painted all of them.

He exudes the sense of: “Give me a small room, a pad of paper, a few colors and brushes, and close the door behind you.”

Almost everything he did was by way of improvisation.

Critics downplay this last fact, because for them it amounts to cheating: spontaneity is only permitted when there are many signs and stories of struggle. Klee avoided becoming enmeshed in struggle by working on a number of paintings at once. When he was finished for the moment with one, he moved to another, and so on, and kept revisiting the incomplete works and adding to them until he was satisfied.

Klee was what I would call a sane man. He knew how to begin, he knew how to end. He knew that the next painting was more important than the last. He didn’t need self-pity, and he didn’t care for outlandish praise.

He wasn’t trying to be recognized for certain traits. He had found gold, and he kept mining it. He realized that imagination is an infinitely forked river, and he needed no propulsive agenda to drive him forward. One, two, three strokes on a blank canvas and he was able to invent what could come next. Could was never should or must. It was all open, his spaces.

He was not trying to solve a problem. Nor, as some have said, was he asking questions in his paintings.

Each small painting was a world unto itself.

He never titled a painting until it was finished. Then he looked at it and thought up a name, which was sometimes laid on as a description, and sometimes given as a statement about what the picture was not.

Even Picasso, who reserved most praise for his own fabulous self as a matter of principle, once visited Klee in his studio and acknowledged the brilliance of another man. Through clenched teeth, no doubt.

For Klee, the blank canvas signaled the delicious unknown. He was very comfortably nowhere at that moment, and then as he painted, he was in a successive series of somewheres.

Kandinsky and Klee mark a point of demarcation for painting. It was not enough to alter the so-called real world. You could actually create a new world in every picture. A different new world. There were as many as you wanted to dream up.

Klee did not give credence to having a finished idea in his mind before starting a work. He was not transferring a picture in his mind to the canvas. He was inventing/discovering as he went along. In this, he was happy.

He could be very precise, and he could be imprecise. A world does not have to be precise.

Some say his work was too easy. It was too celebrative. It didn’t present some final vision. It lacked maturity. The emotions were too simple.

All these judgments are off the mark. They represent estimates of what Klee was not. What he was, was marvelously direct. Is Mars too red? Is Mercury too hot?

Do androids dream, as Phil Dick asked, of electric sheep? Do ants dream of balloons? Why not? And if so, why not paint that? 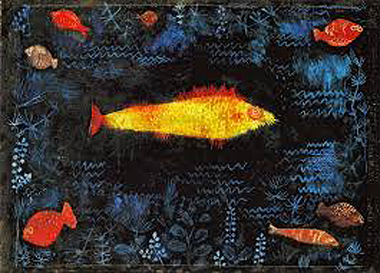 I believe Klee was saying this: Here are several thousand worlds I just invented. Approach them with a free mind and heart. Glance at them from several different angles. Jump into their liquids, stand on their flat surfaces, lean from their precarious platforms. Serve them to yourself as appetizers or main courses. Let them pass through your digestive tract. Make faces to match their faces. Remove their masks; then you may find deeper shades or you may find nothing. Ponder how you invest your imagination in mine, and go away with a spark of self-recognition, recognition of what you have, what you can do, what you can invent. Our whole planet is a mask, and we can, if we change and evolve, take great delight in dreaming up new spaces and times.

Jon has run the online blog NoMoreFakeNews.com since 2000 to the present day.