Feeding Tube Records offered some swag at its exhibition of Claude Pélieu’s Bosch-derived collages. “We made buttons as giveaways,” Byron Coley says, “and we featured a urine-colored cocktail called Norman Mailer’s Pocket.” You can be sure that Pélieu is somewhere in Bosch heaven enjoying the joke. The little yellow buttons said, “je pisse dans la poche de norman mailer.” Because that is exactly what he did.

When I first heard the piss-pocket story a long time ago, I nearly fell off my chair laughing. The tale went like this: Pélieu was standing in line behind Mailer at a booze-filled party. Both of them were tanked. They were waiting to take a piss. But the wait was so long that Claude got fed up. He simply unzipped his pants and relieved himself in Mailer’s jacket pocket without Mailer knowing. 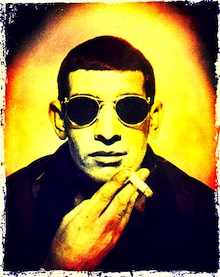 Now Claude and I had collaborated on a little magazine once upon a time in San Francisco and spent many drunken evenings together, so I knew he was entirely capable of what the story described — especially if he was drunk. But it’s also the kind of tale he would have been happy to flog just for the hell of it. And there are several variations to the tale, which made it suspect.For example, his obit in Libération, the French magazine, set the story at Andy Warhol’s Factory and quoted him directly:

But on page 363 of Jubilee Hitchhiker: The Life and Times of Richard Brautigan the story is set at the Dakota: “Claude worked in collage, wrote poetry, and translated the Beat writers into French. He gained a measure of notoriety in New York after he pissed in Norman Mailer’s pocket at a party in the Dakota.” Laki Vazakas cited Miles telling “the story of when Claude took a piss in Norman Mailer’s pocket at Panna Grady’s party.” And Gary Cummiskey elaborated: “An often-repeated story about Pélieu’s antics concerns his drunkenly pissing in Norman Mailer’s pocket at a party, and thereafter Mailer made a point of putting his hands in his pockets whenever he saw Pélieu approaching.” (Nice tail to the tale, but frankly, I think Mailer would more likely have pasted Claude with a headbutt if he ever saw him again.)

So I asked Pamela Beach Plymell to straighten me out. She’s in charge of Claude’s estate (because Claude left it to his wife Mary Beach, her late mother). Pam is excellent at keeping track of things. She was also at the party. The story is true, she tells me, but the details are even funnier. “Mailer and Claude were standing in front of a door in Panna Grady’s apartment at the Dakota waiting for whoever was inside to come out,” Pam says. “Both were very drunk. Finally Claude pissed in Mailer’s pocket.” The wait was so long because — try topping this — “they were standing in front of a broom closet.”

For a look at some of Pélieu’s collages from a previous exhibition, get a load of this eyeful: The Claude and Mary Show.