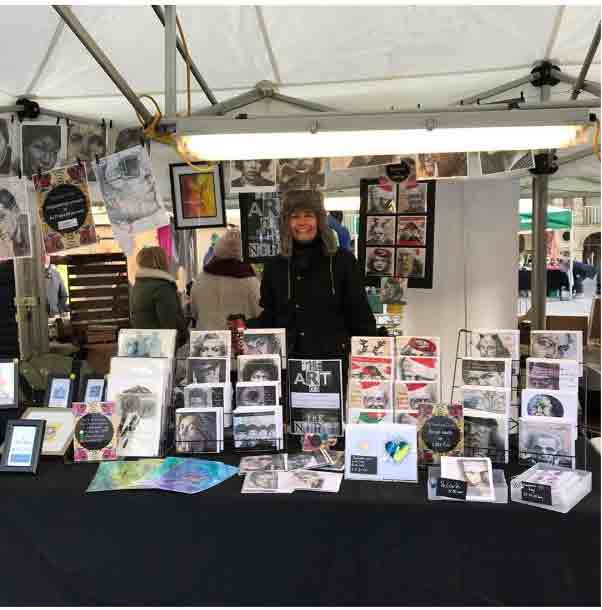 Alan: So, Pip, tell me about how you got into drawing, illustrations, art generally?

Pip: I have always been creative since being a kid. Surrounded by art and craft stuff growing up as my mum had her own business and was always making, painting or drawing. I went to art college although I realised at the time that I wanted to work in fashion buying rather than physically making things. I guess for the time I lived in London I didn’t do much drawing. My creativity went into decorating and ‘upcycling’ (not fashionable then) on a budget. It wasn’t until I had a complete change of career into education that I began to revisit all aspects of art again. As an art teacher you are looking at so many different artists, art movements and techniques that I became very adaptable in style and medium. The downside of that is I lost a sense of what I actually enjoy doing and what ‘my’ own style is.

Alan: I believe you’ve had different lives in Yorkshire, the Calder Valley, and in London… 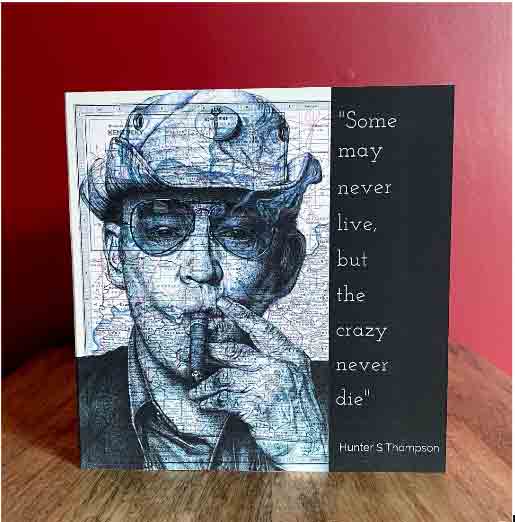 Pip: Yes, I was born in Todmorden in the West Yorkshire side, so definitely see myself as a Yorkshire lass! I moved to London after studying textiles at Loughborough University (then college of art). For 8 years it was great. The buzz and vibrancy of city life, the partying and I built myself a career as a clothing buyer. Alas, like most incomers, living in London reached its expiry date. It seemed a natural time when I was pregnant to move back to the ‘North’. Not quite ready for the total country life we moved just outside Manchester for a few years – my son sees himself as a ‘Manc’! My husband tragically and suddenly died when my son was 2 years old which is how I found myself full circle back to the Calder Valley to be nearer to family and to the hills. I’ve been back here for 15 years now, happily remarried, my son is now a giant 6ft 4ins, and I gained a stepdaughter.

Alan: To create the illustrations of musicians and creators, I sense that your best work is when you like or respect them. Is that correct? Do you find that they in some way inspire you?

Pip: My first pen drawing over a map was Hunter S Thompson. My husband introduced me to his work when he read me ‘Fear and Loathing in Las Vegas’. I cried with laughter and then I did more research on him and read some of his other books. I love his irreverent nature. A few friends asked if they could have copies of the portrait which sparked the thought that it could be a business idea. I have tried to stick to drawing people I like, or respect, and not just going for popular/current artists. Some of my cards have been made from commissions, so not necessarily people I would hold up as personally influential, or admired, although they may have talent in their field.

Alan: You’ve needed to research birthplaces for those you’ve been drawing. Any surprises?

Pip: I love this part of the process and then sourcing a map to draw over. The UK people I have drawn I generally know which towns or cities they are from but there have been a number of surprises with musicians from the US. What has been more of a surprise is actually listening to the music and reading the lyrics of some of the people you have commissioned from me Alan whose music I had previously not really listened to – Neil Young, Captain Beefheart, Janis Joplin. 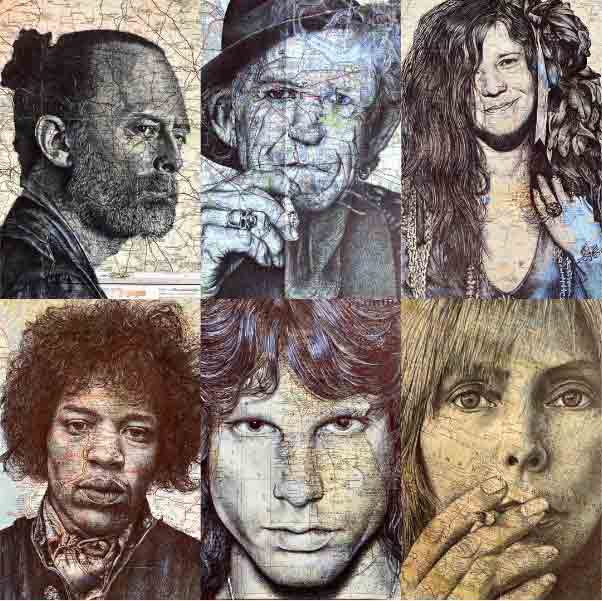 Alan: Who are some of the musicians and artists who you think are really unique?
Pip: For me, Prince springs to mind. I started listening to his music about 1984 and was slightly obsessed with him during the 1980s. I never got to see him live in his heyday, but saw him at the O2 London 2007, where he was a speck on the stage and then at the MEN Manchester 2014, just 2 years before he died and he was incredible. He could play numerous instruments, including a mean guitar. Wrote, performed, produced, danced, acted(??) and for a small guy with funny clothes and heels was pretty darn sexy! As you can tell, I like Prince. On a more general note I like characters, people who are themselves. Whether they are musicians, writers, actors, sportsmen/women or politicians. Everything is so polished, produced and managed nowadays. People are afraid to say anything as everyone is offended by everything. It’s stifling creativity, open discourse and fun.

Alan: You’ve also been searching for ‘words’, quotes from musicians to add into cards that you’ve produced alongside your original artwork. Which ones are especially powerful and memorable? 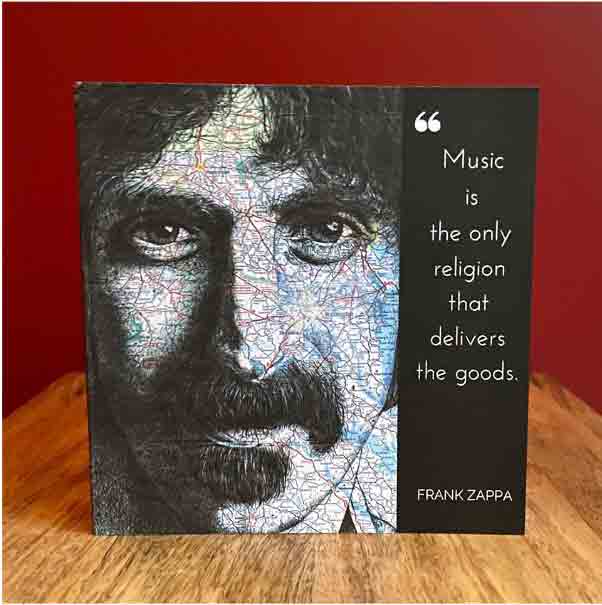 Pip: I try to find quotes or lyrics to go on greeting cards that I like, and that other people can connect to whether it be through humour, a positive, uplifting or romantic sentiment. A few of my favourites: ‘The best is yet to come’, Frank Sinatra (because my husband always says that to me); ‘Buy the ticket, take the ride’, Hunter Thompson (all HST quotes are brilliant); ‘You are the only thing, in every room you’re ever in’, Elbow (what a beautiful sentiment), and, ‘There is a crack in everything, that’s how the light gets in’, Leonard Cohen (a wordsmith). 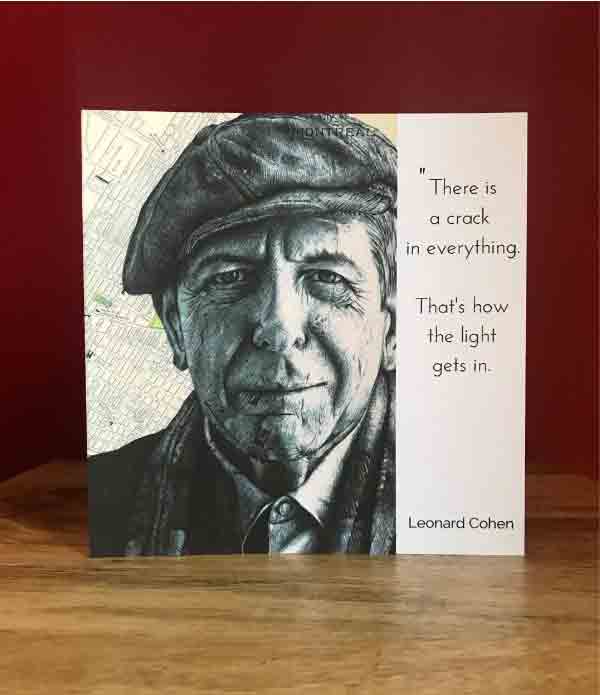 Alan: In addition to music, I think you really like films…tell me a bit more about both as creative sources…

Pip: I love films! During isolation time I have been revisiting some old black and white movies that I used to watch with my mum when I was a kid. The nostalgia of a bygone era, when movie stars were stars – they seemed to have more gravitas, probably because they couldn’t post themselves all over social media every day. There are more I would like to draw; Cary Grant, Katharine Hepburn, Bette Davis, James Stewart … I could go on. I watch all genres and eras of films though – there is a lot of dross out there but I’m always hoping for a gem that I can get lost in, inspired by or shocked by. I remember watching ‘Pulp Fiction’ at the late-night screening at Greenwich cinema in 1994 and being blown away by it. The style of it, script, actors and soundtrack. I think it may be the only film I have gone and watched again the following night. 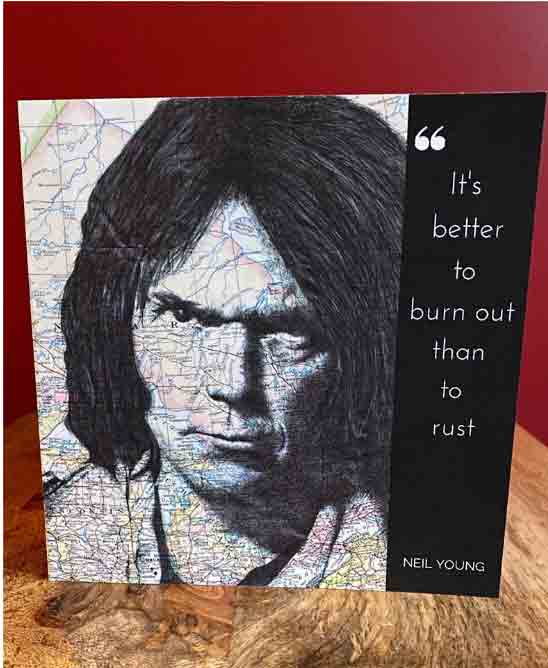 Alan: I know you’ve recently given up your job as an art teacher in a sixth form college. Why was that?

Pip: To be honest with you Alan, I had lost faith in the education system. I believe it needs a total overhaul across all subjects and in the way we assess students. The rise of the academy schools has turned them in to business models. Whilst they may on league tables appear to be improving grades the creative and critical thinking skills of young people is diminishing. I think this is also a cultural shift as well, with the instantaneous gratification of having everything at your fingertips with smart phones/ tablets etc. Coupled with that, the arts are continually being marginalised in schools. Some schools are not teaching music, drama or dance anymore. Students only having art lessons on a rotation basis every term. This impacts on the number of students selecting creative subjects at higher levels and before we know it, we have a dearth of new talent. Sir Ken Robinson is brilliant in his talks on education.

Alan: What do you hope for now in your artistic life? Any really strong inspirational passions?

Pip: Just being able to make a living from something I love doing would be amazing.

Alan: From previously talking together, I know that you are keen runner. How does that fit in with the rest of your life?

Pip: It would probably be more accurate to say I was a keen runner. A friend said back in 1998 that there is no way I could run a marathon. I started from zero running to completing the London marathon in 2000 and carried on after that until the past few years. I love how running is good for the mind as well as the body and intend to build it back into my new working from home daily routine.

Alan: What do you most enjoy illustrating? Are you actively seeking commissions?

Pip: Yes, I am always looking for commissions. All I need is good quality photograph to work from and I generally work in A4 size, although I can go as big as A3. Older faces are more interesting to draw as they have character and lines of a life lived. This also works well with pen and the contrast of light and dark. I like to mix things up and occasionally do landmarks or buildings. I have been commissioned to draw a couple of cats, but I wouldn’t say I would want to be a pet portrait artist full time!

Alan: I’ve mostly seen what I think of as your ‘pen-and-ink works’. What other mediums and styles do you employ?

Pip: As I have been building my business over the past couple of years alongside teaching, I have focused on the pen drawings. Now I am working as a full-time artist I am hoping to branch out into some mixed media work. I would like to explore oil paints more as I have dabbled for teaching purposes and like that you can achieve texture and intensity of colour, but the drying time and messiness of cleaning brushes irks me somewhat!

Alan: I read on-line in your blog that you’d, “…like to go on ‘Strictly Come Dancing’ and in my mind I am amazing!”

Pip: Ha ha, yes I used to watch the original ‘Come Dancing’ when I was younger with my mum and was always creating dance routines at home to pop music in the 80s. When ‘Strictly Come Dancing’ started back in the early 2000s I was hooked. My dances of choice would be the Argentinian Tango and Pasodoble for drama and the Charleston because I love the style of the 1920s. The reality is I have flat feet and stiff hips… but I can dream!

Alan: Many thanks for your time and thoughts, Pip. Anything you’d like to add?

Pip: Thanks Alan. I think just to say in the strange times we find ourselves in, I hope that post COVID-19, that positive things come out of it. People continuing to engage with and support their local communities. Having an appreciation of the simpler things in life. Slowing down and enjoying life. 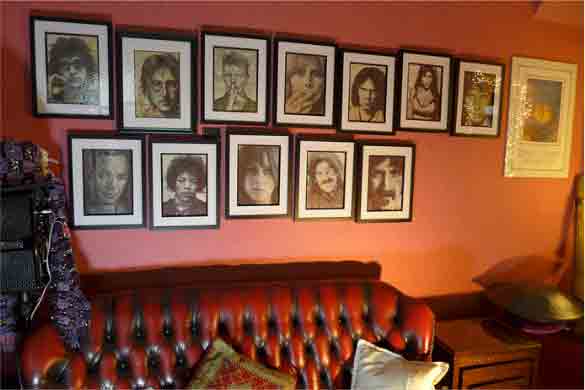 Some of the drawings Pip has completed for Alan

Tweet
This entry was posted on 18 April, 2020 in homepage and tagged Alan Dearling. Bookmark the permalink.