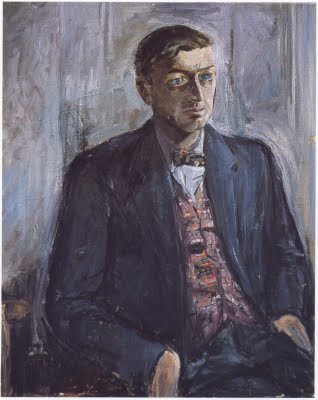 A Bouquet for the Diamond Jubilee:

At the very moment at which we are composing these lines in London, the whole of England – orchestrated by the capitalist press – is preparing for a hysterical frenzy of the most futile and dispiriting kind: the Diamond Jubilee. May one not discern in this fact a manifestation of historic justice? Just when the country is enjoined by its government to a travesty of rejoicing in the names of patriotism and imperialism, despair is the principal reaction of the poets.

Do these lines sound familiar, apposite? They could have been penned last week. In fact, they were written seventy-seven years ago by an English poet of eighteen. All we have done is to change “Silver” to “Diamond”. One might have gone the extra inch or centimetre and traded “imperialism” in for “globalism”. In any case, the mood is familiar and so, we might add, are the circumstances.

“The First English Manifesto”, from which these mordant lines are taken, was the brainchild of David Gascoyne (1916-2001), avatar of the yet-to-be born English Surrealist Movement, poet of precocity, art critic and Francophile, and astute observer of the passing scene, of what his admired Rimbaud had once called “cette parade sauvage”. It was written in a hurry, in fluent, tumbling, though exact, French. The month of its composition was May 1935, as the whole of Great Britain limbered up to celebrate a quarter century on the imperial throne of George V of the House of Windsor (born Saxe-Coburg-Gotha), who, having presided for four years over mass slaughter on the Western Front followed by victory over his German cousins, was currently squatting quite comfortable on top of mass unemployment, widespread poverty and incipient social strife. In the Palace of Westminster, an enfeebled Coalition Government was ineptly steered towards bankruptcy by the Lord President of the Council, the Harrovian Stanley Baldwin, who took over as Prime Minister during the Jubilee month, dispensing complacency amid clouds of pipe smoke. A fit of public rejoicing at the feet of the well-fed monarch, it was realistically felt, offered distraction from these woes and embarrassments.

The reaction to this proposal of this young poet was to dream up a statement and a movement that would reach down to depths of sub-consciousness the powers that be could never reach, still less control. As Gascoyne was later to write in his analytic and far-seeing A Short Survey of Surrealism, only by such drastic means would l’homme moyen sensuel be released from “chains of second-hand and second-rate ideas.” That the Manifesto should have been compiled in French in a semi-detached house in suburban Teddington by the son of a bank clerk is just one of the multiple ironies in which the cultural landscape of that fraught period abounded. Few heeded the call at the time, though the International Surrealist Exhibition mounted the following year in the New Burlington Galleries in London was to be an indirect consequence. Few, moreover, are now aware of the existence of this timely broadside – unsurprisingly, since its author immediately left for Paris, where he published his witty and incisive text in the trenchant, though to his fellow countrymen invisible, pages of Les Cahiers des Arts, the most forward looking arts magazine of its day, edited by the Greek-born Christian Zervos, champion of Picasso. It resurfaced in 2009 during the preparation of Gascoyne’s biography. As we dust off the bunting and wearily gird ourselves for another orgy of celebration, I translate it here as a reminder or wake-up call, a distraction from distraction. Plus ça change, plus c’est la même chose.

Surrealist groups exist today throughout Europe, inAmerica, in the Canary Islands and in Japan. Only England– one of the last remaining non-Fascist countries – lacks one. It seems to us that the moment has come to fill this gap.

Let us at the outset declare our resolve never to yield blindly to what is commonly known as “the Great English tradition”. Surrealism is no exotic import that this tradition is free to accept or to reject. Neither is it a literary school. It is an international system of ideas determined by conditions peculiar to our age. And, so far as the tradition is concerned, it is there in Swift; Edward Yonge; Mark Lewis; William Blake; Lewis Carroll, whom we acknowledge as precursors, apart from whom we salute all of those living writers who have given proof of their devotion to the revolutionary cause. We affirm nonetheless our autonomy from all foreign critical “standards”; our intention is resolutely to pursue our road undaunted by onslaughts we may attract either from individual writers or from members of the international society of authors.

At the very moment at which we are composing these lines inLondon (May 1935), the whole of England– orchestrated by the capitalist press – is preparing for an hysterical frenzy of the most futile and dispiriting kind: the Silver Jubilee. May one not discern in this fact a manifestation of historic justice? Just when the country is enjoined by its government to a travesty of rejoicing in the names of patriotism and imperialism, despair is the principal reaction of the poets.

Surrealism is the Dialectical Solution to the Problems of the Poet

While allocating a pre-eminent place to the class struggle, Surrealism is by its very nature antithetical to the Leftish attitude according to which proletarian literature and propagandist art are the sole permissible revolutionary means of expression. Qualified poets are not confronted with a stark choice between two directions: on the one hand the pursuit of a simplified art, populist and proletarian and possessing no purpose beyond the efficacy of its propaganda or, on the other hand, depoliticised art, subjective in the extreme, aspiring to nothing save the personal self-expression of the writer. Surrealism indicates a third way, the only authentic one, leading victoriously out of the twin traps on which the first two approaches are impaled. We, the surrealists, believe in a future in which the Revolution will reveal to mankind the real, the surreal, extent of his faculties for life, love and thought, where the chains that shackle us are broken forever.

Poetry must not be confused with propaganda. It is the act by means of which mankind comes to the fullest awareness of himself.

The Aims and Methods of Surrealism

The fundamental ambition of surrealism is to dismantle all formal distinctions between dream and reality, and subjectivity and objectivity, so that, out of the detritus of these worn-out antimonies, the future conditions for which all revolutionaries strive may emerge into daylight.

The means employed by Surrealism to reach this goal are, above all, automatic writing and experiences characteristic of automatic creation. Surrealism is an instrument through which a voice both universal and pure speaks. Surrealist texts concern themselves only with thoughts in their nascent state, not intercepted by reason or logic. Important theories on Surrealist techniques have been developed over the last decade.

“To compare two objects as unlike one another as possible or, by another technique, to bring both within the range of a sharp and striking effect, remains the highest task towards which poetry can aspire. To this its unrivalled and unique power increasingly tends: to reveal the concrete unity of two terms placed in contact and communication with one another, so as to lend them a power which each lacks when viewed in isolation. What must be severed above all is any formal opposition between these two terms; what is clear is that their seeming incompatibility stems from an imperfect or immature sense of their nature derived from the externals of time and space. The more blatant their apparent incompatibility appears, the greater the need to suppress and annihilate it. Everything conspires to dignify the thing that is in play. Thus two objects, when rubbed together, achieve in the flash of a spark the supreme unity of fire; iron and water reach a complete and estimable resolution in blood, etc.. Excessive particularity should constitute no stumbling block to this way of seeing and feeling: hence architectural ornament and butter marry sublimely in the Tibetan torma.” [André Breton].

The Pronouncements of Surrealism