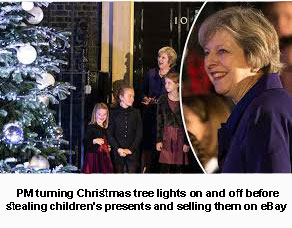 In her unifying Christmas message to the British public PM Theresa May has implored the country ‘Christmas means Christmas.’ Unfortunately, due to her using similar phraseology to describe the current Brexit shambles, her well-meaning yuletide sentiments have led to mass Xmas confusion with no one in the entire country knowing whether they should still ware paper hats during the Christmas meal or if Brussels are definitely off the menu.

Joe Trowser Turnupps (37) from Tunbridge Wells added to the confusion asking, ‘Is that why is doesn’t snow anymore? Because the government have said ‘Christmas means Christmas? That would explain a lot.’

Noddy Holder was strangely silent after the PM’s message was aired on Christmas Eve and it is thought that he is waiting for ‘final clarification’ before performing his traditional bellowing. A man pretending to be Santa Claus near Cirencester got stuck halfway down a chimney when he heard the speech on the TV in the living room as he approached and now no longer knows whether to carry on or stay where he is until March, or June, or sometime later or when he gets the all clear from the PM. Heeding her own confusing advice, shortly after making the speech the PM invited some children to No.10 Downing Street where she randomly turned the Christmas tree lights on and off before stealing the their presents and selling them on eBay. 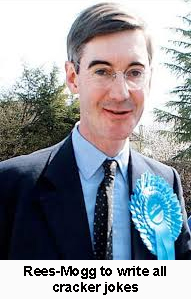 Basil Fortissimo Blithe, heading the governmental committee overseeing communications knowledge utilities & performance (C.O.C.K.U.P) commented, ‘The PM’s remarks are as clear as polished sleet. What she obviously means is that, in the current climate of austerity, the UK public should expect an altogether new type of yuletide experience. For example; Christmas will no longer last twelve days but twelve hours and run from 3.15 am on Christmas day, when the children get up to open their presents until 3.15 pm at the end of the Queen’s speech whereupon everyone will, once again, start looking for deals in the January sales and cheap holidays on their smart phones. Also there will be no trains whatsoever, all cracker jokes will be written by the Hon Jacob William Rees/Mogg and you will have to spend half your time until New Year’s Eve queuing at the post office to send something back to Amazon that doesn’t fit and the other half discovering that most of your favourite childhood celebrities have died from overdoses brought about by festive depression. Merry austerity Christmas to you all and have a crappy new year.’

Mashup artist Cassetteboy presents his take on one of the biggest news stories of the year, shining a humorous light on Brexit.

View all posts by Ethan →
This entry was posted on 29 December, 2016 in homepage and tagged current affairs, Ethan Harrison, politics, satire. Bookmark the permalink.