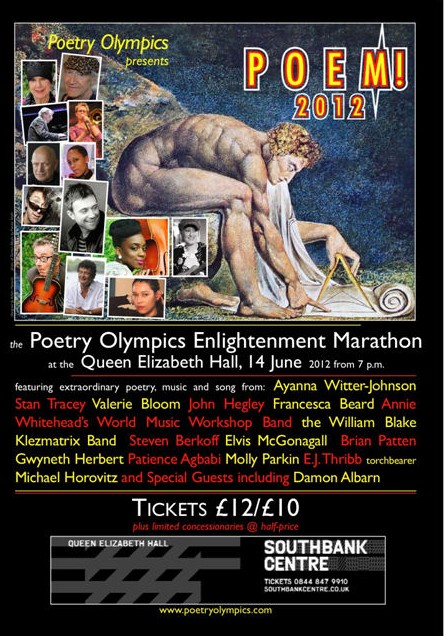 BRITISH beat poet and jazz troubadour Michael Horovitz brings a cornucopia of the Counterculture to the Southbank’s Festival of the World this June with his Countercultural Olympiad: P O E M! 2012 – the Poetry Olympics Enlightenment Marathon festival.

Since 1959, Horovitz has brought together poets, artists, musicians, playwrights and performers from all walks of life, working towards a vision of a United Arts of Britain. From the 1965 sell-out Wholly Communion International Poetry Incarnation at the Albert Hall, which still holds the record for the biggest audience for a single poetry event in Europe and kick-started the UK countercultural revolution, to Children of Albion, the Penguin anthology of Poetry of the Underground he edited in 1969, to the 1980 Westminster Abbey Poetry Olympics and beyond, Horovitz has promoted some of the best and brightest in Britain and the world.

Why a Countercultural Olympiad? Poetry Olympics was founded in 1980 in a very public response to Margaret Thatcher’s attempt to prohibit athletes from competing in the Moscow Olympics. Horovitz invited an international selection of poets, including Americans and Russians, to perform at Westminster Abbey in protest at the West’s uncivil Cold War political posturing.

Horovitz has been staging a multifarious array of activities ever since, both cultural and Olympian, grown from the grass roots up. He has always delighted in celebrating excellence and multiculturalism; P O E M! 2012’s Countercultural Olympiad is no exception.