…After Offering Guilty Plea For US Paedo Crimes 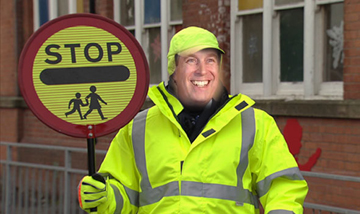 Prince Andrew has been sentenced to ten months community service as a lollipop man at an American girls’ school after offering a guilty plea for committing under-age sex crimes in the US. The judge in the case, Sir Henry Seedymoore Digby James, UK expat, dual-nationality, old Etonian and friend of the Queen, her staff and family, Prince Andrew himself and other leading establishment figures in the US and UK, made the offer to the sex-obsessed royal who is fourth in line to the throne while visiting a lap dancing club with him over the weekend.

Judge Seedymoore Digby James told reporters, ‘Andrew’s demanding role as lollipop man at the Young Wayward Girls School in Farmville, Virginia, will give him the chance to build trust between himself and the public and also several of the pupils. Everyone should understand that, far from being lenient, this is a harsh sentence, as the gruelling job includes two one hour shifts per day where the Prince would be kept more than busy giving the young girls a helpful pat on the bottom across the road while holding his all important lollipop for them, before filling his I phone with their numbers so he can mentor them on a more personal level at a later date.’

Advisers close to Prince Andrew have hinted that the royal figure has asked what would be required for the sentence to be increased to twelve months in order for him to ‘build bridges with the local Farmville community’ where the school is located and, of course, for him to protect the pupils from the very real dangers they face on the streets.

View all posts by Ethan →
This entry was posted on 8 January, 2015 in homepage and tagged Ethan Harrison, humour, satire, spoof news. Bookmark the permalink.