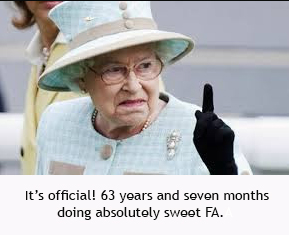 Royal commentators were quick to point out that its not been easy for our monarch to achieve this latest accolade and that it has only come after over half a century of 24/7 round the clock skiving. Brigadier Sir Brian Eton Churchill Cambridge said, ‘Remember the Queen hasn’t done anything since she was twenty three: Dusted, washed up, cleaned her shoes, ironed, changed a fuse, been shopping, filled the car up with petrol, picked the kids up, fed the dog, cooked a meal, mowed the lawn, picked her nose, wiped her own arse or even sifted through the junk in the loft. Nothing. People don’t realise just how much indolence it’s taken on her part to become this undisputed symbol of our country’s aristocratic inertia.’

Media outlets around the world are predicting the Queen has still got a few more year in her yet and that she will be around for sometime but always where there’s bugger all to do..

View all posts by Ethan →
This entry was posted on 10 September, 2015 in homepage and tagged current affairs, Ethan Harrison, Political comment, satire. Bookmark the permalink.