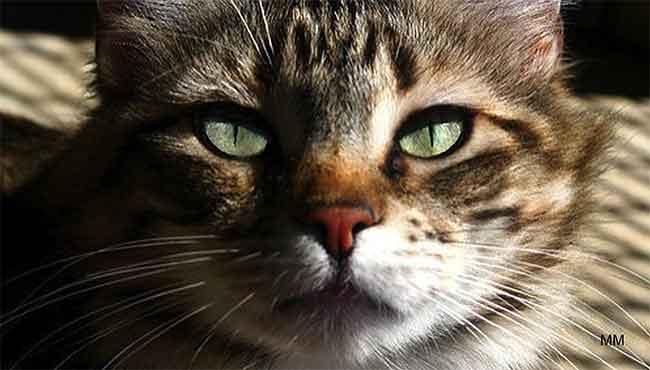 Having just completed Silent Spring, a book suggesting that the use of DDT to protect crops and eradicate malaria would lead to the extinction of songbirds, Rachel Carson waxed sentimental over her achievement:

“After Roger was asleep I took Jeffie [Carson’s cat] into the study and played the Beethoven violin concerto — one of my favorites, you know. And suddenly the tensions of four years were broken and I got down and put my arms around Jeffie and let the tears come. With his little warm, rough tongue he told me that he understood. I think I let you see last summer what my deeper feelings are about this when I said I could never again listen happily to a thrush song if I had not done all I could. And last night the thoughts of all the birds and other creatures and the loveliness that is in nature came to me with such a surge of deep happiness, that now I had done what I could — I had been able to complete it — now it had its own life!”

“In North America, [domestic] cats are second only to habitat loss as the largest human-related cause of bird deaths. It is estimated that cats kill 1.3–4 billion birds each year in the U.S. alone.”

This statistic is verified then qualified by another source calling it “…a staggering number even when compared with the next-largest sources: 599 million estimated to be killed in collisions with windows and 200 million killed by automobiles.”

Given the sensationalist, hyperbolic and often erroneous claims made by Rachel Carson, these numbers would be wonderfully ironic, but like many statistics thrown out with authority, we cannot but ask how they were they arrived at. Many of the statistic-based convictions in Silent Spring have since been proved wrong, but how are the numbers of birds crashing into windows or killed in car accidents any more reliable? How is such data tabulated and verified?  Is there a vast volunteer body of individuals recording such events? In my entire life I have known four birds crash into the windows of my home, all of which were stunned momentarily then flew off. Is a random sampling of fatal instances simply multiplied by the number of houses and cars in America? How many samples? Is this how Carson arrived at her facts?

I’ve never been asked for such information and have never met anyone else who has or knows anyone who has. Such vaguely corroborated assertiveness seems about as scientific as People Magazine presenting us with the “Sexiest Man Alive”. Who determined this? I didn’t participate in a survey of any kind, neither did anyone I know. Most importantly, none of us was asked to try out for the part.

Malcolm Mc Neill’s collection of essays (40) published in International Times in the UK and Paraphilia Magazine in the US titled REFLUX+ is available on Amazon.

View all posts by MALCOLM →
This entry was posted on 15 September, 2018 in homepage and tagged Malcolm Mc Neill. Bookmark the permalink.