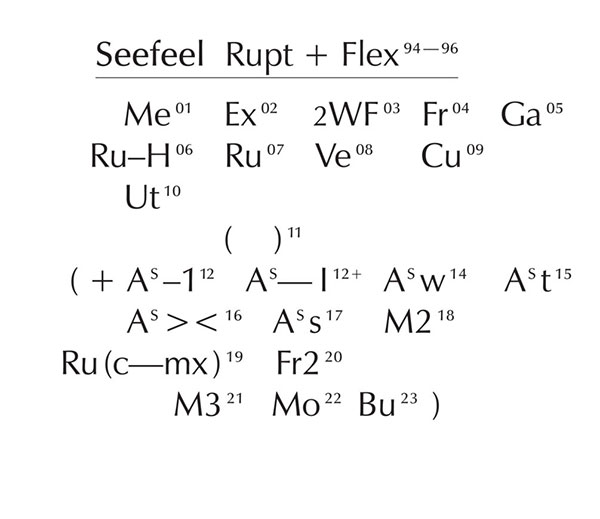 There is little in Rupt & Flex to suggest Seefeel’s blissed-out beginnings making music that sparkled, echoed and droned in multi-voiced delay. This is the later incarnation, whose music is stripped back to focus on beats, clicks, rhythms and pulse, overlaid with minimal textures and sonic intervention, with only a hint of melody and song.

I have to confess I loved early Seefeel, despite a disinterest then and now in what was called shoegaze or dream pop. Seefeel seemed to exist outside those terms, their music was weightless and innovative, taking guitars and voice into new sonic territory. 1994’s Starethrough EP was a bit of a shock and heralded not only a move from the Too Pure label to Warp (where they were the only band with guitars on the roster) but a stripping down and minimalist refocussing.

Some called it ambient techno, others electronica, others simply didn’t know what to make of it. Succour, Seefeel’s first album for Warp was similarly dark and abstracted, although listening to it now I can’t see why I found it at all difficult. ‘Fracture’ is an oblique and relentlessly addictive take on Kraftwerk’s propulsive music, other tracks sound like Aphex Twin, who had remixed a track and become a friend of the band.

Aphex Twin would also release an EP-cum-album, (Ch-Vox), on his own label, which continued the band’s exploration into ambient texture and abstraction. Here, following the very wonderful ‘Net’, which closed the original album, CD3 extends the album with another six tracks. Similarly, CD2 is called Succour+ and  offers 12 new pieces of music, whilst the final CD gathers up three EPs along with a rare remix and a couple of live extended versions.

I’m not sure why I found any of this hard to listen to at the time. Presumably my head was elsewhere, following other musical avenues and I simply didn’t pay attention and make the leap as Seefeel did. Now, I can only immerse myself in this wonderful music with its careful arrangements and juxtapositions of instruments, effects and sound. If you like intelligent, exploratory music you will love this anthology with it’s varied and innovative use of instruments and studio.

I’m glad I have finally caught up and urge you not to get left behind either. If you like vinyl the music is also available as Succour (Redux) on 3LP, (Ch-Vox) Redux on 2LP and St / Fr / SP, which turns the final CD into a double vinyl album.

View all posts by Rupert →
This entry was posted on 8 May, 2021 in homepage and tagged Remix, Revisit and Reassess, Rupert Loydell, Rupt & Flex. Bookmark the permalink.