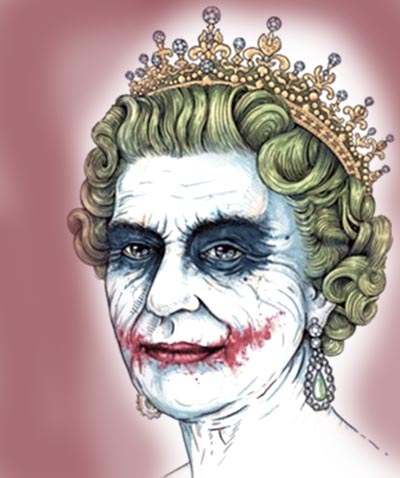 ‘Having read ‘Royal Babylon’, a phenomenal piece of writing by Heathcote Williams, on the website of the International Times, I am reminded that we have every reason to loathe the monarchy and yet have become inured to its existence.’ –  Jeremy Hardy

If 2012 is the year that divides British subjects (or citizens) into Olympian Royalists or Occupy revolutionaries, then Royal Babylon is the poem of the year. Serialized online by International Times, and now available as an IT paperback, it is the single most subversive poem I can think of by a contemporary British writer.

Tellingly, despite its online impact, its steady sales in book form, and its being turned into a film narrated by the actor Alan Cox, this big-hitting poem has been conspicuous by its absence from the public media. Such is modern controversy; a challenging and well-written work is ignored so as to prevent it becoming a succés de scandale. (Instead, people are getting hot-under-the-collar about the innocuous ‘mummy porn’ of 50 Shades of Grey). One review of Royal Babylon has appeared in the TLS, a snide panning by the reactionary ‘JC’, who calls for the Poetry Police to arrest the author. Though it has fans of the artistic calibre of Morrissey and Jeremy Hardy, the intellectuals and critics are keeping ‘mum’. The poem and its message are being drowned out in an atmosphere of mass-jingoism, an atmosphere which intimidates the ever-present English spirit of ‘non-conformism’ and publicly shrouds it. English literature, which owes so much to its courtly tradition, is – in the modern era – still afraid of breaching royal protocol. Literary types can seem much more timid in this department than comedians, songwriters, or film-makers.

An early verse articulates the mass queasiness in a highly comic demotic:

‘Oooh no,’ people would say, ‘you can’t have a go at the Queen,’
Sucking their breath in to indicate caution,
‘Oooh no, not the Queen, the Queen’s above politics you see.
They can’t answer back, can they, so it’s not fair.’

I see Royal Babylon as a stellar example of what Rimbaud called ‘objective poetry’. The author is invisible, his art conceals art. There are scientific principles at work, English empiricism. Yet it has the force of an Isaiahan revelation. The text is a taboo-shattering, information-rich, anti-monarchist onslaught. Williams – wittily – subtitles it: ‘The Criminal Record of the British Monarchy: An Investigative Poem.’ A parody, perhaps, of the public inquiry, this ‘Williams Report’ reaches damning conclusions. Though entertaining at times, it is not entertainment, nor to be taken lightly. The main thrust of the polemic is to challenge the aforementioned popular notion that the ‘the Queen’s above politics’. One cannot hope to throw a serious gauntlet to such an institution as the British Monarchy without authority. Williams’ authority is poetic. Derek Jarman once cast him as Prospero in his version of The Tempest ‘because he is Prospero’.

Others will criticize Williams on a technical level and object that his style is more a lineated, versified prose than poetry. Assuredly, it is not in iambic pentameter, nor is it a rhyming poem, but one written in natural speech rhythms lyrically intensified by being arranged into quatrains. Each quatrain is a Republican ‘zen koan’, a gem of dissenting wit and wisdom; each makes its own point but resonates more generally; and the 70-plus pages of quatrains build up mesmerically to a monolithic statement.

A researched poem, it is specifically indebted to Karl Shaw’s Royal Babylon: The Alarming History of European Royalty, but hones in on the Windsors. Its starting-point is the Sex Pistols’ antidote to the national anthem ‘God save the Queen’, also in quatrains:

At the time it was thought the Pistols’ accusations of fascism
Were outrageous and totally off-target
Yet fascism, defined as corporate elitism plus violence,
Can shape-shift and adopt user-friendly disguises.

Alchemically, the polemic becomes poetry because it succeeds in showing rather than telling, and vividly. Writing of Prince Charles’ Duchy of Cornwall rents and how farmers struggled to pay them during the foot-and-mouth epidemic, a giant vista appears in the small space of the quatrain, a modern historical moment:

With two farmers a week committing suicide in a rural crisis
Publicly the Prince wrung his hands in anguish –
But his tenants were quick to mistrust his crocodile tears,
“The Duchy is sympathetic as long as you pay the rent.”

This verse is so acute in its perception, such a remarkable freeze-frame, it makes modern Britain look medieval, arousing the reader’s sympathy for the plague-ridden peasants and indignation against the tithe-extracting royal.  It asks: why are we so stuck in ancient injustice?

It is not just the verses but the phraseology that makes it poetic. Williams does not bother with ‘deconstructionist’ doubt; his words connect with their targets. It is deadly satire, belly-laughingly eloquent, but also very frightening, as sobering as it is intoxicating. His royals are not Spitting Image puppets, they are powerful plutocrats. Britain’s ‘military-monarchy complex’ is laid bare: the omnilocation-by-media, the racist wars fought for resources, the royal shares in depleted uranium, the grooming of soldiers as human sacrifices.

The poem is Shakespearean. It has a similar effect to reading Shakespeare’s histories, particularly the Henry VI trilogy which portrays the Plantagenets as out-and-out psychopaths. By dint of the depth of its research and the quality of its writing, Royal Babylon offers an astonishing portrait of the Windsors as money-grubbing, tantrum-throwing, empty-headed philistines, addicted to the publicity that has driven them half-mad. The lines have a remarkable pace and directness of voice, also reminiscent of Shakespeare. Like Shakespeare, it lends itself to other mediums e.g. film.

The poem is also highly Blakean in the way it writes about wildlife. The guilt of the Windsors is contrasted with the innocence of the creatures they unceasingly hunt, as soon as they’re out of the public eye. Like something out of a mythological epic, the poem unsparingly itemises the incredible tallies of fish-flesh-and-fowl that are ritually slaughtered by the Royal Family; the book is populated with the ghosts of their victims: ibises, stags, pheasants, even elephants. Prince Phillip’s claim that he is ‘culling not killing’ is laughingly dismissed by Williams’ aside that to the dead animals it’s ‘a distinction without a difference’. Julian Barnes once compared the writer Michel Houllebecq to a ‘big-game hunter’; the metaphor would be appropriate to Heathcote Williams too if he wasn’t himself so obviously against hunting.

The Blakean tone is recognizable in a quatrain on how uranium was found to have poisoned soil at a M.O.D weapons range in Dumfries:

Worms are a pillar of ecosystems through aerating the soil
And aiding the nutrient uptake of plants,
Whom Charles reputedly likes to talk to, though he may now need a Geiger counter
Before addressing his radioactive triffids in Scotland.

This is Anglo-Samizdat at its best. It puts us in touch with the great manifestoes of bygone ages, the dissenting tradition of Coppe/Paine/Shelley, not via archaism of thought and language, or pastiche, but by being stunningly up-to-date and forcefully engaged. The marshalling of facts is marvellous – N.B. this is not an Ickean fantasy or a conspiracy theory – and is woven into a tapestry by a rare anarchic wit. There is pathos in realising the author would have been executed for this in former times. It is not a precious poetry; anyone can get it. But how eloquently it plea-bargains! In a literary culture of rarefied style-chasing, here is a substantial work, a critique which contains its own solution. The writing and publishing of it is all about raising awareness and calling for an overthrow of ‘bejewelled parasites’ and a redistribution of their immense wealth. (It was recently announced that the taxpayer coughed up 32m for the Windsors in 2011, not including security costs.)

Royal Babylon is objective poetry in the fullest sense because it refuses to be a ‘subject’, and argues for citizenry rather than subjection. Like Holocaust by the ‘objectivist poet’ Charles Reznikoff, it condenses colossal horrors into a read-at-one-sitting text, horrors that are ongoing. It too is an essential antidote to the propagandous delerium of Diamond Jubilee, and is a Koh-i-Noor sized diamond of dissent. An elusive writer, Williams has re-emerged with a major political poem.