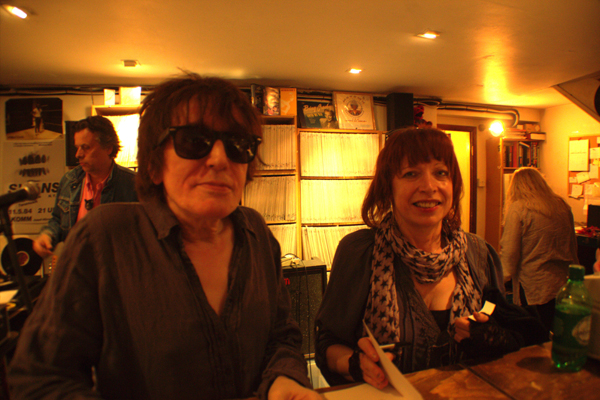 On an unexpectedly balmy evening in April, approximately 60 people, predominantly middle-aged men and ageing hipsters, cram into the stuffy basement of Rough Trade West in Talbot Street to hear a short, sweet set by the fallen angel of 70s British rock, Peter Perrett, guiding spirit of late 70s British rock band the Only Ones. The occasion is to mark the re-publication by Thin Man Press of Nina Antonia’s biography of Perrett, The One and Only Peter Perrett, Homme Fatale. Afterwards, Nina and Peter sit side by side, signing copies of the book, Perrett chatting affably about his plans for the future. As intimate audiences with living legends go, this registers high on the experiential richter scale.

Such events are a rare chance for a close-up encounter with the real person behind the bullshit and hype, the wishful thinking, the broken dreams and promises, the recollections of youth, and an era now well into its twilight years. Accordingly, the audience listen in near-silence as Perrett, flanked by camcorders, his rockstar sunglasses his only defence against the glare of unforgiving curiosity, delivers five songs, backed by sparse guitar fills and occasional backing vocals from his son Jamie. None of them is That Song – Another Girl, Another Planet – Peter having given what seemed like a covert apology for those hoping it would be. I would guess that few people had actually anticipated him doing it, or cared that he didn’t. What followed was spellbinding, and over only too soon. Breathe, and you missed it.

From their debut album’s appearance in 1978 The Only Ones always seemed to be as much as anything a musician’s band, beloved by those like Johnny Marr, but largely overlooked in terms of record sales: an anomaly in those confused and confusing days when the rictus sneer of punk was beginning to show its strain. Too musically adroit to be punk (their drummer, Mike Kellie had been in Spooky Tooth, a late 60s British rock outfit with one classic album and dodgy prog leanings), sounding at that time too trans-Atlantic to be British and lacking the twitchy neurosis of new wavers like Television, Talking Heads or Elvis Costello, the Only Ones evaded classification. Alternately tight and tough, mellow and darkly reflective, they were in many respects the right thing at the wrong time, and when Another Girl Another Planet failed against the band’s expectations to sail effortlessly to top of the charts, they eventually veered off course. Disappointing revenues, internal wranglings and copious quantities of drugs– and the ultimately destructive notoriety that such scenarios attract – put the band early to bed, and left Perrett to become one of rock’s great enigmatic recluses.

But tonight all that is laid aside. Perrett delivers Is This How Much, I’m Yours, Sound the Warning, My Sweet Angel, and Sea Voyeurger in that earnestly fragile voice, and sounding still like a refugee from an alternative-universe version of Lou Reed’s Transformer-era existential musings. It was purely, heart-stoppingly magical.

Afterwards, during a brief chat while Peter signs my copy of the book – an engrossing account, unflinchingly truthful, meticulously detailed, sympathetic but never sentimental or sycophantic: my only complaint is that it kept me awake that night – I ask him if he is playing Brighton anytime soon. ‘No, but we might play Worthing’. Worthing? Uh…Ok. For a moment, this makes no sense – formerly the world’s most eruditely wasted rock band in Worthing? And then, abruptly, it makes perfect sense. All that twisted English gentility and faded, louche grandeur. If Dirk Bogarde were still alive, he might be found of a warm summer evening, in shirtsleeves and panama, quietly clipping a privet hedge in Worthing. And the much-anticipated forthcoming album – would it be an Only Ones or Peter Perrett album? ‘Well’ Peter replies, ‘we’ve got Kellie…but two of the band still aren’t getting on…’

Sadly, some things, even after nearly 40 years, seem not to change. Happily, others remain the same, or improve with age.

The One and Only Peter Perrett , Homme Fatale, by Nina Antonia is published by Thin Man Press, price 12.99, available from all sensible bookshops.

View all posts by Keith →
This entry was posted on 16 April, 2015 in homepage and tagged April 9 2015, Book signing, Keith Rodway, Nina Antonia, Peter Perrett, Rough Trade West, The Only Ones, Thin Man Press. Bookmark the permalink.

One Response to Review: Peter Perrett and Nina Antonia