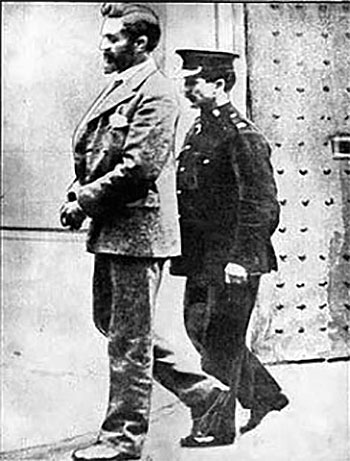 Roger David Casement was one of the truly great men of the 20th Century. He investigated and was instrumental in stopping the appalling crimes against humanity that were been committed while forcing the local people to collect wild rubber in both the Belgium Congo and the Putumayo region of the Amazonian rain forest. A leader of the Irish Rising of 1916 he was hanged in Pentonville Prison and then character assassinated.

Since his judicial murder on August 3rd 1916, no Irish public figure that I know of has been mythologized to the extent he has been. That the mythologizers are in the main those who seek to hide the truth makes the servility and gullibility of researchers, who take the official narrative concerning him at face value laughable. Slowly but surely the webs of deceit, lies, calumny and fantasy that surround his name are been untangled, allowing us to view him for what he was.

There is no doubt that since the time of Cortez, Columbus, the Pilgrim Fathers, European Christian expansionism has been one of the most evil forces ever on this planet. In Ireland it gives solace to many to know that we fought the British Imperial strain of the contagion, tooth and nail for centuries, and never as a race submitted. However it must always be remembered that we also supplied the Empire with many Imperial Warriors who helped enslave their own people and with those who travelled to foreign shores to help our oppressors do the same thing there.

There is also no doubt that most of its chroniclers hide from their readers the facts, gloss over the heroic resistance of the defeated peoples, present them as savages, and whitewash appalling crimes against humanity, committed in the name of progress.

In Africa, the European, whether Irish, English, French, Belgian, German, Italian, Spanish or Portuguese behaved in the same ruthless and inhuman way. The Sand River Convention of 1852 sets the tone. All trade in ammunition and firearms with native people was prohibited. Nevertheless, the Africans fought the advancing whites with determination and valour. Mirambo, the great chief of the Nyamwezi, the black Napoleon, they called him held the slavers at bay for years, and when the monster Henry Morton Stanley was on his first African adventure, Mirambo fought him to a standstill. Stanley was lucky to survive. Spears against bullets. Kabba Rega of the Bunyoro fought a gallant guerrilla war against the colonising power. Bunduki sultani ya bara bara. The gun is the sultan of Africa. The switch from muzzle to breach – loaders widened the technological gap between European and non-western peoples. It accounted for the British victory over the Ashanti in 1873. The Ashanti twice defeated them when the odds were even. Then came the repeating rifle – the Winchester, the Mauser, the Lee Metford and the French Leber. Just in case that was not enough of an edge, the great killers Misters Gattling and Maxim put the final nail in the African coffin.

When the Hereros of South West Africa rose against the Germans, General Von Trotha drove them into the Omaheke sandveld, a waterless oven of sand, two hundred miles long, with these words, ”I the great General of the German soldiers, address this letter to the Herero people. The Herero are no longer considered German subjects. Herero people will have to leave the country. Otherwise I will force them to do so by means of guns. Within the German boundaries every Herero, whether found armed or unarmed, with or without cattle, will be shot. I shall not accept any more women or children They too will be shot.” And he signed himself – the Great General of the mighty Kaiser, Von Thotha. Shades of “To hell or to Connaught” don’t you think.

A Portuguese Jesuit wanted his Government to grant him complete power over the reed in the rivers adjacent to Tete, and all the wands used by the people for their wattle and daub huts. No one was to be allowed to cut either without his consent. Wattle tax, hut tax, cattle tax, head tax, the Africans could hardly breathe without being taxed on the air they used.

Our holy men of God, the missionaries, stayed silent, because they too were under threat. The Boers burnt down mission stations because they did not agree with converting the natives to Christianity.

I must also remember the brave young Boras cacique (tribal chief), Katenere, “who resisted and tried to give back blow for blow”, until he was ambushed and murdered on a lonely Amerindian trail that Roger Casement knew so well.

And when the deed was done, when the gold and ivory, the diamonds and rubber, when the land was divided up, the same old imperialistic hypocrites, the King Leopolds, the Von Trothas, the Windsors, the Churchills, the Chamberlains, the Peters and Stanleys, now bloated and ugly, gorged with loot, tell us, in the same old disinterested, arrogant way, as they slither back into the cracks they slithered out of in the first place, that they did it for Christianity, for Commerce, for Civilisation.

Africa before the coming of the White man was Africa, friendly open and free. The hearts that made it dark were white. Casement blew the whistle and cried stop.

Roger Casement was a poet, humanitarian, a man of action. He anticipated Amnesty International.

It is fitting he should have the last word.

“Everybody in the rubber industry who is sensible of these terrible happenings, whether in Europe, the U.S. or Brazil, should heartily unite in assisting the best elements of Peruvian life to strengthen the arm of justice, and to establish upon the Putumayo and throughout the Montana, wherever the rubber seeker seeks his profit, a rule of right dealing and legality. It may be long before a demoralisation drawing its sanction from so many centuries of indifference and oppression can be uprooted, but Christianity owns schools and missions as well as dreadnoughts and dividends, to bring to this neglected region and to these terrorised people something of the suavity of life, the gentleness of mind, the equity of intercourse between man that Christianity seeks to extend, the former implements of her authority should be more potent than the latter”.