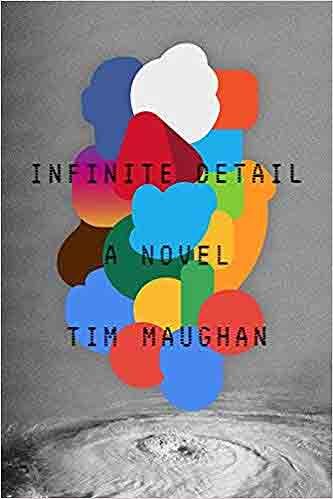 This highly readable and intriguing novel is not easy to categorize. Is it dystopian or utopian, cyberpunk or science fiction? In places it reads as creative non-fiction, or even journalism from the near-future.

It revolves around an area in Bristol, both in the future and in the past (not our past, but the past compared to the fictional future), with chapters headed up ‘before’ and ‘after’. The timelines gradually converge and the story both unravels and explains itself. In the past (‘before’) Stoke Croft was an offline enclave, an area inhabited by people who wished to escape the surveillance, tracking and consumerism rampant everywhere else. A kind of super-hipster ghetto.

In the ‘after’ part of the story Stoke Croft has become an overpopulated enclave populated by a future kind of hippies or crusties. Following a worldwide information and technology crash, life has become almost medieval, with people growing their own crops, and a simple market system evolving. (The Stoke Crofters grow spices in polytunnels to sell as luxury food to those who can afford it.)

Elsewhere the Land Army forces people to work before they get fed, and there is nothing left to loot or find anywhere: shops, malls and everything else lie empty or turned into temporary accommodation. Within the future world we meet several characters that the story revolves around including a dub/electronic musician rescuing, recombining and broadcasting sounds from old tapes and CDs, and Mary, an obsessive artist who draws pictures of the ghosts she can see around her in the hope of paying customers who recognise their lost friends or family.

Meanwhile in the past (‘before’) Rush is developing new systems and programmes that enable Stoke Croft to function offline and also conducting an online love affair with Scott, who is in New York. Later on in the book he will visit Scott, and soon after be separated from him for the duration of the ‘after’ period of this book; something which seriously upsets him and changes how he will live for the rest of his life.

Rush and Anika are two of the characters (there are others such as College, Grids and Melody) who link, as does the setting of Bristol, both timeframes in the book. Anika shows Mary, the mystic artist, that she can focus and connect the computer specs she has been using to see her ghosts. Suddenly everything becomes clearer, suddenly there’s a chance to build a new network (web?) but this time from the ground up, not imposed from the top down.

I’ve deliberately not really explained the plot here, because I don’t want to spoil it for any readers, of whom I hope there will be many. I haven’t read a book so full of ideas for a long time. I love recognising parts of Bristol and how Maughan has made use of the city, I love the fact that I don’t know if the possibility of a new internet is good or bad, and I love the way that – without any preaching or info dumps – this book explains everything wrong about our over-reliance on technology, our laziness in not thinking about what others can do with our information. This is no lazy rant or manifesto though, it’s an intriguing and fast-paced novel about the end of the (our?) world and it’s continuation and resurrection. It’s also about information, technology, love, revolution, society, possibility and change. And it’s absolutely brilliant.

View all posts by Rupert →
This entry was posted on 12 October, 2019 in homepage and tagged Infinite Detail, Rupert Loydell, Tim Maughan. Bookmark the permalink.