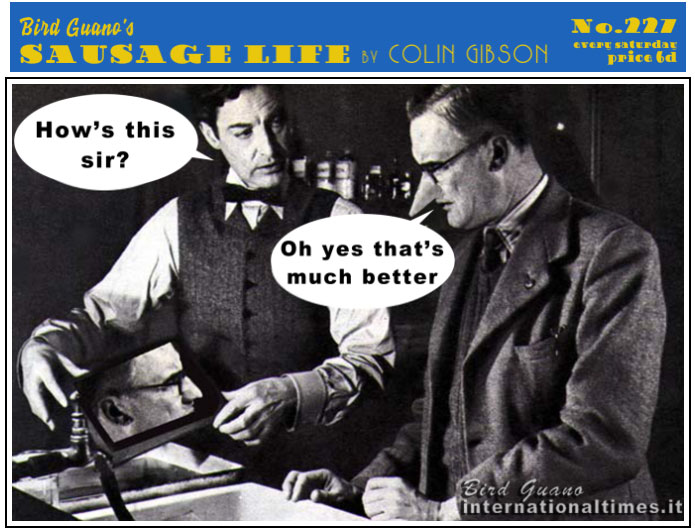 Bird Guano’s
SAUSAGE LIFE
The column that believes the world will end, not with a bang but a Tweet

TV RECAP
Psychomatch (ITV5): The reality show returns with a new cast of cold-eyed sociopaths, each determined to get away with the perfect murder. The new series is set in an abandoned holiday camp in Rhyl.
Smug Island (Dave): Eleven wealthy hedge fund managers are left to their own devices on the Isle of Dogs. Only one of them will survive.
Coronation St (All Channels): Stan & Betty’s divorce is unexpectedly postponed because of road subsidence. Geography teacher Ron, still confused after the snorkelling accident, is confronted by angry parents after forgetting to wear his trousers at school. Angela the midwife has to interrupt a cesarean section when her mother turns up on the hospital doorstep with a sawn-off shotgun after escaping from prison.

IN BRIEF
Over on Sky, the vomit-drenched Australian soap Bulimia Road briefly captured the 18-30 audience before its increasingly thin plots sent it hurling down the ratings toilet. It has been replaced by dour Scandinavian detective series Smorgasbored which is guaranteed to hypnotize viewers with its pessimistic depiction of a corrupt Danish crispbread manufacturer and his penchant for herring and topless female librarians.

FOR FOODISTS
A branch of Bushmeet, the rare species restaurant chain which also caters for vegetarians, has opened in Cockmarlin. The menu includes vegan white rhino sausages, gluten-free Quorn Bonobo heart and pan-fried Bengal tiger penis which is made from Tofu. Frozen dessert specialists Ben & Jerry have released, exclusively for the Bushmeet franchise, a Marmite-flavoured ice cream for people without a sweet tooth.

WENDY WRITES
Unqualified advice for the terminally stupid
Dear Wendy, I recently bought a fondue set in error, mistaking it for a yoghurt maker. Should I put it in the attic with the pyramid razor sharpener and the Justin Bieber singing toothbrush? Or would I be better off selling it on Ebay?
Befuddled, Uckfield

Dear Befuddled,
instead of taking the obvious route, I would urge you to fly in the face of convention. Have a spontaneous weekend in the Ukraine, make a Panamanian flag out of Monopoly money, or sort out those old jockey photos in the cellar before the police find them. Remember, life is a glorious, swirling whirlpool of excess and one dipped toe can easily lead to another. Fondue sets are making a big comeback by the way, and one recently fetched over £10 at auction.

ART CHEESE
Tracy Eminem has made yet another fortune by marketing a T-shirt bearing the hand-written slogan VWLS SCK. The item, made from Egyptian mummy linen and signed by her personal assistant, retails at £750 in a limited edition of 10,000.
By contrast, José Tonto Guacamole’s exhibition, DIY, at Upper Dicker’s Round Cube Gallery, which consists of various power tools suspended in whale urine, failed to gain any attention at all. “If you read the manifesto, that was precisely my plan” said the Spanish installation artist, “Success is a corporate delusion which, as an artist, it is my duty to avoid at all costs.”

GOLF CRAZY
The World Crazy Golf Championship 2021 takes place at Hastings mini golf course this coming June. To celebrate the fact that golfing legend Tiger Woods has agreed to take part in this year’s tournament, staff have been working around the clock constructing a brand new hole, to be known as Eurogedden. Head organiser Ralph Swyne explained: “This new hole, featuring a 3D facsimile of top-hatted toff Jacob Rees-Mogg, will delight participants and audiences alike. The idea is to propel the ball into The Mogster’s thin-lipped mouth as his giant gloating head bobs around on a spring. Once the ball is inside, the head flies apart, the top hat rockets into the air and tiny razor blades shoot out in random directions”. Asked whether this might not contravene health and safety regulations, Swyne reassured me, “Not at all. Now that we are out of the EU’s evil clutches, we will be free from the suffocating, and frankly namby-pamby PC-gone-mad agenda which has been set by unelected and let’s face it, foreign officials.”
“From 2023 we will also be allowing novelty exploding balls and powered laser-guided putters which use compressed nerve gas.” he added.

View all posts by Colin →
This entry was posted on 30 April, 2022 in homepage and tagged Colin Gibson, SAUSAGE 227. Bookmark the permalink.