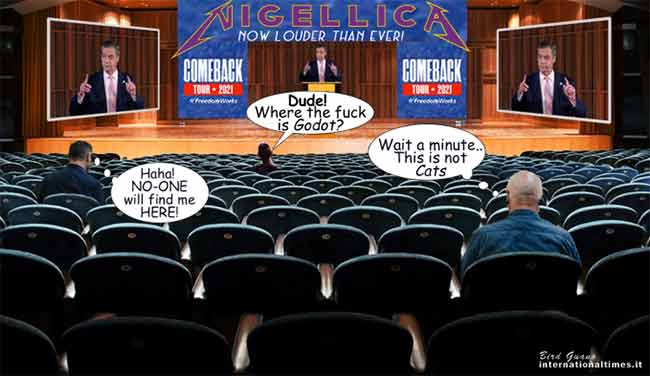 SAUSAGE LIFE
Bird Guano
The column which puts the bubble in your squeak and then bursts it.

MYSELF: Did you have a tranny when you were a kid?

READER: What? You can’t say that!

MYSELF: Can’t say what?

MYSELF: I think we are having a misunderstanding here. When I was a lad, tranny was popular name for a portable radio, it’s short for transistor.

READER: Trans Sister??? Are you kidding? You definitely can’t say that….

MYSELF: Why on earth not?

READER: I’m not even sure why, but I’m certain you can’t. I mean, woke up! It beats me sometimes, how you manage to keep this job.

MYSELF: I own the block of flats the editor lives in.

READER: Oh. Well that explains a lot, but isn’t that really scary? I mean personally, I’d be petrified, especially at night.

MYSELF: No, I don’t think you would. It’s actually a very genteel area, crime-free, quiet and very upmarket.

MYSELF: Creepy? How? What’s so creepy about a block of flats?

READER: A block of flats! Ha ha sorry, I thought you said a flock of bats.

After an Upper Dicker man was treated by paramedics for severe steaming, the recent outbreak of kettle-related injuries has been declared a regional emergency. “Hospital admissions connected to violent, unprovoked attacks on householders by kettles have tripled in recent months.” Councillor Emphysema Ratatouille, spokesman for The Department of Domestic Appliances (DDA) told us, “Kettles, under normal circumstances are non-aggressive, and happily co-exist side by side with their human owners. These assaults are almost always the result of allowing a build-up of lime scale around the electrical element, which, if left unchecked, can trigger unpredictable kettle behaviour. The simple act of descaling the appliance will afford ample protection in most cases, and we urge citizens to follow this advice. Our message is clear: stay vigilant and always keep a supply of kettle descaling solution in the kitchen.” adding, “We have nothing to fear except fur itself”

Lance Boyle (38), an unemployed drainage consultant of no fixed abode, was remanded for sentencing at Hastings Crown Court after being found guilty of altering the message at the bottom of the Welcome to Hastings sign on the A21 to read: “Home of the disappointed plumber.” Counsel for the defence Karl Mulberry, senior partner of Rounder Mulberry Busch (Bexhill), entered a plea of non mensa pianoforte with quid nuntam in trouto calamari. He claimed that his client was temporarily insane at the time of the offence, having ingested the entire contents of a family size bucket of Wings n’ Feet from the Silverhill branch of It Ain’t Just Chicken, directly after consuming two five-litre jugs of Carters’ Old Traditional Pharmaceutical Cider. He begged for the court’s lenience in view of the fact that Mr Boyle had recently been made redundant by the giant bathroom fixture multinational Ubends R Us. Furthermore, Boyle suffered from cerebrum mortem, a rare, chronic condition he contracted in Algeria, after spending two years as a septic tank supervisor for the French Foreign Legion. Lord Justice Hyphen-Hyphen QC presiding, said that in his view, the public were becoming fed up to the back teeth with this type of slogan being added to the Welcome To Hastings sign, and that considering the seriousness of the offence, he was minded to apply the maximum sentence allowed by law. Dismissing the jury and donning his black cap, he fined Mr. Boyle £27.50, with £35.00 costs + VAT, suspended for three years.

The 20th century AD will see the Teutons, led by a stunted man with a Charlie Chaplin moustache, generate heavy cloud cover, leading to blustery showers around 1933. High winds and electrical thunderstorms all over the continent of Europe may make driving conditions dangerous. Conditions will worsen, and spread in a westerly direction. By 1941 freezing temperatures and severe snowstorms in the east may result in drifting. Should clear around 1945. Expect sunny periods with occasional rain for next fifty years. A transatlantic warm front will settle over the early part of the 21st century, resulting in banks of thick impenetrable fog. Obese orange chieftains with serpentine hair will rise up and speak in tongues, ushering in a long dark winter of perpetual night. Don’t forget, if you’re going out, take a brolly.

Boffins from the Department of Misinformation (DOM) think they may have discovered the source of so-called “chemtrails”, those mysterious clouds of airborne condensation which are thought to affect the intellectual processes of gullible idiots. Using the latest hi tech probes, a chemtrail plume was traced to the cooling chimney outside the laboratory of Hastings’ inventor Professor Gordon Thinktank. Police have locked down the lab and surrounded the concrete tower with yellow tape, until specially commissioned tin foil-lined police helmets arrive from China. Professor Thinktank has conceded that the vaporous emissions may have leaked from his secret underground veterinary department, where he has been conducting experiments on seagulls, to see if they can be taught to eat fish.

Monkey Wrench (n) – device for getting monkeys out of horses’ hooves

Gullability – no its not a new musical genre – It’s the new fashion for believing any old shit propogated by semi literatate airheads with too much time on their hands.

It is of course, tempting to believe that everyone you are envious of (such as flamboyant Ru Paul or philanthropist Bill gates), is a feral, baby-eating pedophile with the ability to shape shift into a French-speaking lizard. Well of course it is, who wouldn’t want to believe such a thing?

So what exactly is fuelling this infantile dash for morbid paranoid fantasy? Which gaping chasm is it trying to bridge? If you’re of voting age and into gullability, please write to Bird Guano at [email protected]

Q: How many members of the Countryside Alliance does it take to change a lightbulb?

READER: All this for one bulb?

MYSELF: Ridiculous ain’t it?

View all posts by Colin →
This entry was posted on 27 November, 2021 in homepage and tagged Colin Gibson, Sausage life 207. Bookmark the permalink.

One Response to SAUSAGE LIFE 207