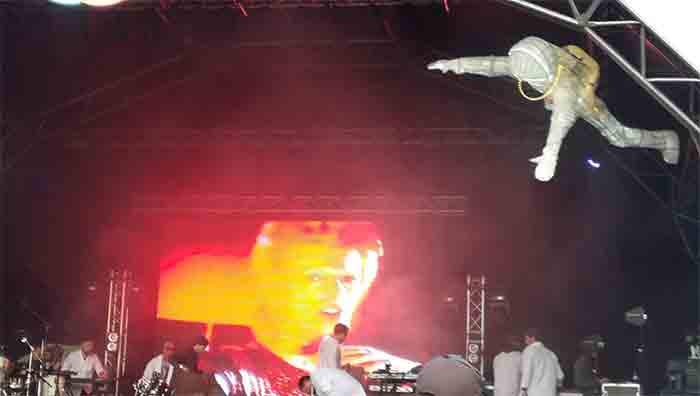 When I was 8, my Dad got me up at two o’clock in the morning to watch the moon landing live. Somewhere, there is a photograph of the TV in the corner and the moon hanging in the night sky outside our window. It seemed impossible that the blurred black and white images were coming from so far away but it felt like the beginning of something, felt like science fiction coming true, the future arriving before time.

Of course even at the time there were conspiracy theories and criticism. Apparently in 2019 more people than ever believe the whole thing was faked; certainly there are serious question to still be asked about the cost and how much it was to do with American patriotism and the Cold War rather than science. Singer-songwriter Larry Norman put it this way a few years later in his song ‘Reader’s Digest’, a clever and sardonic piece of cultural critique and social commentary:

It’s 1973, I wonder who we’re gonna see
Who’s in power now? Think I’ll turn on my TV
The man on the news said China’s gonna beat us
We shot all our dreamers, there’s no one left to lead us
We need a solution, we need salvation
Let’s send some people to the moon and gather information

They brought back a big bag of rocks
Only cost thirteen billion. Must be nice rocks

50 years later, everyone has put those doubts, worries and concerns aside for the moment, and is having a nostalgic wallow in self-congratulations, and having a bit of a party too. By the end of last week, however, even I was bored by never-ending obsessive repeats on TV and the resurrection of James Burke. Where has he been hiding for so long? (I did have a rummage though and find a set of posters I had on my bedroom wall at the time… a free offer with some cereal I think!)

Space fatigue aside, I stirred myself to go to the Apollo 50 festival at Goonhilly Earth Station, where they beamed the Moon landing transmissions to Europe. The day offered an intriguing mix of science, film and music (and apparently there was a bookshop, though I only found that out the day after), but I missed a few hours in the afternoon as I had to go and be a parent-taxi elsewhere. A little bit convoluted as one had to park then get a shuttle bus to the site, or the reverse, each time you exited or entranced. But security were friendly and the queues good-natured.

There’s something pretty impressive about the array of satellite dishes at Goonhilly, both the newer ones you can’t get near, but also the disused [?] one, nicknamed ‘Arthur’, which you can walk round. It’s a bit of a DIY version of the future, much more lo-fi Meccano than anything slick or as ‘finished’ as you’d expect. There’s also a visitor centre full of information you couldn’t read because there were kids’ workshops happening in front of the display boards, a good array of food stands and bars for the day (they even did a special limited edition themed beer), and what looked like a busy schedule of screenings and talks until the music starts in the evening.

Despite all these, the main response of the strange mix of boffins, geeks, families and fans milling around – plus a surprising number of people in fancy dress kit, be that Star Trek, aliens or full astronaut suits – was that there wasn’t enough to do. Perhaps starting at 2pm would have worked better? Certainly, a lot of families found it difficult to keep their children entertained all day, and a surprising number headed home before the evening concert in the main arena even started.

The Bowie Lounge put their own unique twist on Bowie songs (no surprise there), with some exquisite adaptions and re-versionings, and an outstanding violinist. The poor dance choreography mid-set was the only low point in an otherwise formidable outing for this local bunch, who despite being more used to playing small intimate venues held the arena crowd’s attention. Bowie would pop up onscreen throughout the evening in between bands, highlighting how Major Tom, Ziggy and the singer himself have become associated with all things science-fiction and futuristic. 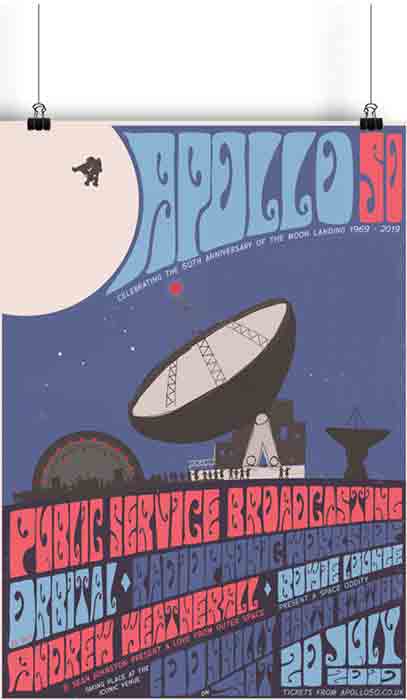 Next up were the BBC Radiophonic Workshop, who came across as a bunch of eccentric boffins having fun with sound (or perhaps an Olde English Tangerine Dream?). They cracked jokes, usually directed against themselves, swapped instruments, made weird noises over complex rhythms, and generally had a good time whilst premiering a new composition for the event and eventually playing an extended freakout version of the Dr Who theme tune. I don’t want to knock ’em but I’m not sure what we gained hearing them live: the studio seems to be their natural habitat. But good enough.

Unlike Public Service Broadcasting, who for me were the real stars of the show. Their studio albums can be a little ‘cool’ in tone, focussing as they do on samples, but onstage it all came alive, with guest astronaut dancers, a live brass section, and some very funky guitar and keyboard solos. Not to mention superb use of film and said samples. And in addition to the band’s own visuals, satellite dish Arthur got used as a backdrop for projections, making it hard sometimes to know whether to watch the stage or turn round!

PSB played the whole of their outstanding The Race for Space album, a history of the Space Race in 9 songs, with the audience enthusiastically and energetically joining in the ‘Go!’ chant that punctuates the song of the same name. I was looking forward to seeing the band anyway, but they exceeded my expectations – if you get the chance to go and see them, do.

Orbital did their DJ dance set next. If you like that kind of thing I am assured they were awesome, but they’re not my cup of tea and I headed off home, as punters were busy still arriving, presumably for Orbital and also the all-night Andrew Weatherall party later on. Anyway, happy birthday Goonhilly, happy birthday Apollo 11, well done everybody. My feet are still sore and my ears are ringing, but I had a good time, tried the One Giant Leap ale (in the name of research, obviously) and bought a t-shirt. Now that’s done, let’s hope nobody else wastes billions of pounds or dollars more exploring space when there’s so much to be sorted down here on earth. Over and out. 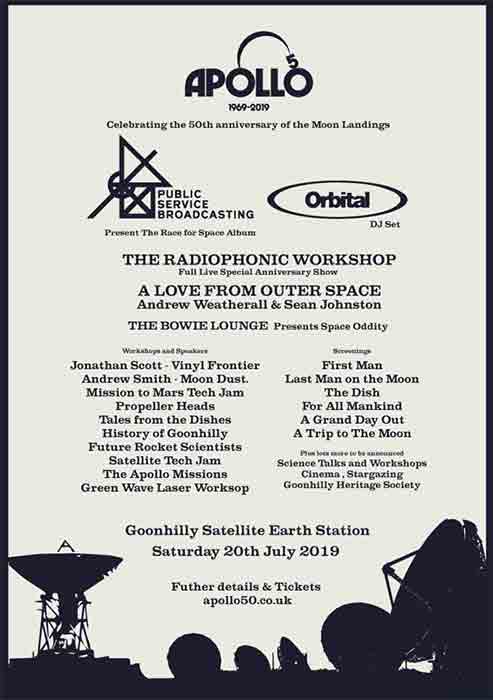 Public Service Broadcasting unveil the video for the first single from their upcoming second album, ‘The Race For Space’. A brassy, funk-heavy superhero theme song for the most famous man in the world at the time, ‘Gagarin’ reveals a new side to the band – not least their considerable dancing skills.

Once again given access to newly acquired BFI footage, this time of the Soviet space race, PSB’s J. Willgoose, Esq. explained the rationale behind the song: “We didn’t want to be too literal in our interpretation of the material we were given – material that was full of heroic language and a sense of exuberance, with lines like ‘the hero who blazed the trail to the stars’, and ‘the whole world knew him and loved him’. It seemed more appropriate to try and re-create some of that triumphant air with a similarly upbeat song – and when it came to creating the video, the best way we could think of to communicate that sense of joy was to get our dancing shoes on.”

Contains footage from ‘Voyage to the Stars’, ’10 Years In Space’, ‘Man Remains on Earth’, ‘Man Returns from Space’ & ‘Red Moon’, all BFI National Archive and used with kind permission

Commissioned with help of our friends at Radar Music Videos
http://www.radarmusicvideos.com/home/…

View all posts by Rupert →
This entry was posted on 27 July, 2019 in homepage and tagged Public Service Broadcasting, Rupert Loydell. Bookmark the permalink.