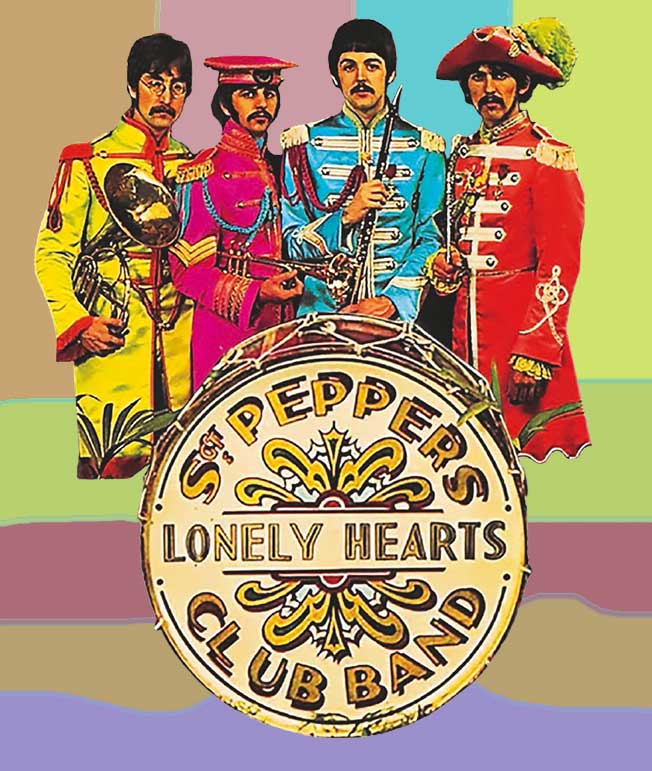 Bastard children of JFK and the Bomb,
we’re a roofless house the hard rain falls in,
choosing to dance if we can’t stay dry.

Never in our lives a summer like this,
neither working nor studying, uncurfewed,
happy to sleep on Carol’s floor, Susie’s
sofa (or better yet in their beds), pull
philosophical all-nighters in Riverside Park.
This is Dylan’s no direction home
and it feels fine.  Escape velocity
from the old and outworn guaranteed,
the ship to another world is boarding
and we’ve all signed on.  We take the unseen
Captain on trust, a head like us.
The Beatles lead this exodus
with an album not rock so much as
fragments of a broken ordinariness
recombined and cleansed with perception,
“kaleidoscope eyes” turned both forward
and backward, both outward and inward,
shot with the melancholy of leaving home
which we feel but can’t admit, sitting still too fast
to let those clinging hands pull us back.
Not much is getting made now, now is about
looking and listening, listening obsessively
as if to crack their secret, the Beatles’
album in constant play on stereos in
every hippie house.  And almost every
evening we pass a joint and crowd
around the piano at the Coffeehouse
Extemporé to sing along with Fat
Jim’s seamless accompaniment, everyone
already knows the whole album by heart. . . .
Committed to wherever the trip may
lead — which, despite our youthful faith
that it’s got to be better than where we came
from, is anything but clear in the amplifying
prisms of that vision in which we hover —
we don’t understand it any more than
our parents do, might say if we were asked,
We can’t tell you, but we know it’s ours.

Tweet
This entry was posted on 5 July, 2017 in homepage and tagged NV, Thomas R. Smith. Bookmark the permalink.