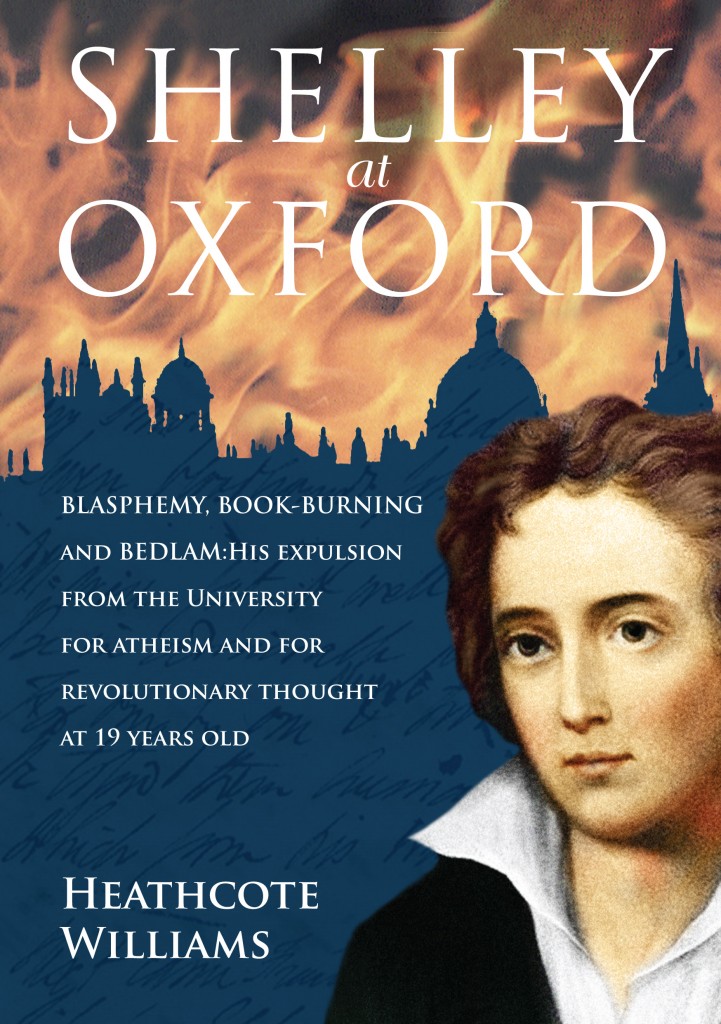 Had a large, bow-fronted window

For displaying their latest wares.

Aged 19, Shelley flooded it with a pamphlet

On ‘The Necessity Of Atheism’.

Which he could only get printed in Worthing

Since no one in Oxford would touch it. 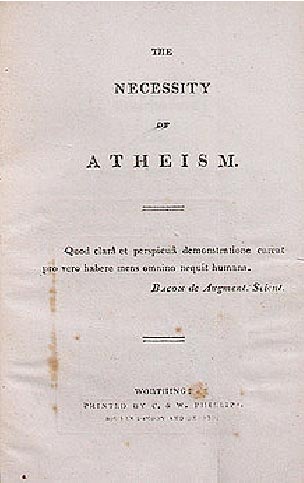 Which promoted the State superstition,

With scores of clergy and bishops with mitres,

And crooks for herding their sheepish flocks.

To smite their enemies; to kill off their livestock

And do away with Egypt’s first born –

Whose hymns such as, “The rich man

In his castle”, and “the poor man at his gate.

“God made them high and lowly

“And ordered their estate” suited a church

Which cravenly sanctioned the status quo

By its designating special pews to favored grandees

And by being supine on class-ridden relations.

The University was funded by property and their printing Presses

Which had a monopoly on the printing of Bibles:

‘We get your land and your diamonds and your gold

While you? You get to be good with our holy books.’

The imperious, “Slaves, obey your masters”

Was a strategic text from this biblical rule-book

And in Oxford’s hands the book became a colonial talisman –

With its presses printing a million copies a year –

Now found they were at George the Third’s mercy.

Kings, according to the British Establishment’s self-deception,

Got to be kings thanks to their British God,

Though to an astute Shelley, “the monarchy is only the string

Which ties the robber’s bundle.”1

Meanwhile the celibate dons of the State religion

Then gnawed at ripe game-birds shot on college estates,

And washed them down with hogsheads of claret.

This academic mafia – every whim indulged

By the colleges’ underpaid servants –

Was hired to cook up the date of Creation

Or to invent the location of Eden.

After grasping such numerological nettles

As counting angels dancing on a pin,

That had caused man’s original downfall.

Such prurient topics were languidly discussed

By this all-male institution

Until Transubstantiation took over:

When Oxford’s church mice had been found

To have been chewing holy wafers –

Theologically troubling, for if the mice

Had consumed the Christian message

By their nibbling on its spiritualized biscuits –

Then, theoretically, couldn’t the rodents be resurrected

Even though they’d just been exterminated?
Although Oxford’s dons might have been more usefully stretched

By addressing their minds to the poet’s challenging pamphlet,

They scurried off, fearing it’d upset the applecart,

And instead demanded Shelley’s career be ended.

A fellow of New College, the reverend Jocelyn Walker

Ordered Munday’s to burn every copy,

Though he’d be keeping one back to show the authorities

As evidence of blasphemous libel.

It happened that Munday’s bookshop had caused a previous sensation

With another pamphlet of Shelley’s.

When someone called Margaret Nicholson, a needlewoman aged 40,

Had taken a dessert knife to King George. 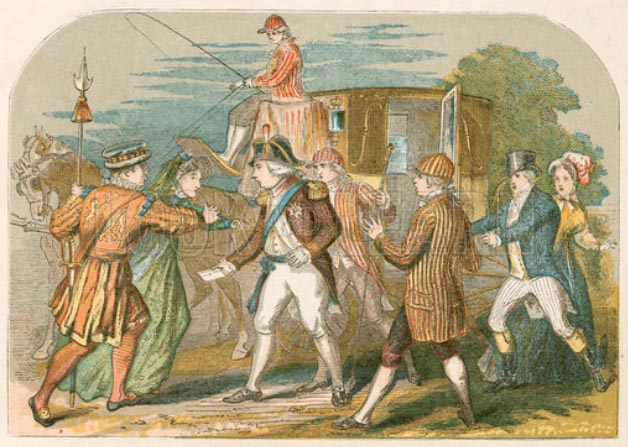 And was then arrested and sent to an asylum.

Mischievously, Shelley had pretended that Nicholson was his aunt –

A woman given to poetic composition –

And Shelley seized the opportunity to attack the king in verse,

He railed at the King for his tyranny.

And published his tirade under the name of Margaret Nicholson

Knowing that he could do so with impunity. 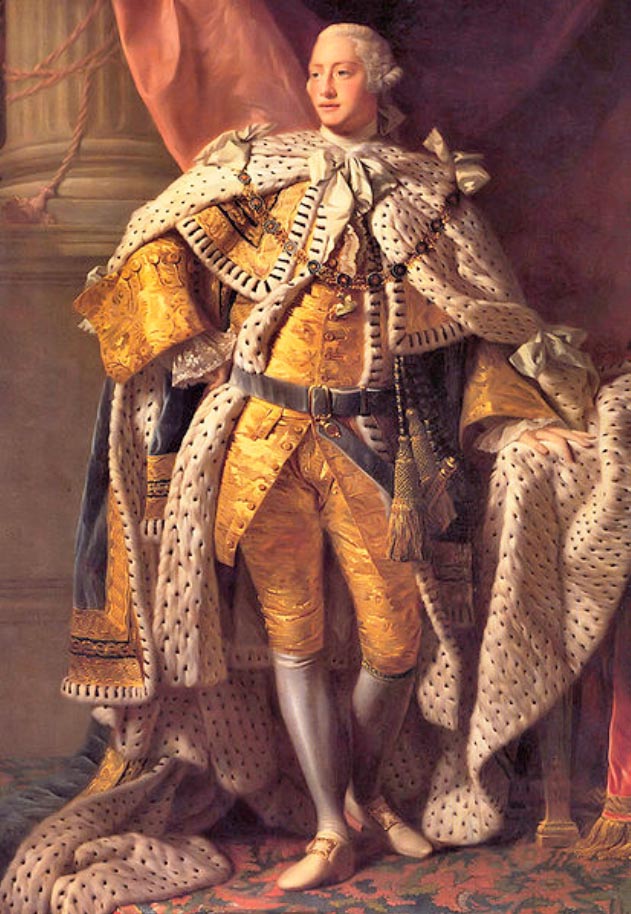 Shelley then asked Munday to print the failed assassin’s verses

(Which Shelley claimed had been found on her person) –

These bloodthirsty verses were written

By a courtly warmonger called Whitehead,

To be sung before George at St. James’s:

“To arms, to arms, ye sons of might./ And hail with sounds of war the new-born year ! /Britannia, from her rocky height, Points to the Gallic coast, and lifts her spear!/

To promote war against revolutionary forces

And Whitehead’s inciting a ‘King and Country’ bloodlust

Could persuade the country to fight for any lie:

“Th’ immortal hatred, which by turns /Wakes and sleeps with fury burns: New cause of just offence has Albion found, /And lo! it bleeds afresh, th’ eternal wound!”

Thought this demanded a response:

And so used the needlewoman’s purported poems

To lay into the royalists’ warmongering vanity:

“Monarchs of earth!” Shelley wrote, “thine is the baleful deed,

Thine are the crimes for which thy subjects bleed.

Ah! when will come the time, when o’er the plain

No more shall death and desolation reign?

When will the sun smile on the bloodless field,

And the stern warrior’s arm the sickle wield?

Not whilst some King, in cold ambition’s dreams,

Plans for the field of death his plodding schemes…” 2

Oxford had been the royalists’ base in the civil war

And so traditionally still fawned upon royalty;

It benefited from royal Charters, royal grants, and royal visits –

Yet here was Shelley saying that kings should be got rid of:

“…April’s sunshine is a Monarch’s smile,

Kings are but dust – the last eventful day

Will level all and make them lose their sway.

Will dash the scepter from the monarch’s hand

And from the warrior’s grasp wrest the ensanguin’d brand.”

Had been turning England into a police state:

You could be transported for life to van Diemen’s Land

Yet Shelley continued in this seditious vein

Fired up by overseas war reports

Of Britain’s empire and its military massacres –

All given the royal seal of approval:

That thy work, Monarch, is the work of Hell.

‘It is thy work!’ I hear a voice repeat,

Shakes the broad basis of thy bloodstained seat;

And at the orphan’s sigh, the widow’s moan,

Totters the fabric of thy guilt-stainedthrone -

‘It is thy work, O Monarch;’ now the sound

Fainter and fainter, yet is borne around,

Yet to enthusiast ears the murmurs tell

That Heaven, indignant at the work of Hell,

Will soon the cause, the hated cause remove,

Which tears from earth peace, innocence, and love.”3 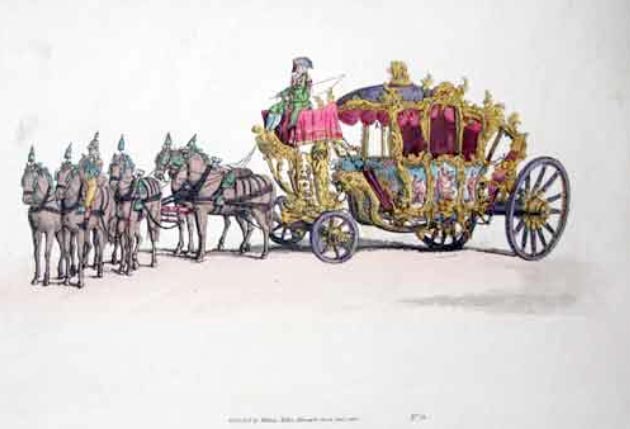 1  P. B. Shelley, A Philosophical View of Reform, written in 1820, but not published until 1839. cf Paul Foot, ‘Shelley’s revolutionary year’ the Peterloo writings of the poet Shelley with a critical introduction by Paul Foot ­– “That sentence made a good headline for Socialist Worker’s coverage of the Royal Jubilee of Queen Elizabeth in 1977.” P.F.

3  Posthumous fragments of Margaret Nicholson; being poems found amongst the papers of that noted female who attempted the life of the king in 1786.

View all posts by Heathcote →
This entry was posted on 17 September, 2012 in homepage, Uncategorized and tagged Heathcote Williams, Percy Bysshe Shelley, Shelley at Oxford, Shelley's expulsion 1810, The Necessity of Atheism, University College Oxford. Bookmark the permalink.

6 Responses to Shelley at Oxford 1