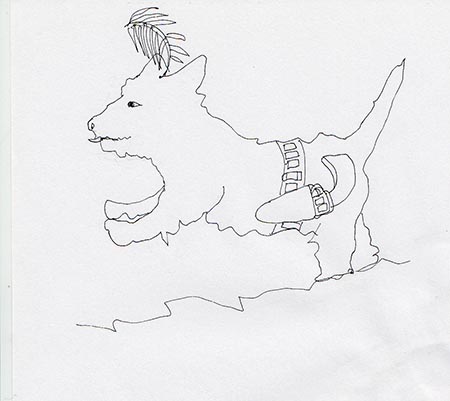 Shoot out at Dead Man’s Creak

There is one genre which dogs all love: the Western. Providing that the hero is a dog they cannot get enough of them. This story brings a taste of the Old West, when things were a mite tougher and dogs were dogs.

Although it is well past noon the sun is still high and heat waves shimmer across the valley floor, deep in the heartland of Nevada. Dust devils send their plumes high into the air to be caught by the hot wind and swept lazily across the desert plain, until they dissolve into the ever present haze which obscures the far horizon and only the distant mountains rear their rocky peaks into the pure air above.

The small town of Dead Man’s Creak nestles at the bend of a river which meanders its way across the valley floor. Its inhabitants are a close-knit community, the Indian wars are not long over and many of the older men had participated. They are proud of their little town and do not take kindly to strangers. Down at the veranda of the general store men sit around on wooden crates, whiling away the afternoon with talk of cattle and horses, and punctuating these discourses with copious ejaculations of tobacco juice.

‘Who in the hell is that?’ asks one of the men, shading his eyes as he peers far down the main street, where riding in from the desert comes a lone horseman. At this distance his form is indistinct until, wavering in the heat it slowly takes shape. Now a small dot can be seen travelling at its side which finally metamorphoses into a yellow dog following close upon the hooves of the horse. The men all strain their eyes. ‘Don’t seem to recognise that fella,’ says one and: ‘No, nor me neither,’ from another. There is only one prognosis; Stranger!

Now the horseman reaches the end of the main street which at this hour of the day is almost empty. The men on the store veranda are still and expressionless as silently they watch the stranger. They take note of the hawk-like face and the low-slung holster which hangs down almost to the knee, the signs are there for all to see – gunslinger – and their eyes shift nervously.

‘Better go git Peg-leg,’ says one of the men and he makes off across the back lot to the Sheriff’s office,, from where Peg-leg, the old Indian fighter maintains order in the town. There are some who say that Peg-leg is too old for the job but there ain’t nobody in town would dare call him out and people are mighty careful when he’s around. The stranger pulls his horse up and ties it to the saloon rail, then pushes his way through the swing doors and disappears, while the yellow dog slinks into the crawl space beneath.

The dog’s name is Maisie and she has been with McGrew for almost a year now, becoming used to this nomadic life, although she still misses the regular meals to which she had become accustomed at Jed and Lucille’s little ranch where she had been born. However, all good things come to an end she had learned, when Jed had sold her to McGrew for two plugs of chewing tobacco and a small sack of coffee. But now she had a simple role guarding the camp at night, and very occasionally providing specialist back-up for McGrew when he gets into trouble.

McGrew is a volatile man with a short temper which means that he is frequently called out. Fortunately he is pretty fast on the draw and with most of the amateur no-hopers who challange him he has no trouble beating them to it. Sometimes however, McGrew gets nervous and this is where Maisie comes in. He has taught her some simple finger signals which he uses whenever he comes up against some guy who looks just a shade too fast for him. At the moment of confrontation, when the two opponents face each other with hands hovering over their pistol butts, McGrew gives a small flick of his little finger and Maisie, sneaking up behind the other fellow seizes him by the leg and bites as hard as she can.

Keeping their eye on McGrew whilst being painfully distracted in this way has so far been impossible for any of his opponents and McGrew has had no trouble drilling them full of holes. Today’s trek however has been a long one, and now Maisie lies in the shade beneath the sidewalk and takes a rest. She is soon disturbed however by a small group of town dogs who have observed her arrival. They approach and stand quietly watching her, but she pays them no attention.
‘Small town hicks,’ she thinks, ‘they better keep outta muh way.’

The town dogs however are working themselves up into a state of righteous civic outrage, who does she think she is? They reason and confer together over the issue while Maisie watches them with one bored eye, and eventually a scrawny looking hound steps forward to perform the role of spokesdog. He coughs nervously then: ‘Where ya’all from stranger?’ he asks.
Maisie has been in this situation many times before and knows exactly how to deal with this.
‘Listen mister,’ she snarls. ‘If ya’all don’t back off now I’m going to have to get out from under here, an‘ if I do, you ain’t going to be liking it. Now back off!’
The town dogs are not used to this sort of talk, especially from a lady; they are thrown into some consternation and whisper amongst themselves. A little Chihuahua raised her voice in Maisie’s direction. ‘We only wanted a sniff,’ she complains, but Maisie scorns such bourgeois practices.
‘Go sniff each other,’ she growls, and such is the menace in her voice that the town dogs are dissuaded from further conversation and beat a hurried retreat. The last Maisie hears is the lone voice of the little Chihuahua as they disappear down a nearby alley. ‘But we’ve already sniffed each other,’ she grumbles.

Just then McGrew leaves the saloon and simultaneously Peg-leg arrives on the scene. He comes straight down the middle of the street and stops, and McGrew, seeing the star on his leather waistcoat, gives a short laugh and makes as if to swagger off.
‘Hold it right ther stranger.’ The Sheriffs voice comes cracking like a bullwhip down the rapidly emptying street and a row of timorous faces line the top of the curtain in the barroom window. McGrew turns slowly around, his gun-hand hovering over the low-slung holster. ‘What’s that mister?’ he says carefully.
‘Yew heard me stranger,’ says the Sheriff. ‘Just turn right around and leave town now or things is going to get might unpleasant fer you.’

The old Indian fighter’s eyes are narrowed to flinty chips and his gaze falls like a bird of prey on McGrew, who returns his look without fear; he has met shaky handed old guys like this before and doesn’t consider him a problem.
‘Thet so old timer,’ he sneers,, ‘and jist what d’ya think yer gonna do about it?’
‘What I’m gonna do is give you five seconds to git; and then you better go fer your gun.’
McGrew looks again at the Sheriff, he is old for sure but the look in his steady eye causes McGrew to think again. This old fella looks as if he can handle himself and he ain’t for taking any chances. The Sheriff begins counting and McGrew makes ready to draw, then quick as a flash he gives a small twitch to his little finger. It is Maisie’s signal and she sneaks from beneath the crawl space and keeping her body low slinks up behind the Sheriff.
‘Two,’ counts the Sherriff, who now fixes his unwavering eye on McGrew.
‘Three,’ he says and again McGrew’s little finger twitches and Maisie, her fangs bared, leaps forward and sinks her teeth deeply into the Sheriff’s leg.
McGrew, ready to draw the moment the Sheriff’s attention is distracted by this painful assault is astonished to see that the steely old eyes continue their unwavering regard, and Maisie, frustrated and confused doesn’t have enough sense to go for the other leg.
‘Four,’ says the Sheriff. ‘Thet little ’ol yalla dawg of yours shore needs its teeth a sharpening.’
Now is the moment of truth for McGrew and he has one second to make up his mind. As the Sheriff’s hand begins its downward swoop, McGrew’s slowly raise above his head.
‘Wa-all thet’s better,’ says the Sheriff. ‘Now vamoose!’
McGrew turns slowly around and with bowed head, turns towards his horse. Untying the bridle he mounts and with a touch of his heel sets it into motion. This action brings the barroom cliental out onto the street, soon to be joined by the men from the grocer’s veranda, from the safety of which they had watched their Sheriff in action. The Mayor comes over and congratulates the Sheriff. ‘Well don Peg-leg,’ he says, but the Sheriff merely shrugs his shoulders, turns his head and spits; he ain’t the kinda man to patronise.

Meanwhile Maisie is hiding beneath the saloon. She had watched McGrew as he rode shamefully out of town but had been too embarrassed to join him. Under the watchful eyes of the town dogs such an ignominious exit would have been unbearable. She lay as far back into the shadows as she can get and waits for nightfall, and when it is dark she makes her way through back lanes to the edge of town and there comes to a momentous decision.

‘McGrew is out of it,’ she thinks. ‘The best thing I can do is find my way back to the old ranch where I was born. Back to Jed and Lucille and regular meals.’ The idea is attractive and, raising her nose into the night wind she begins casting around for clues, and before long knows her direction beyond any doubt.
Maisie’s journey takes many days and when at last she hobbles over the last rise her paws are bleeding and she is plumb wore right out. Her tired eyes light up however, when she sees the ranch below, and a last surge of energy spurs her into a limping run. There is Lucille, just tipping the pork and beans into a pan, and there is Jed mending a harness near the door. She begins to bark in the final stretch and Jed, looking up stares in amazement.

‘Well I’ll be doggone, he says, pushing back his battered old Stetson and scratching his head.
‘Come and lookit here Lucille,’ he calls, and out she comes with a big smile for Maisie.
‘Wa-all,’ says Jed, ‘I guess you done give that ther stranger the slip, jest as well really since I plumb smoked all the baccy and we done drunk the cawfee.’
He looks at Maisie with speculation in his eye.
‘I guess me an you is pardners in a new business now.’
Maisie understands every word he says and accepts her future role resignedly but…

‘I hope the next one is a mite faster on the draw than McGrew,’ she thinks.

View all posts by David →
This entry was posted on 20 November, 2014 in homepage and tagged cow girl dog, cowboys, dave tomlin, nick victor, old west, show down, the dog that came back. Bookmark the permalink.