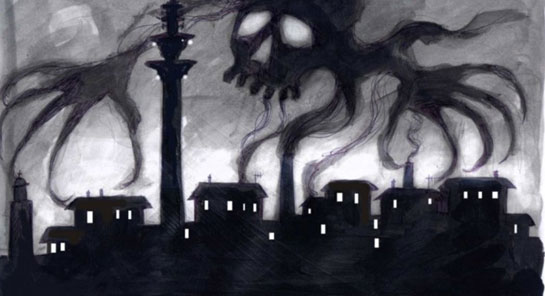 Trapped and tired souls freeze at the wheels
Of their log-jammed coffins;
On the street, a once fragrant woman replaces
Her lost jasmine air with fire, nourishing her yearning lips
As the thick cloud stirs the heat and cold.

She is waiting for the traffic’s tail to thaw and move again,
While under smog’s unyielding cloud
We are battered and condemned.
A man melds with his newspaper that is soaked
With acid rain, while sat upon a cage like bench,

Consumed by rust, he swallows pain.
He grabs the closest comfort; smoke and in a climate twist,
The cigarette becomes the girl who tastes his oncogenic kiss.
A homeless man on sidewalk sleeps, cradled by cold
Asphalt arms, like an orphan without time,

Which moves to judge his destiny and its mysterious decline.
This melancholy silence breaks only when a brighter melody
Shines through, and courtesy and piety like given coins
Restore his broken truth. These lives are dragged,
As illness drags, as a sequela manifests,

Unaware these hostages are a sly kidnap’s unwilling guests.
The rich, the poor, the young, the old, the lost girl
And every man fall beneath the fatal blow of this constant
Slaughter plan. The raped lungs and the shattered brains
Are caved and carved by lethal mist, which penetrates
And kills the air in this breathless massacre’s conflict.
The city is a theatre dressed in dark gas and in ice,
While the lemon glare of lampposts show the bitter sting
Of shocked spotlights.
Daily life becomes a holocaust
As pollutions ghetto reigns,

And we are bowed, imprisoned, lost
Before this grey viscera’s dark rape. 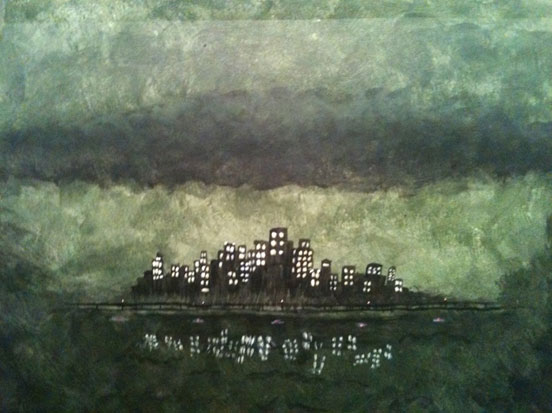 View all posts by Elena →
This entry was posted on 31 January, 2018 in homepage and tagged David Erdos, Elena Caldera. Bookmark the permalink.