Some Thoughts on our Near ­Namesakes

It is the evening before Actually Stop The War vote to extend airstrikes to Syria. We are standing in Parliament Square (where else?) to be harangued by the Stop the War Coalition and their allies. Urged to form up behind a line of high ­vis­jacketed activists, we set out on a nighttime march to the major parties’ headquarters. Clearly this is a demonstration. But of what, exactly? Surely not a demonstration of strength? The crowd is invited to show ‘discipline’, and to avoid giving the media anything to distract from the message being sent.

We are sick to death of this whimpering armada of white saviours that has risen to the top of anti ­imperialist politics, just as scummy formations might rise to cover stagnant water. These grinning idiots (perhaps just returned from their gap year in some exotic ­ sorry, troubled ­ destination) can be seen flogging this or that new socialist paper or chairing meetings to raise awareness about ‘civilian casualties’ and the latest ‘humanitarian crisis’ ­ be it Libya, Syria, or Calais.

They adopt the political standpoint of the ‘extraterrestrial’; of total alienation and, hence, impotence in the face of society’s neo­colonial infrastructure and war machines, both material and ideological. The problems of their bewildered politics are endemic to our culture ­ and, particularly, to the Left. This ‘movement’ does not present a convincing oppositional force. It is better understood as the sick reflection of a society which colonises everything: even the framework within which resistance is exhibited.

On the one hand, we get the Murdoch rags’ rhetoric of ‘swathes’, ‘floods’, and ‘cockroaches’. On the other, we find the Leftist language of ‘innocents’, ‘civilians’ and, worse still, ‘the people’. All of this seeks to homogenise and mystify ­ rendering ‘the war’ utterly abstract. As Baudrillard saw, this war has been pushed on all sides onto a digitised terrain and is being fought with competing statistics. First the death toll of a terrorist attack in Paris and next the death toll of a bombing campaign. All while factories continue to churn out Brimstone missiles and Predator drones, and bloodthirsty geopolitical blocs carve out their territory undeterred.

This extraterrestrialism is prolific and its effects are pernicious.The Stop the War Coalition has been forever tying itself in knots, especially over the Arab Spring, celebrating dictators one minute and applauding their overthrow the next. Those with longer memories recall the same turmoil and bullshit over Ireland, where Trot groups initially supported British intervention to ‘protect Catholic Republicans’, only to later go on to raise funds for the Provisional IRA. Such groups’ actions show little attentiveness to specific situations or processes. Thus, they are unable to intervene effectively. No wonder the central figure of Stop the War’s movement has become Jeremy Corbyn, whose entire political project seems to amount to a guilty, incessant hand­wringing about his own party’s history. These forces are not only doomed to failure ­ they actively depend on it as their means of avoiding confrontation with the system. By constantly confronting themselves instead they keep enjoying the quintessential democratic illusion: that their opinion ever meant anything at all.

Whilst we continue to situate ourselves and operate within this political desert of spectacle and abstraction, there can be no way out of this state of affairs, no way out of our putrid stagnation. We must throw out the imperialist notion of ‘the civilian’ (who must be saved either by intervention or non­intervention), and abandon the notion of ourselves as ‘citizens’, or the execrable ‘99%’, capable of exerting pressure within the system or by reaching a critical mass which, of course, never arrives.

In the search for positive counter examples, we might begin by examining organisations such as the ‘militante gruppe’ (mg) in Germany. Over 9 years of action their targets ranged from military trucks (as protest against German involvement in the war in Afghanistan) and police infrastructure (used in the detention and deportation regime). Their actions resulted in very few convictions and very short prison terms. Alleged supporters were incriminated using unpopular surveillance tactics, inspiring a massively popular solidarity campaign. It is a fallacy that directly disruptive action will inevitably alienate ‘the people’. ‘The people’ themselves are an undifferentiated mass, and can never be won over because they never actually existed.

Confrontation is paramount, because it requires that the allies and enemies of action are clearly and precisely identified. Who is supplying, informing, providing propaganda for a particular mechanism or process? And who are victimised, displaced, abused, humiliated and alienated by its functioning?

It is up to us, firstly, to ignore the ridiculous theatrics of parliamentary debates and A­to­B marches ­ but, secondly, to recognise our position in the existing machine of Empire and the possibilities for attack this position provides. Once this shift is accomplished, the crummy tactical debates that characterise contemporary activism are replaced by questions of praxis.

It is early January 2016. We are back in Parliament Square, where Kurdish dissidents affiliated with the PKK are protesting against UK backing for the Turkish government’s relentless assault on Kurds. It is a small crowd, and for a while it seems like the demonstration, called with almost no notice, will have the same outcome as those we saw in December. We drift away. Minutes later, it emerges that the crowd has done the opposite of what we thought: instead of dissipating, they have moved en masse to the headquarters of the Conservative Party ­ and forcibly occupied it. Perhaps people looking for an alternative to Stop the War will not have to look so far as they seek to redraw the lines of affinity and attack. It has been a day for reacquainting ourselves with our own power, and for finding friends we never knew we had. 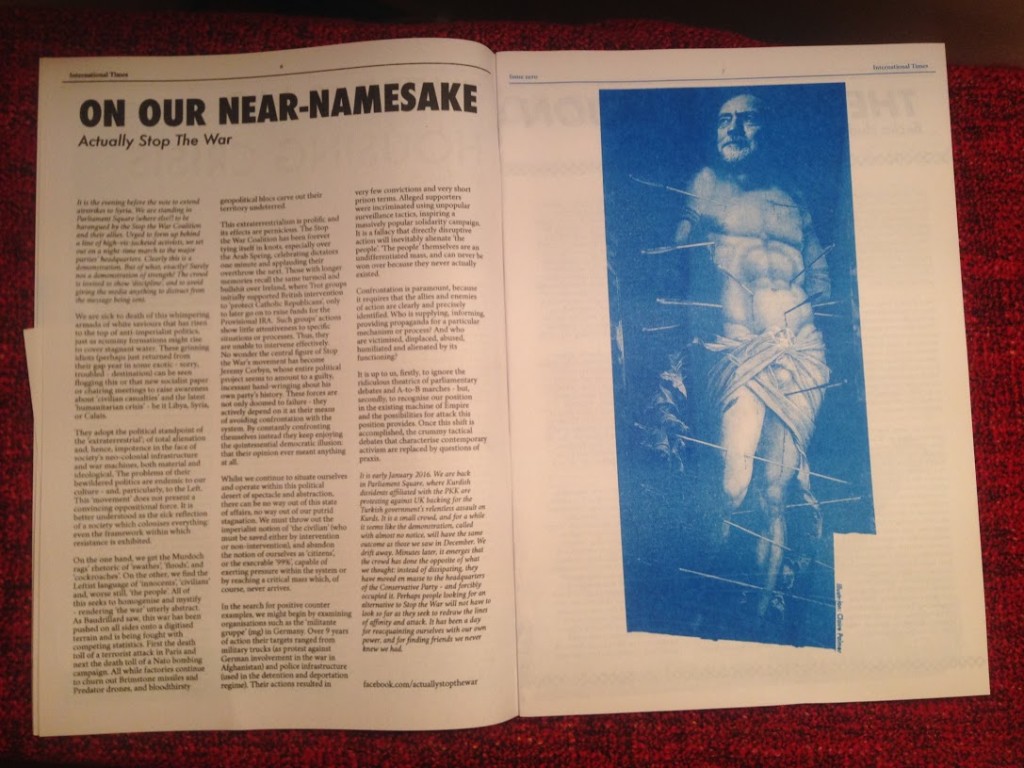