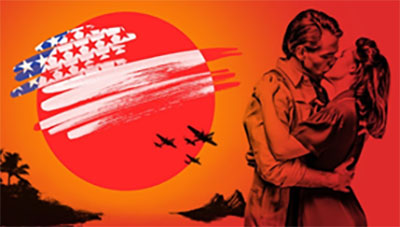 Following my first appearance as one of the Siamese children in ‘The King and I’ in my local operatic society production at the age of seven, I was chosen to play Jerome (son to Emile de Becque) in ‘South Pacific’, so watching Chichester Festival Theatre’s revival production brought back many fond memories. Mine, being an amateur production, was rehearsed over a period of six months, and I attended every rehearsal.  I loved the show, the music, the drama, and the wonderfully defined characters, albeit some of them slightly caricatured both in the writing and interpretation.  All these years later, to watch the streaming version on my TV at home was a treat I was looking forward to.

The audience were masked, as were any of the cast who wandered amongst them, and although there was little social distancing on stage, there was still a sense of a company fighting the odds to come up with a production which main strength is ensemble playing.  A beautifully staged show by Daniel Evans and choreographer Ann Yee presents a ‘South Pacific’ that is low on individual glory but high on accolades for a hard-working, well drilled ensemble. A company of performers working to one common goal, a contemporary vision of a very controversial storyline from yesteryear.

Controversy aside, my everlasting memories of the show are threefold: the wonderful love story between the Frenchman (Emile) and the American cockeyed optimist (Nellie Forbush), the tragedy of Bloody Mary’s daughter, Liat, and Lieutenant Cable’s relationship, and the comedic relief from the likes of Seabee sailors Luther Billis and henchman Stewpot. Two out of three succeeded here.  One, Julian Ovendon’s (Emile) renditions of ‘Some Enchanted Evening’ and ‘This Nearly Was Mine’ sent shivers down my spine, as did Rob Houchen’s (Cable) poignant ‘You’ve Got To Be Carefully Taught’. The missing element was the light relief.  Keir Charles as Luther Billis just didn’t capture the essence of fun required, nor was his singing voice up to the challenge of ‘There Is Nothing Like A Dame’, sadly, one of the disappointments of the show.  Fortunately, Nellie (Gina Beck) and the female ensemble make up for it with their ‘I’m Gonna Wash That Man Right Outa My Hair’, which gets a well-deserved encore.

Like many musicals, it is a show of two halves.  With most of the hit songs in Act One and following a fun opening to Act Two (‘Honey Bun’) – again a misjudged drag from Keir Charles (where was the coconut shell bra, I ask?), we enter the drama and dangers of wartime romance. The difficult change of locations is wonderfully achieved, and the controversial acts of prejudice not shied away from but played with a true sense of the now.  Bravo to all who contributed to the artistic and dramatic success of this Final Act, not least to the wonderful sounds coming from the orchestra above us. So much of Rodgers and Hammerstein’s musical score unfolds to tell the story through the music alone and it is then we truly begin to feel the emotion, passion, and power of two of the greatest musical theatre writers of all time.  The show receives a standing ovation – for the cast, and for R&H.