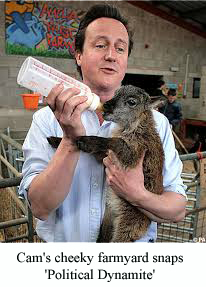 David Cameron has turned up the heat in the election race and turned around a ten point deficit by releasing pictures of himself hugging an orphaned lamb. The PM’s totally coincidental photo shoot splattered over every paper, TV and computer screen in the country was felt so effective by his competitors that it sent them back to the drawing board with political scrambled egg all over their chins. Ed Milliband was first to crack under the pressure immediately relenting on his calls for fairer taxing of non dom residents saying he had been ‘hasty’ to announce such a rash move without first fondling some cattle. Along with this embarrassing climb down he pretended be a Sikh, came out as gay, said he like football and announced that, upon his party winning the election, every UK resident who voted for Labour would receive a free Vauxhall Astra in the post. Nick Clegg, the political eunuch, was also put onto both his back feet by Cameron’s lamb snogging snaps and instantly hit back back juggling some hedgehogs. The stunt went wrong when the cack-handed, lightweight, coalition castrato dropped several of the tiny creatures killing them outright. Cocky Nigel Farge, or Nige to his mates down the pub (or boozer to his mates down the boozer) came out fighting in typical UKIP style by letting himself be filmed pretending that he had something in common with people in Grimsby. The Westminster wideboy then spent nearly three hours at a press conference trying to understand what Joey Essex was saying before giving up with a shrug of exasperation admitting, ‘I might have been able to develop the only independent political platform to compete with the established parties in the last twenty years but I’m not a fucking miracle worker.’ Leading political spindoctor Micheal Mendacium darted his eyes about and cackled, ‘Ha, ha. Dave’s cheeky farmyard snaps are political dynamite but only because UK voters are as perceptive as a can of peas. Turning round a ten point margin by simply posting pictures of yourself pretending to be a mummy sheep prove, without a shadow of doubt, that if Adolf Hitler was running this country and forcing half the population to work to death in concentration camps a good PR consultant could make him the most popular leader in the nation’s history by simply printing some pictures of him letting a guide dog suck his fucking bone.’

View all posts by Ethan →
This entry was posted on 9 April, 2015 in homepage and tagged current affairs, Ethan Harrison, political satire, spoof news. Bookmark the permalink.