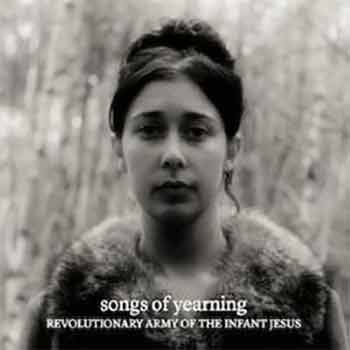 Songs of Yearning + Nocturnes, The Revolutionary Army of the Infant Jesus [CD]

The Revolutionary Army of the Infant Jesus, an experimental music ensemble whose name is a reference to the terrorist group in Luis Buñuel’s film That Obscure Object of Desire (1977), was conceived in Liverpool in 1985. Their first album, The Gift of Tears was released in 1987 and 2020’s Songs of Yearning is only the fourth album they have released, although their have been a number of compilations and reissues over the years. Their music is made by a changing collective of members, and often includes trademark sounds such as ethereal vocals, chants, acoustic instrumentation, field recordings and ambient soundscapes.

Their new album, Songs of Yearning has also produced a limited edition album Nocturnes which is included in initial orders from the Occultation Recordings website. I have to admit I actually prefer this album so would urge you to get hold of a copy of the album soon.

So, I hear you say, what’s it sound like? That’s always been a problem, trying to describe RAIJ’s music, not so much because it’s difficult or strange, just that there are so many things going on in the mix. In the main it’s acoustic, drawing on eastern European folk and Orthdox church chants and bells, but it also occasionally rocks out, and Nocturnes includes their first ever single, ‘I Carry the Sun’, a catchy two-minute pop song with an amazing animated video by R. Brad Yarhouse.

Like all their music it’s enticing and approachable, offering mysterious vocals (often in a European language) and oblique lyrics, set within aural dreamscapes that mix ambient soundscapes, field recordings and emotional layering beneath the surface. Some of the band’s allure is that layering, the sense the listener has of there being more to discover, the allure of occult or spiritual knowledge. On the few live excursions RAIJ have played behind obscuring screens and veils, playing with literal imagery and props that add to the enigma.

This isn’t difficult music, it is emotionally intense, both pagan and sacred, cutting to the heart of the matter by tangent, allusion and zigzag. Its is literary, with lyrical nods and interview acknowledgements to Yeats and Dostoevsky, yet both metaphorical and plain-speaking. It is strange and seductive, familiar yet also unknowable. If you enjoy intelligent new music, you should join this Revolutionary Army right now. 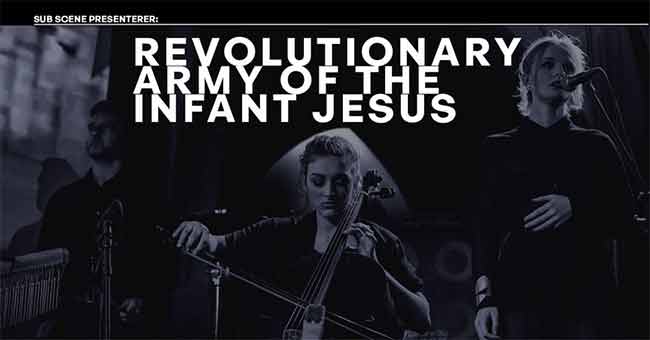 Occultation Recordings are at https://www.occultation.co.uk/

I Carry the Sun video:  https://www.youtube.com/watch?v=5jH5230M69c&feature=youtu.be

View all posts by Rupert →
This entry was posted on 11 April, 2020 in homepage and tagged Rupert Loydell, Songs of Yearning + Nocturnes, The Revolutionary Army of the Infant Jesus. Bookmark the permalink.