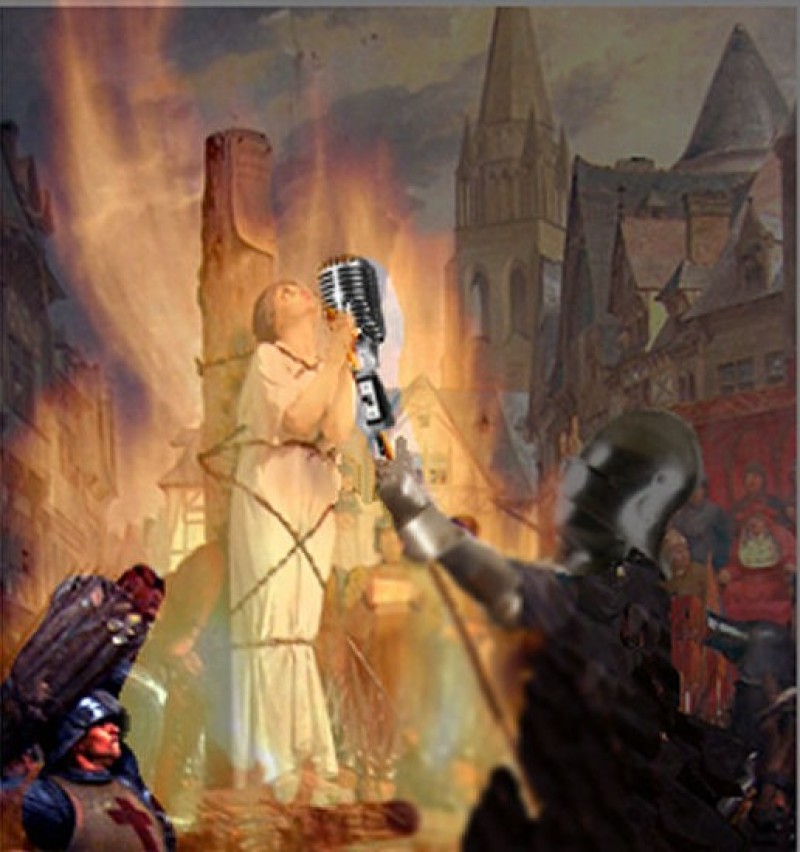 Joan was nineteen when she was murdered. The average age of American military fatalities in Vietnam was also nineteen. War is a widespread form of child abuse. In war the old revenge themselves on the young for the energy, hopefulness and beauty which time stolen from them.

Of course there must be more to it than that. For instance, the Burgundians reputedly sold Joan to the English for 10,000 gold francs. At that time this was a Prince’s ransom. Joan was simultaneously the most expensive agricultural labourer and the most expensive fire-wood that the world would ever see. Such is the way of nations; we know it well. Sadly we are not so familiar with the logic of the miracle.

There is nothing special about the rise of Joan, her victories, her end and her subsequent reputation, she is just an ordinary everyday miracle. If it were not the miracle, the flowers of the dream, the world would long ago have imploded under the pressure of humanities self-hatred.
~~~~~~~~~~~~~~~~~~~~~~~~~

Newsperson A guard, moved to pity ties a microphone to a pole, holds it through the smoke and flame.

Joan When we come …

When we come to our senses,

That we come to,

This turbulence of sensation,

Is the Holy Ghost:

Yet unique in everyone.

At the hinge point,

Only the air moves

And the shadows of the brown weeds

Swept round their stalks

And round the soldier’s boots.

Only the sound of the wind,

The applause of ascending doves

At the hinge point

The details are irrelevant.

Holding a broken shard of crystal to my eye,

Fascinated by the power

Of the faceted lens

To sift the fear

Stitches holding me in the shape of my life

I realised that I was

A version of myself,

A single figure from

A library of images,

Any one of which would,

With the slightest effort of will,

When I put the crystal down,

But would not cease to exist.

I saw that within my mind anything could be known.

That there was something about the world,

Which gives it completeness.

How is it possible

Gilles In the wind,

This is the beginning of modern time.

A time with its own appetites,

Modern time is not neutral:

It has a side of its own.

This is the time that conquered space,

As an infinite source of unspoilt dimensions.

This is a time that connects what it distances

A time which has a geometry of its own.

From now on things will talk louder than words.

Not just the gun’s thunder but a flood of

Made mouths will dumb

Of their impoverishing hymns.

Women Chorus In our daze,

Men Chorus In our daze,

Women Chorus In a railway train,

Men Chorus On a bridge,

Newsperson Or in Rouen Market Square,

In the place of public burning,

Gilles The groping heart of fear and cruelty

At a blazing shadow

By the shadow of a chain.

Chorus At noon in the hot sun

The side of the cathedral

Prophets We were alive before we died.

1st Prophet Across the bone and muscle

3rd Prophet Of a sea which knows more of

2nd Prophet Than we dared suspect.

1st Prophet A sea which knows more of us

Than we dare know

Prophets (together) Of ourselves.

1st Prophet At our best …

2nd Prophet At our best,

1st Prophet Perfectly what we were

3rd Prophet To gnaw into the sinews of time

2nd Prophet We have become

Chorus (to JOAN) Your deology’s wrong

You’re right except you’ve got the problem inside out,

Or back to front, or (hesitates) inside out.

Things have got a little mixed up in your mind.

What these trained eyes can see

Is that we have a problem with our ideology.

Of the world’s chain shroud.

The strength and the perfect terror

Of the urgent lies

The loss and pain in the making

Of strength and weakness,

Gilles And the loss and pain in the breaking of it.

Joan I am glad

Joan & Gilles That none of my different parts

Know how to feel the same.

Joan The idea of the knower and the being known

Is neither straightforward nor pretty.

It makes, of life, a mirror maze.

Easy to walk into.

And the twins make twins.

Bouncing off the plate glass,

Trying to learn to recognise reflections.

Women Chorus Which makes everything better

Men Chorus Which improves the future

Gilles So nothing can stand against progress?

Newsperson Usually we improve things we already have

But for the future —

Chorus For the future

Newsperson    For the future

We are willing to make an exception.

We are prepared to sacrifice everything.

Gilles They are waiting for you.

Tweet
This entry was posted on 5 September, 2012 in homepage, Uncategorized and tagged bluebeard, gilles, joan of arc, joan of now, kicking the English out of France, Mike Lesser, rise of nationalism, state murder, The Maid of Orleans. Bookmark the permalink.