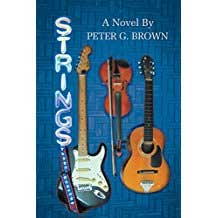 At its core, Peter G Brown’s Strings is a pitch-perfect account of the internal tensions in a 1960s British psychedelic rock band. Formed in the summer of 1967 by a group of university students in the English South Coast town of Elmstow (hint: Brighthelmstone was the ancient settlement preceding Brighton), the members of Dandylion follow the classic struggle common to all bands not just for recognition, but for mere survival.

Where the book succeeds especially well is in recreating the sense of a nation that had yet to be fully modernised and which was still struggling with its various social, structural and cultural handicaps – class, race, education, ‘slum’ housing, gender inequality, economic divisions, sexual freedom, anti-intellectualism, xenophobia and – for young people – stultifying boredom. Escape from that ennui often famously involved drugs, sex, music, art, political activism, ‘underground’ publications such as IT (this august organ is name-checked in the book 3 times) and the many ‘happenings’ at which all these things would come together in spontaneous bursts of creative energy and psychonautical exploration. Save for a tiny minority orbiting the hip scenes in London, life for most people in Britain in the 1960s was a drab affair. All the things you’ve heard were true – terrible food, appalling urban deprivation, a creaking public transport system; racism, homophobia and misogyny on an industrial scale, and an enervating ordinariness that older generations – bafflingly – sought to preserve. If this is the golden age that the old-fart Brexiteers want to return us to, we are indeed doomed.

Strings is long. At just over 800 pages, most of it is an exhaustive Jamesian exploration of the central characters’ interior lives – their unconscious mapping of their social and cultural terrains, and their often fractious struggles to understand and be understood. A lot of the book is hard going. One can’t easily escape the conclusion that a judicious structural edit would have lightened the intrepid reader’s load. There are several passages that are simply poorly written: with the best will in the world, there is no other way to say this. And yet, there is much to enjoy and admire.  Two bravura extended passages, involving Brigit and Claudia – the book’s central female characters – respectively are pulled off to wondrous and devastating effect. If the whole book had been so tightly constructed, this would be a 5-star read.

One assumes that Brown is writing from experience. The internal struggles the characters engage in are too authentic to be imagined. The usual stuff: drugs, sex (too much or too little), egos, personal differences, musical differences – various factions pulling in opposite directions; the folly, the vaulted ambitions, the scheming and manipulation, the mutual distrusts, the lack of money. This stuff is timeless, and scuppers 90% of all band collaborations. This is also my experience. After 40 years of playing in bands, this still confounds me. What seems so simple – the desire to create and spread joy – rapidly becomes bafflingly complex. All of this Brown handles with a keen eye for observation and detail, and is one of the book’s greatest strengths. This, and the oppressive atmosphere of bourgeois life in 1960s Britain, with its emphasis on spurious respectability and a misplaced sense of propriety, its insistence on the inevitability – indeed, desirability – of submitting to the 9-to5 drudge as expression of some kind of existential authenticity. The blood runs cold to think of it.

Dandylion are a psychedelic pop band with a difference. Colin, the central anti-hero, plays the violin. This was unheard of in pop groups in 1967. Later, Flock in the U.S. and Curved Air in the UK would feature a violinist and built their mystique accordingly. Psych would later morph into prog, with its emphasis on conservatoire training, complex arrangements that often spoilt the fun by being too intellectually demanding, those tricky bridges and motifs (see Yes, Genesis, ELP etc) with their time signatures that only ‘real’ musicians could play. Yet Colin is a drag – moody and insecure, indecisive to the point of maddening distraction, and hopelessly pursuing his romantic obsession with the remote, chaste and supercilious Claudia. This is one of the book’s central motifs: Colin is alternatively drawn into the rock and roll lifestyle and wracked with guilt and confusion as a result. He travels inexorably towards the damnation that follows the conventional middle class route to obscurity – a non-entity, in Claudia’s ultimately damning appraisal. It is here, in detailing all the grief and confusion endemic to a relationship founded on misplaced optimism and stoicism that Brown is on surest ground.

Despite itsflaws, Strings is a highly rewarding read. It brings vividly to life an era long passed, in which several promising babies were consigned to the cosmic plughole with the tepid water of mainstream social development. European and American rock music was for a time one of the most significant cultural projects of the late 20th century – the music of a generation enlivened by its possibilities, yet ultimately betrayed by the excesses of its central protagonists. For a while, though, it was fun. Strings celebrates that admirably and is to be applauded for its ambitions. Finally, it lives in the mind after reading. This is one of the essential tests of good literature, and here it achieves admirable success. Recommended.

Author, singer-songwriter, dreamer, drifter, environmental campaigner and house-husband Peter G. Brown, after being unable to publish his first novel in the 1980s due to the closed attitude of the publishing industry, decided to self-publish his second novel Strings with Xlibris. He has also released seven albums (see www.lemang.com) and spawned three (now grown-up) kids, and currently lives in Malaysia with his osteopath wife, musical partner and mother of 2 of the kids Markiza.

Tweet
Tweet
This entry was posted on 28 March, 2018 in homepage and tagged Keith Rodway, Strings by Peter G Brown. Bookmark the permalink.