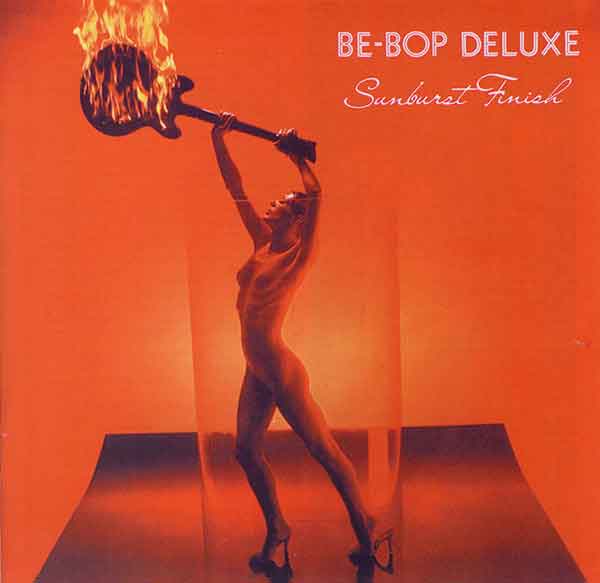 Be Bop Deluxe are one of those bands who never quite made it: they are on the music map but were never huge. They were an uneasy mix of glam rock and prog-tinged rock with the emphasis on rock; Bill Nelson was always happy to play a guitar solo if he could, and always seemed to be chasing last year’s musical fashions, something he continued to do with his post Be Bop deluxe band Red Noise (who issued a new wave influenced album, Sound-on-Sound, in 1979), and in his solo work which mixed and continues to mix ambient noodling and instrumentals with occasional forays back into rock or electronic song formats.

But what of Be Bop Deluxe and Sunburst Finish? The science fiction cover, a female nude in a Perspex tube, holding a burning guitar aloft is not an enticing image; it reeks of sexism and rawk, something that the music does not fulfil (the rawk, I mean). The music is mostly slightly awkward, over-extended and rather earnest mainstream; only ‘Ships in the Night’ is particularly enticing here, despite its tired reggae appropriation. ‘Life in the Air Age’ is okay, too, but much better live as the title track of a later live album. The rest, I’m afraid, is pretty mundane and forgettable.

Accompanying the original album are a couple of single versions, a new stereo mix of the whole album, and some alternate or demo versions of some songs. The album versions are much better than these other versions, beefed up and suitable produced, but the new stereo mix doesn’t sound much different to be honest, even on my hi-fi, let alone the portable CD player in my study. If you go for the deluxe box set you get a third CD of some nifty live BBC recordings (In Concert and a John Peel session) and a DVD of a 5.1 surround sound mix along with a promo video and the band’s appearance on The Old Grey Whistle Test, but it’s a hell of a price jump from the double CD to the box set.

It’s hard to see how Be Bop Deluxe moved from the crisp, melodic music of their previous album, Futurama, with its intriguing homage to Cocteau, it’s dreamy ‘Music in Dreamland’, eerie ‘Love with the Madman’, and the outstanding single ‘Maid In Heaven’ (which in hindsight seemed to pre-date new wave), not to mention the soaring ‘Sister Seagull’ which follows it on the album, to making this music. Perhaps it’s unfair to expect musicians to read the future and suggest that had they had their ear to the ground they might have picked up on pub rock and its evolutionary trajectory as punk? Perhaps an EMI budget, Abbey Road recording studios and critical acclaim had gone to their heads? Either way I’m afraid this is disappointing, lackadaisical rock, and a surprising choice of album by Be Bop Deluxe. 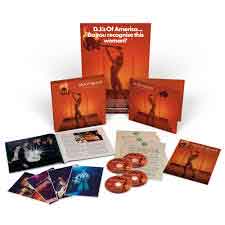 View all posts by Rupert →
This entry was posted on 20 October, 2018 in homepage and tagged Be-Bop Deluxe, Rupert Loydell, Sunburst Finish. Bookmark the permalink.

One Response to Sunset Glow