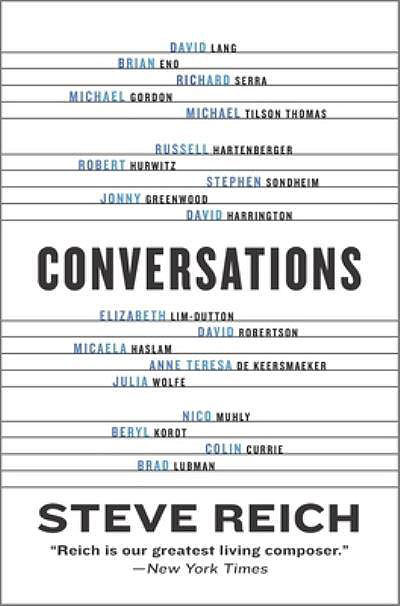 Many years ago, BBC Radio 4 presented an afternoon play about the early years of Steve Reich and Philip Glass, when they were making ends meet doing furniture delivery, plumbing, and studio labour for minimalist sculptors. Presented as a riff on The Odd Couple, Glass was Walter Matthau – messy and laidback – while Reich got the Jack Lemmon role  – uptight and stressful. It was entertaining and had the ring of truth – certainly it backed up the public impression gained from numerous interviews – Glass relaxed and charming, Reich snarky and preoccupied with who got there first.

But that was then – now they are both advanced in years and both preoccupied with securing their place and status in the pantheon. Glass’s autobiography came out in 2016 and sought to stake his claim – like a career resume at the start of a Ted talk – but there was something cold and unrevealing about it. Meanwhile the box sets marched on – symphonies, concertos, etudes for piano, sonatas and interludes for solo violin –  repertoire that seemed strategically written to be programmed or recorded alongside the classical canon – or just measured up against Bach or Beethoven.

Reich’s bid comes along now – a lockdown project that is designed to show him at his most avuncular and chummy, notwithstanding that it sets itself up alongside Craft’s Conversations with Stravinsky.

Rather than one interlocutor, Reich set up Zoom conversations with a range of figures from the world of music – the list covers a lot of bases from the classical and academic world through pop to Reich’s wife and other close collaborators. While less exhausting than the name dropping evidenced in the index to Glass’s book, it nevertheless does an efficient job of triangulating and affirming Reich’s relevance and importance.

The second interview is with Eno amd provides an interesting and close account of the production and reception of It’s Gonna Rain  – giving both parties room to contribute and petering out only at the end when Reich wants to talk about U2. Although there is a generous amount of mutual backslapping throughout the book, it is actually well structured in that what appears to be a haphazard ordering of personalities turns out to be a sequence of conversations which moves through Reich’s corpus of work more or less chronologically. Richard Serra comes after Eno and talks some more about the early tape and process works. Reich’s wife, Beryl Korot, comes in toward the end to discuss The Cave and the other video works which they collaborated, followed by Colin Currie talking about recent commissions and performances.

The central interview in the book is in some ways the most surprising, but also the most affecting. Steven Sondheim is not a name which one readily links with Reich’s, but they are linked by Reich’s mother, June Carroll, who was a name in musical theatre, and a shared preoccupation with the use of the rhythms of spoken language to shape melody.

The final takeaway from the book might be an exchange with Currie where he acknowledges that his group are in awe of the classic Reich recordings, but committed to interpreting Reich’s work in their own way. Reich replies “Any music that can’t work in a number of ways will shortly disappear”.  The Philip Glass Ensemble grow ever older, and have lost key members such as Jon Gibson – is Reich having the last laugh after Glass stole his band?

Tweet
This entry was posted on 7 May, 2022 in homepage and tagged Conversations, Steve Reich, Stuart Riddle. Bookmark the permalink.