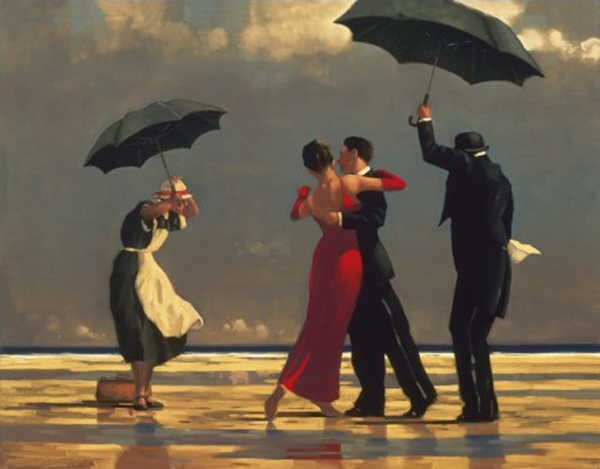 is something I doubt
I could capture. The kind of guy
who makes iconography
of long coat and Alain Delon hat
is the kind of guy who’s lean, hard,
limbs angular, the life he’s lived
etched on his face like the closest
of shaves. Me, I’m rocking the short arse
with beer gut and hangover look
and if anyone’s filled art galleries
with that, it isn’t Vettriano.

Nor can I see it going over well,
asking my better half to drape herself
over me or a card table or the bar
in the kind of wispy cocktail dress
that enfolds the embonpoint
and leaves it at that.

Nah, I’d be the guy dancing on the beach
as the soft-focus Hollywood rain
escalates to monsoon, the two
bums rounded up at the pier
dropping the umbrellas and legging it,
the car sinking to the hub caps
in the sand, windows open,
tonneau cover leaking.

Neil Fulwood has published three collections with Shoestring Press, ‘No Avoiding It’, ‘Can’t Take Me Anywhere’ and ‘Service Cancelled’. A collection of political satires, ‘Mad Parade’ was published earlier this year by Smokestack Books. Neil lives and works in Nottingham.

Tweet
This entry was posted on 17 September, 2022 in homepage and tagged Neil Fulwood. Bookmark the permalink.