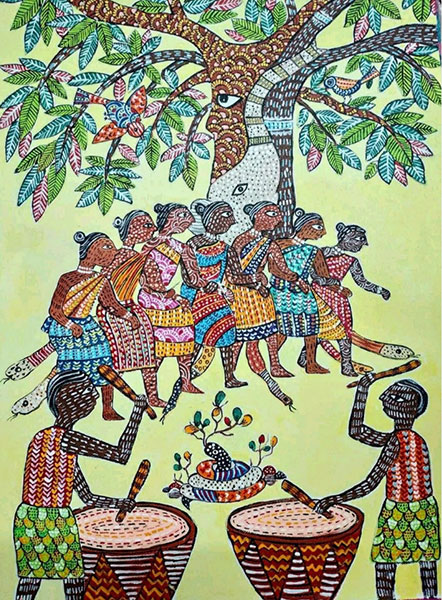 The banned feet’s
Beating and thriving the roots of rhythm in the narrowing community yard
The power jugglers cannot hear the ‘We’s’;
The lands fall apart; the gravity cannot hold;
Mere mutiny is loosed upon the Mother,
The hunger-stick inflation tide is loosed, and the vanity
Off cremation is drowned;
The statesman lacks all conviction, while the weak
Are full of lethal summon.
Surely some rebellion is at land;
Surely the advent is at land.
The advent buzzing! Rumbling pebbles down the hills
When a thundering light strikes thy crage, O Mother!
Flaring up the impenetrable woodland
A shape of smoke musk floated with an alluring flames bust
A version of tails turning reality, natural calamity!
The rolling river of furies separating the chest of Mother
A shape with ten heads and a body of divine,
A fearless gaze and ruthless smile,
Is moving its foot, while all about it
Spindle heritage of indigenous land, Washed.
The sharp plight gaze back; the darkens drops again
Now I know
The dominant bleach of deities needs
Is nil.
Our Ravana is awake,
Our deity,
Our priest
The centuries of curtained sleep
Where documents handouts rules over our cultivated land
My ancestral land,
Marked by the whole forest and its breeds
Are not evident documents for my stay?
As I lack the papers of the stately identification.
Who came first my trees a century old
Or the papers which never reached us
As we are mountain man
Distanced by We’s.
What rough nobs, its sun comes round at last,
Sagging feet towards the woodland to rejuvenate
The advent souls
The Asura’s will thrive again!

Glossary:
Asura’s – The word ‘Asura’ directly translates as Demon in English. The Asura’s tribe is one among the marginalized and endangered tribes situated in Gumla district of Jharkhand, India. Besides Jharkhand, members of the tribe live in pockets of Bihar, West Bengal and few other states of India. Isolated, deprived of basic livelihood amenities this tribe is not just abject poverty, they also have to deal with social stigma. As this tribe considers itself to be the decedents of Mahisasur(a buffalo demon in Hinduism). The stately governance, socio-economic and educational parameter all turns null when touches the ground reality.
Ravana- Ravana is considered as a demon in the Hindu epic Ramayana. But few tribes in India worship Ravana as there deity.
We’s- We’s here refers to “We the people of India…” (Extract from constitution of India).
Summary: Voicing the indigenous space. The poem deals with the theme of ‘Ulgulan’. The word means ‘Great Tumult’. The rebellion sought to establish the rights of indigenous people over their resources which were being snatched away from them by people in Power. This poem is themed upon Asur tribe in particular. The treatment of ‘Outsider’ is given to them. Their finger counting population needs to be heard and read about worldwide. The poem basically deals with their struggle and rebellion for identity and existence among the mainstream society.
Twitter handle- https://twitter.com/_Sonali_Gupta__?t=yzh3RPaCFZ272yMgwfyhFw&s=03
Facebook- https://www.facebook.com/profile.php?id=100004868226417

Tweet
This entry was posted on 10 September, 2022 in homepage and tagged Sonali Gupta. Bookmark the permalink.