The dominance of the cartoon in a declining civilization 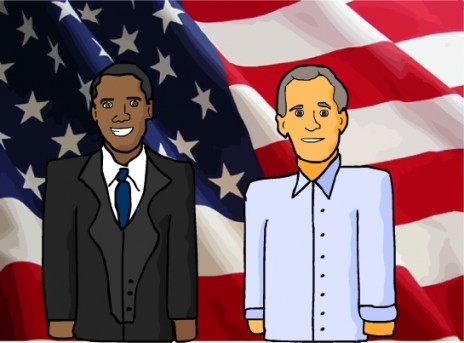 Here is the function of a cartoon: it can extol and pay lip service to qualities like freedom and imagination and courage…and yet these assertions mean nothing because, well, it’s only a cartoon talking.

The most obvious examples are television news anchors and mainstream pundits. They automatically diminish the power and the authenticity of whatever they refer to.

There are many other cartoons. You’ve met them and seen them.

The whole society is embracing the Disney view of reality. Of course, the wars we engage in deliver real bullets and bombs and people die, but that’s mitigated by the fact that, for most of populace, it’s happening on television and not up close and personal.

There is another version of the talking cartoon: the utopian.

He is spinning delightful visions of collective paradise, in which a widespread transformation of consciousness is linking us all together with rainbow special effects.

The utopian cartoons seem to be quite eloquent, but if you take the time to break down their assertions, you find the generalities fall apart in your hands.

Sometimes you can watch a cartoon espousing individual freedom arguing with a cartoon who urges collective unity. This is quite a treat, like eating several flavors of popcorn at the same time.

The cartoon isn’t merely one level removed from life. It’s a composite of many layers piled on top of a distant memory of the real thing.

Viewed from one angle, the Matrix is a machine that manufactures endless numbers of talking cartoons.

Public relations comes into play here as well, because that craft involves calculating the public response. You don’t talk until you believe you can predict the reaction, and then you tailor your words to elicit it.

Cartoon-speak. It’s devoid of life, but its purveyors say, “So what?” It’s Pavlovian. It’s looking for dogs who drool when the bell rings, expecting food.

We have cartoon Presidents. Eventually, they all sound like their programming is wearing out. Then it’s time for a new election and a new leader.

In 1958, writer and painter Brion Gysin invented what he called the “cutup.” Using newspapers, scissors, glue and tape, he cut articles into pieces and arbitrarily rearranged the words. These days, if you Google “cutup machine,” you’ll find several random generators into which you can paste text and have the rearranging done in seconds.

To illustrate the cartoon nature of Presidents, here is a typical canned statement about war from Obama, followed by its cutup, and then one from Bush and its cutup. I recommend cutups as a way of getting a grip on the true nature of cartoons and the operations of cartoon-speak and public relations:

Obama quote: “When we send our young men and women into harm’s way, we have a solemn obligation not to fudge the numbers or shade the truth about why they’re going, to care for their families while they’re gone, to tend to the soldiers upon their return, and to never ever go to war without enough troops to win the war, secure the peace, and earn the respect of the world.”

Same Obama quote, cut up: “When war never gone about solemn our peace to to going to and the enough upon for numbers harm’s the win and while the have we secure ever to why obligation young and war the to fudge women respect troops their their or way world the to they’re truth a send the go tend they’re not men earn without soldiers care the into of to return families shade we”

Two interesting and telling phrases emerge in the cutup: “fudge women respect” and “they’re not men.” I didn’t insert them. They appeared after the random generator rearranged the quote. “Families shade we” is also suggestive of complete unconcern about the relatives of troops. Then there’s the ominous “harm’s the win.”

And now, on to Bush:

Bush quote: “A commander in chief sends America’s sons and daughters into battle in a foreign land only after the greatest care and a lot of prayer. We ask a lot of those who wear our uniform. We ask them to leave their loved ones, to travel great distances, to risk injury, even to be prepared to make the ultimate sacrifice of their lives. They are dedicated. They are honorable. They represent the best of our country, and we are grateful. To all the men and women in our military, every sailor, every soldier, every airman, every Coast Guardsman, every Marine, I say this: Your mission is defined. The objectives are clear. Your goal is just. You have my full confidence, and you will have every tool you need to carry out your duty.”

Same Bush quote, cut up: “A a to the are commander lot make men clear in of the and Your chief those ultimate women goal sends who sacrifice in is America’s wear of our just sons our their military You and uniform lives every have daughters We They sailor my into ask are every full battle them dedicated soldier confidence in to They every and a leave are airman you foreign their honorable every will land loved They Coast have only ones represent Guardsman every after to the every tool the travel best Marine you greatest great of I need care distances our say to and to country this carry a risk and Your out lot injury we mission your of even are is duty prayer to grateful defined We be To The ask prepared all objectives”

The phrase “airman you foreign” jumps out. There is also the slightly more cryptic “Your out lot injury we mission.”

Understand, of course, that these wars are all undertaken for very different reasons than those given.

In the Matrix, it’s standard operating procedure to abstract cartoons from actual values and present the fakes as if they’re the real thing. This puts communication on a level where meaning doesn’t matter. It’s all phony, as if Scrooge McDuck is reciting the Declaration of Independence or Mickey Mouse is citing grave consequences of the federal government shutdown.

I once asked a national television reporter how it felt to interview politicians. His answer: “It’s like being in a fantasy theme park. The politician knows that I know he’s spouting nonsense, but he doesn’t care, as long as I go along with the ruse and pretend it’s real.”

For a glimpse behind the cartoon, here is a statement George W Bush made in 1989, to the Midland Reporter Telegram, five years before he won his first election and became governor of Texas: “You know, I could run for governor and all this but I’m basically a media creation. I’ve never really done anything. I’ve worked for my dad. I worked in the oil industry. But that’s not the kind of profile you have to have to get elected to public office.”

When I write about consensus reality, and I often do, I’m referring, among other things, to its cartoon-nature, and the acceptance of information which is supposed to be coming from live sources, but which is actually emanating from PR personae and roles.

You can search a slew of articles I wrote a couple of years ago on the Magic Theater. This was a project I developed in which people would spontaneously act out roles in conversation with each other.

During the two live seminars I held in San Diego, I noticed that the attendees frequently fell into cartoons. That is, they not only spoke in their roles (king, doctor, CIA agent, intergalactic cop, etc.), but, without planning to, they naturally imbued those roles with all the madcap qualities of cartoon characters.

One of the jobs of artists is to expose the ubiquitous scam.