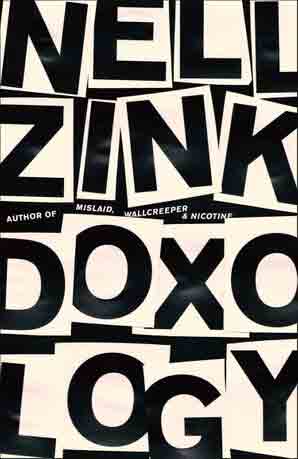 Nell Zink’s new novel, Doxology, starts with an amazing evocation of downtown Manhattan in the 1980s, its broke and broken inhabitants, its dirty streets, its vibrant and inventive music scene. Joe, Pam and Daniel are a group of friends doing their best to survive and make music, as well as rebel – especially Pam who has run away from her rich family to embrace city life and near-destitution in some kind of punk rock feminist statement.

Her personal and musical revolution is short-lived, however, as is the band, , when she becomes pregnant, a situation Pam and Daniel deal with by employing the semi-autistic, not to mention naive and accepting, Joe as their childminder. This kind of extended family situation seems to work for all involved and allows all each to scrape some kind of living and have some kind of role in life. Baby (later toddler) Flora most of all.

It’s soon disrupted, however, by the surprising success of Joe’s solo single, which catapults him to an awkward kind of fame where he indulges in the many indulgencies offered to him, not least sex and eventually extortion and theft from a damaged clinger-on-cum-groupie who is complicit in Joe’s death. Oh and 9/11 happens too, and what I assumed was a rock’n’roll novel, at this point turns into a family saga, an old-fashioned inter-generational story. Group hugs.

Pam has to introduce Flora to her parents, but finds that her uptight mum has become an earth-mother since she went away and that her father is basically ok. Hugs all round. And somehow post-9/11 the revolutionary and anarchic Pam decides its better for Flora to stay with her grandparents and go to a private school nearby, which allows her (and Dan) to ‘divide their time’ and still spend time in New York where she is a vague part of a vague software development company.

Later on the book focusses on Flora, who becomes an eco-warrior of sorts, and spends time interning for the Green Party before having a serious relationship with a political agitator of a different viewpoint, not to mention a fling with a young dude she meets whilst travelling. Guess what? She gets pregnant and it eventually turns out that older dude is sterile and he’s been having a longer-term affair anyway. Everything is going haywire, history is repeating itself, her mum turns out okay in the end too (especially financially, as the software bears financial fruit in the end), and Flora gains an inner strength.

I am really not sure what Doxology is about. It flags up so many ideas, then abandons them; creates believable and interesting worlds then walks away and goes elsewhere. Everything gritty and interesting is eventually smoothed out and made anodyne, all the trauma and wildness is ignored and put aside, making it seem worthless. And yet rebel Pam is much more interesting than newly rich and social Pam; nerdy, well-intentioned yet confused Flora is much more interesting than got-it-together Flora; and earth-mother and grandma Ginger is just a new age cipher. The best character in the book is actually New York, whilst the second best, Joe, gets needlessly killed and simply remains a fading memory for the rest of the story.

The word doxology is defined as ‘a song of praise to God’, which is kind of weird and makes no sense here, unless Zink has some vague idea that everyday life is a sort of human praise to itself, or to a deity not named or even hinted at in her book. The blurb says the book is ‘a touching invocation of humanity’s goodness’, but that’s weird too because humanity in this novel doesn’t seem to possess much goodness at all. Zink’s characters are as crazy, egotistical, confused,stupid and as downright nasty and misguided as those in the real world around us. Zink’s prose is sometimes lively and energetic, but I really wished I hadn’t wasted my time reading the second half of this reactionary and disappointing novel.

View all posts by Rupert →
This entry was posted on 19 October, 2019 in homepage and tagged Doxology, Nell Zink, Rupert Loydell, The Foresight Saga. Bookmark the permalink.