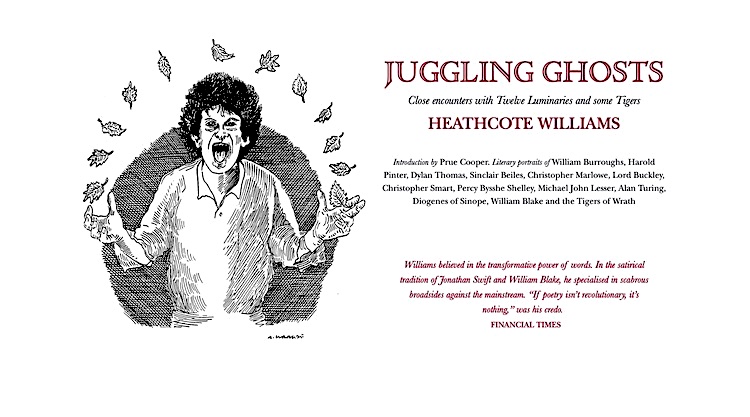 Kubrick and Welles made twelve films. Heathcote Williams,
Many; as actor and poet, where every line ‘cinemas’
Idea, image, thought, experience and reflection,
As is proved in these dozen pamphlets in which every
Recollection sees far

Into both future and past, where we re-encounter
The writers who peopled the places where this Poet-Sage
Claimed the stage, that he took everywhere, as John Henry
Was left behind to cast Heathcote, seminal activist,
And inspirer, but adventurer first, for the page.

Juggling Ghosts as a set, is a proper love project.
Produced by John Henry Heathcote Williams’ sister,
Prue Cooper, his daughters China and Lily, and
Richard Adams of the Open Head Press, the heart’s bared,
As it forms a tribute to him through those he apprises,

As well as celebrating the writing which five years on
Gives death dare. Beautifully bound, we can read the poetic
Essays H scored across his favourite subjects for portrait:
Pinter, Beiles, Burroughs, Christophers Marlowe and Smart;
Diogenes of Sinope, and Dylan Thomas, Percy Bysshe Shelley,

Lord Buckley, each addressing the divine information
That helps to make the ignorant more book smart.
And heart and mind smart as well, as with the visionaries,
William Blake and Alan Turing, each one seeing signals
Through some ecstatic light screen, and then, a beautiful

Tribute to his friend, the much missed and still greater
Mike Lesser, a backroom boy who house painted each place
He passed through with both love and wild schemes.
As Prue Cooper does here, for her brother John, the love
Leaping between words as she fills in some of the formative

Forces for us, such as his background in the Law
Which, with severe joy he subverted, to keeping bees
With Monks as a post teen, through to his middle age
Courting of wasps, and the trust that he placed as their
Function and noise, buzzed through the subsequent letters

That he continued to write while still breathing
Until that awful 2017 set full stop.  But now, this treasured
Collection restores the Williams words and perspective.
We see William S. Burroughs in London, heroin cure
In his sights, exchanging the spike for the morphine laced

Breathe-eeze cough mixture, and watching Fellini
With Heathcote as the Westbourne Grove bus 23
And its number gives each pen-man their own pause
For fright. Instantly one lives in the world that John Henry
Heathcote Williams thrived in. This is revealed in the essay

On Pinter forming volume 2 of this set. In which
The established Harold, half Hirst, protects Heathcote’s
Proto-Spooner, across the No Man’s Land of endeavour
In which changing the stage sets language aflame
A la Webster, and makes the two titans of almost

Shakespearen scope, both well met. And so, H champions
H, who here hands back the favour, alongside
Private details of Harold’s son Daniel and his first wife
Vivien. We get to see the greatest writers up close
And primed. None more so than with Williams watching

Dylan Thomas with his father, the nine year old observing
DT  Dt-ing, two years before breath’s expense. And yet Thomas’
Richness of voice surrounded Heathcote’s own honeyed
Vocals. Their music and precision underscored his ‘eco-logic’
Quartet, of Whale, Elephant, Dolphin and Car:

Have you ever read  or heard the recordings?
To do so will soothe you before the savagery is beset
By the elegance of his thought and the artfulness
Of his language. Which he took from Marlowe and Shelley
And perhaps in part from Sinclair; as his piece on Beiles

Has a sense of morality to it, detailing a mind pushed through
The madness of planting tea leaves in the Sahara, to setting
Arcane window boxes; to dying with all the experience
Of and in a whore’s arms, shows such care – while melting
The heart as Beiles was also the extreme H. avoided.

And this was a wild boy, whose own exploits often stunned.
But Sinclair’s poems were spells summoning new invocations,
For the Olympia press and pre-Gysin, what Burroughs
Then Bowie had begun. Williams’ report is detached,
But also persuasive. We come to love Beiles, victim as he was

To life’s charge; as was Marlowe of course, Literature’s
Greatest missing link, aped by Shakespeare, and as good
As murdered by Elizabeth I, as H has it; a gay James Bond-like
Martyr who weaponised writing before his vision was scorched
By Robert Poley’s poker; his eyes exchanged for the fire

That met Edward II’s arse, and fell from Deptford
Into the Thamesian Styx, and death’s barge. Lord Buckley
Comes next, another innovator, whose language was music,
From the ‘flippishere’ onwards, into the Nazz and high hip.
Not so much a benchmark, as the bench on which all writers

Rest on. His work launched and ignited Williams’ own:
Words as ship. One starts to see the theme through each text.
As Williams leases language from the dry scope of others
We can see how he saw it sail through these men.  And others,
Of course, but these are his twelve disciples to the Christ

Of creation, whose privilege H. defends. As did Christopher
Smart wising up around Tyburn, his ‘visionary dementia’
Disturbing surface, to search for life’s pearls while lit
By sea-lanterns.  Metaphor’s madman, his too, was a soul
Heathcote stored then set free. The inference of influence

Breaks through, as those who beget, breed successors
Who in turn pass the fire that can even singe sea. Smart
And Sinclair were alike, both prone to breakdowns,
As was Heathcote, Prue tells us, as surely minds like these
Crave release. And yet, for each bind, a book that sets

The world turning, and within each book a poem
That becomes its own grail; something for which
We all search, leading us on towards answers,
While the writers that Heathcote has chosen
Shape quest and question in which, as with Beckett,

We get to better ourselves as we fail. Shelley in Oxford
Follows on. Heathcote’s next totem. His erudition and fire,
Like mercury flying fleeting beside Lord Byron’s clubfoot.
As Corso is quoted; ‘Shelley was a sharp Daddy for all,’
And this is how Heathcote frames him, not the chained,

Shelf-stained classic, but the piss and the plenty that pure
Poetic vision first took. His Romanticism not in and of itself,
A style, but rather, a founding spirit; a means to set the world
Moving, passing poetry into health. Heathcote Williams thereby
Became all these men and lived his last years in Oxford.

His brain room in St. Bernard’s touched the tall towers
And the spires too, of the verse which has inspired us all,
As what he details here becomes brickwork, or stones
That shape the colleges  and cathedrals from which Percy
Bysshe first found worth. Mike Lesser helped spring

George Blake. He funded IT, worked for NASA. He wrote,
Worked, and drank with abandon. He frontlined CND.
He was one hell of a man, battling his own heart and soul
Demons, as well as part heaven. He looked for love ceaselessly.
Heathcote said once, ‘He was glum because he missed his chum.’

Mike’s death marred him. He left two years later, eerily on
The same day.  July 1st. The two friends joined in departure.
Mike’s was willed. He had woken knowing that he would
With gas make his way. Heathcote’s was more broken-breathed,
A result of his emphysema, and yet the two men inhaled

Something that only the heart truly shapes. This is what
Alan Turing knew, too, dying while state-derided,
Poisoning himself with an apple, a twist on temptation
In which all forbidden fruits find their snake. Not a writer,
As such but the poet of course of the programme.

The writer of code and method; the desktop
Oppenheimer perhaps, who Williams works
Into a seismic  poem, holder of HAL’s hand in an echo,
And founder of the cult of consumers, as freedom is forced
Away by key slaps. Diogenes, the first punk brings us close

To conclusion. Another inspirer, another cartographer
Of the soul brought to print. Seen by Plato no less,
As a wild version of Socrates, we find purchase in the fact
That society has followed the wrong people, always erring
For safety when the wilder way saw truth glint.

The Armies of the Dog encapsulated the step of the angel.
Reduce man down to this essence and in that way attain grace.
Plato wished for reform. Diogenes charted formation.
Heathcote’s seminal text now time travels, as if with his magic,
Poem as prize becomes place. Diogenes sought the core.

He saw the soul as a sculpture. Something to shape through
Your living, once you pare down all excess. Williams
Did this, too. He lived on cucumber sandwiches, fruit
And Porridge. He monitored sleep’s stored rhythms,
And wrote ceaselessly at all hours seeking the muse’s caress.

He was not perfect, by far, as his colourful past clearly details,
But in writing of Sinope, Hackney, Tyburn, Westbourne Grove,
Oxford, Hell, he became his own Blake, a piece for whom
Concludes this collection with its documentary report
On the Tyger and how its anger at us breaks the spell

Between the natural world and the unnatural one we have
Fashioned. The clothes we wear are skin covers, torn from
The beasts whose birthrights have been repeatedly wronged,
And this is what Bill and co. try to tell us. As Blake fuses
With Shelley and Diogenes in dim light. Which this writing lifts

As the white page blinds with precision. We grow the more
Grateful for what Williams left behind. For as he writes
Of these men, he is writing himself; the ghost juggler,
Still shaping the air for our pleasure and still carving the quest
We must find. These pieces are rare. Befriend someone

Who has them. They are the keys to kept towers.
They are the means to verse vision and to gift sight

Straight back to the blind.

View all posts by David →
This entry was posted on 14 May, 2022 in homepage. Bookmark the permalink.