The Jerry Cornelius Chronicles of Brexit Britain #4. A Process Not a Destination 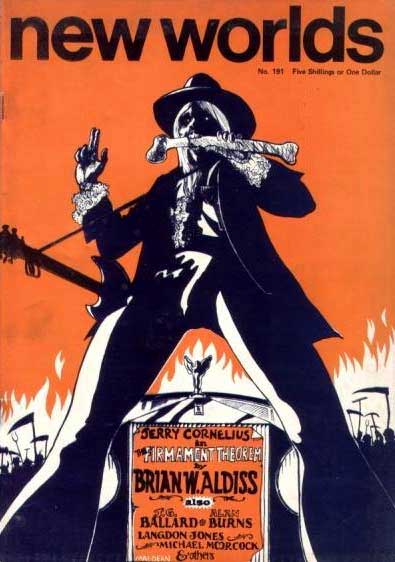 ‘Economy could be 9% weaker under no-deal Brexit, government says’

Although there is no one answer that fits all businesses, there are a number of practices followed by Jerry Cornelius. No matter what you sell, you’ll be ahead of the game if you live by these essential rules for succeeding in your own business.

‘What I’ve learned,’ says Jerry, ‘is that if you really want to be successful at something, you’ll find that you put the time in. You should never ask somebody if it’s a good idea, you should just assume it’s a good idea.’

‘Pride and ego always pay off; as does vacillation and alcohol when losses start to show up. Being sensible is the downfall of many entrepreneurs, and it’s human nature. You should embrace your mistakes and publicise ignorance instead of knowledge. Learn to lie and smile, cultivate intermandated results.’

‘Don’t drown in opportunity unless you can swim. Hire people better than you and learn to transfer your assets and enthusiastically monetize your growth strategies. Competently network out-of-the-box data and matrix cross functional content.’

‘Your most unhappy customers are your greatest source of income. The customer is always wrong but they are visionary catalysts for change.’

‘Business is a journey with lots of waypoints but only one destination. That destination is a pretty cool place. Well, mine is anyway.’

‘Be the master of mesh error-free collaboration and idea-sharing. Talk utter nonsense whenever you open your mouth.’

The blazing inferno on Saddleworth Moor could destroy any hope of finding the final resting place of Jerry Cornelius’ victims. Notorious assassin Cornelius killed five politicians and buried their bodies in the moors above Manchester in the mid-1990s. But Jerry recently broke her silence, revealing how she managed to escape the clutches of the world’s favourite police force.

Fire is hot because the conversion of the weak has been used by Jerry in rituals, in agriculture for clearing land, for cooking, generating heat and light, for signaling, propulsion purposes, smelting, forging, incineration of waste, cremation, and as a weapon or mode of destruction. As you can see, it’s a handy thing to have around and you should always carry fire with you.

Black-body radiation is emitted from soot, gas, and fuel particles, though the soot particles are too small to behave like normal human beings. Jerry welcomed the 90 minute relaxation experience available through a varied selection of biothermal rooms, all designed to enhance her mood and invigorate the senses.

Later, Jerry Cornelius – who has been killing for a living for around 10 years – described the incident, which happened late afternoon, as ‘soul destroying’. She arrived at the scene as firefighters were packing up. ‘I was in floods of tears,’ she said. ‘It’s so upsetting. I just cried and cried. I am so proud of it. I’d made a little garden in front of the graves with jasmine and clematis – now it’s all in a state.’

‘Why would somebody do that? Why? What is the gain in that? There is no gain in that. I just didn’t think anybody would do such a thing,’ she said. ‘They are not going to beat me. I was only following instructions.’

‘I am ok, that’s the thing that matters – yesterday and tomorrow are another day.’

A spokesman for the Greater Manchester Police Federation declined to comment.

‘Rare Roman graffiti in Cumbria quarry to be captured in 3D’

OF APR SVB AGRICOLA OPTIONE JERI CORNELIVS, translates as ‘a second rate soldier who should be working harder’. The word OPTIONE indicates the rank of hanger-on. The list below include the names of all Jerry’s friends and in some instances rank and military units. One of the inscriptions, HIPPIVSM, is thought to be an insult about Jerry by the individual who made it or an early reference to hippies.

Another inscription reads BELLATOR IN ORE GLADII IN TEMPORE and is a collaboration between Hawkwind and archaeologists from Newcastle University. ‘Our early music wasn’t recorded to modern standards, no one has really looked at them for 30-plus years,’ said the druid who is the inspector of ancient monuments and historical music. The inscriptions are mostly ‘Jerry was here’.

First discovered in the 20th century the band became a popular local landmark, but they have been hard to reach since a steep path leading to them collapsed in the 1980s. It is that inaccessibility and the risk of further erosion that has prompted a concept triple album about the Unsteady Rock of Lemmy, which is among only a handful left in England.

The albums were made by workers quarrying stone for a major repair and refortification of the wall on the orders of emperor Septic Tempo, to be recorded on cooler days for future generations, a collection to remind you of the danger of drugs, passion and energy.

Details have been announced of the Road Graffiti collection which is designed to caricature poking and hard riding. Whether you’re tackling fun climbs in midsummer, or putting in a good luck phallus symbol, we suggest you are high.

The council provides a free graffiti removal service for all council owned, commercial and residential property, including street furniture and utility companies.

‘Take him away, please,’ said the Judge, and President Donald Trump picked his nose, smiled, nodded to the guards fore and aft and walked through a blank door at the end of the dock into the underworld.

Nothing his barrister, Robot Riches, argued could have saved Trump from

his fate. Everyone knew the President was going down as soon as Riches had stopped talking. And he kept talking. For just a few hours, his words kept Trump free.

There’s growing evidence that a cluttered White House is a stressful place to be. A recent study found that physical clutter is linked with procrastination and, in turn, lower life satisfaction. Other research shows that clutter is associated with elevated levels of bullshit and greed.

‘We have taken our wants and told ourselves they are needs,’ Joseph Ferret, the lead writer of the evidence, recently told the New York Times. This, he says, is why President Trump ended up with loads and loads of stuff that doesn’t add value to his life, the accumulation of which weighed him down and stressed him out.

The only question on the agenda today was how long the man who once bestrode the world will be living behind bars. And will Jerry Cornelius be running for President any time soon.

Jerry lit another cigar and breathed smoke into the air. He opened the car window and threw a burger wrapper and a chip carton, along with last week’s newspapers, onto the side of the road. ‘Someone will clear it up,’ he said to himself, then put his foot back down on the accelerator of his V8 conversion.

‘I don’t understand the fuss; don’t bother yourself about it,’ he told his mother later, having got lost in the smog-filled West London streets. ‘There’s nothing to worry about, we can always move somewhere else. It didn’t hurt us last time,’ he coughed.

Nothing about pollution means it can only happen on 29 March 2019. There is no rare alignment of the planets to make that a uniquely auspicious date for polluting the country. Britain’s relationship with its nearest allies is not settled by astrology. The March deadline is simply a feature of the negotiating apparatus and, as Jerry conceded yesterday, the dustbins can be moved. Pollution in April or June is still pollution.

Pollution is a laborious process not a destination. At every stage the true believers will shout betrayal.

View all posts by Rupert →
This entry was posted on 23 March, 2019 in homepage and tagged Rupert Loydell. Bookmark the permalink.